Putin has squandered the moral credit conferred on Russia by its immense contribution to the defeat of Nazi Germany. That truth will be devastating to the Russian mind and soul.

April 15, 2022 David A. Mayers History News Network
Printer friendly
Russia – and Not Just Its Army – Is Headed for a Crisis of Morale Published April 15, 2022 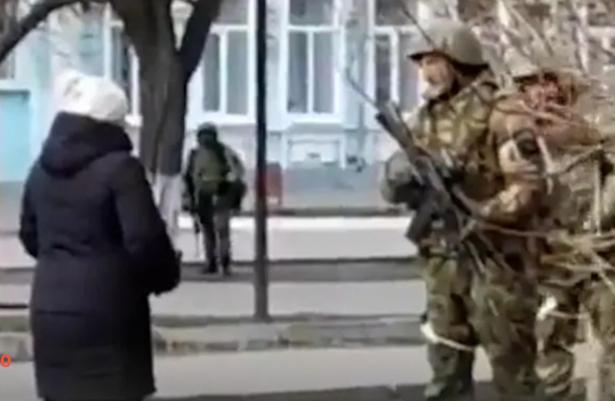 In a viral image from early in Russia's invasion of Ukraine, a woman tells a Russian soldier "put some sunflower seeds in your pockets, so when you will be buried in my land, the sunflowers will grow." ,

Russia is on the brink of a morale crisis. This amounts to a reckoning that has implications more far-reaching than whether Putin stays in power or manages to end his Ukrainian war on terms favorable to Moscow. The truth will come out, eventually. It always does, and in every country, no matter the hurdles emplaced by state propaganda, censorship, and varieties of intimidation. And the truth will be devastating to the Russian mind and soul, far more upsetting than even the economic and other hardships now crashing down on Russia.

Putin has squandered the moral credit conferred on Russia by its immense contribution to the defeat of Nazi Germany. The tale of the Great Patriotic War is one dear to the Russian nation and has long been rehearsed in novels, movies, plays, and public monuments. Each of these attests to the rigors of that earlier war and extols the people’s heroism, sacrifice, gallantry, and triumph. Every Russian, irrespective of education or social standing, can recite this inspiring story—from the siege of Leningrad, to the battle of Stalingrad, to the storming of Berlin. Admittedly, Russia’s moral credit was taxed during the Cold War and some nonconformists raised inconvenient questions about the cult of the Great Patriotic War. But this moral credit was never exhausted, not even by the suppression of Hungarian reformers in 1956 or the 1968 crushing of the Dubcek regime in Prague or the 1979 invasion of Afghanistan. But now, thanks to Putin’s Ukrainian folly, the moral credit treasured by Russians since 1945 has been depleted.

Think of the awareness now dawning upon young conscripted Russian soldiers involved in a bungled war, evidently waging it without reliable logistics, and all the while enduring high casualty rates. The grandparents and great grandparents of these conscripts—as repeatedly taught via family lore and official accounts—won the greatest war in history and were decisive to saving humanity and civilization. But now, rooted in the experience of conscripts in Ukraine and through them seeping into broader Russian understanding, an inverted new tale is taking shape.

There is a glaring discrepancy between what Putin has said to justify his war and what conscripts in Ukraine are learning. The typical Russian conscript, whose age corresponds roughly to that of American college students, is not encountering Nazi drug addicts trying to perpetrate genocide against ethnic Russians. Not only is Putin’s mendacity revealed by the absence of Nazi villains. So, too, Putin’s nonsense about Ukraine as a bogus country without genuine identity is evidenced to conscripts by the steadfastness of Ukrainian soldiers that they fight and the vast support given them by civilians. These civilians, incidentally, include grandmothers of a kind familiar to any young Russian conscript. Now (and in coming weeks) he must withstand tongue-lashings from people who look like and sound like his own babushka—older women infuriated by the outrages committed by Russian lads in uniform, who by custom should be respectful of their elders, protective of the innocent, and bearers of sturdy morality.

In a foreshadowing of denunciations to come, an eighty-year old grandmother (a Russian incidentally) recently wrote an open letter to Putin’s young soldiers. It included these words:

“What will you gain from murdering your Ukrainian neighbors, who did not want war? Where is the joy in destroying an independent country that does not belong to you? . . . People around the world hate the destruction you’ve caused. Thousands of antiwar protestors in Russia will not respect you . . . Wake up from being brainwashed by false propaganda . . . The ghosts of murdered women, children and defenders of their country will haunt your nightmares.”1

In effect, as the Russian soldiers in Ukraine will have to admit on the basis of their experience, the cloak of heroism has slipped off. Slipped off from Russia and settled on Ukraine, its people, and its leader. Mariupol has replaced Leningrad as a besieged city defiant against overwhelming odds. Kyiv and Kharkiv have replaced Stalingrad as sites of a brave people fighting for life against a ruthless foe. The image of Zelensky staying at his post has replaced that of Stalin in beleaguered 1941 Moscow. Meanwhile, the idea long cherished by Russian apologists—namely, that their country is the true champion and guardian of Slavdom—has been discredited by scorched-earth warfare against the nation that most closely resembles them in language, religion, culture, and tradition. And worst of all, Russians are not the saviors but have become the invaders, a proposition utterly demoralizing to every young Russian conscript and to his family and friends. This portends an existential bleakness radiating from Putin’s war that must prove difficult to surmount and will linger for decades. During which time, Ukraine, with assistance from various countries, will eventually repair its cities, rebuild its economy, resettle millions of its uprooted citizens, and bask in the hard-won confidence implicit in a Ukrainian version of the Great Patriotic War.