“The funds set aside for the State of Nebraska could serve tens of thousands of households, helping those families avoid eviction and the many consequences of losing their homes,” 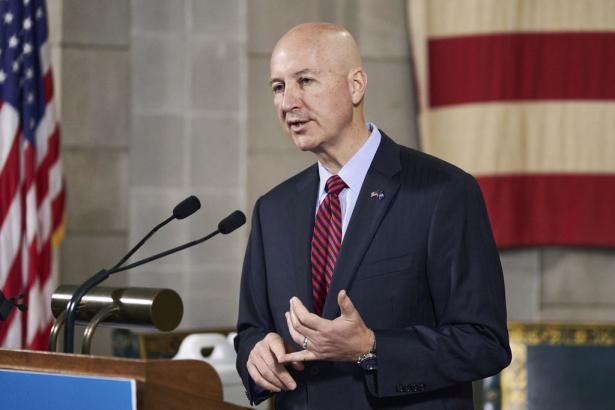 When Brian Vickers, a mechanic who fixes antique tractors, temporarily lost his job during the pandemic, the single father worried he could lose his two-bedroom home on the edge of Omaha.

So the staunch Republican turned to the government for help making his $775 monthly rent for the house in one of the area’s coveted neighborhoods.

It was a lifeline.

“I’m not one to live off the government, but it’s sure helped me support my son and be there for him,” Vickers said of the federal assistance. “I don’t have to wake up every morning and go, ‘Hmm, where is this going to come from?’ ”

But other struggling tenants in Nebraska may not be so lucky. Governor Pete Ricketts, a Republican, has declined to spend $120 million in federal housing assistance funds, claiming the aid risks turning Nebraska into “a welfare state.”

That decision is likely to worsen an escalating housing crisis there, and provoked a rebuke from the deputy secretary of the US Treasury, who told Ricketts in a letter on Friday he was “disappointed” and warned the move would shortchange thousands of Nebraskans in need, especially in rural areas.

The $46 billion pandemic-related initiative, the federal government’s first attempt to create a national rental assistance program, is estimated to have prevented at least 1.3 million evictions, according to housing experts.

But as in Nebraska, hundreds of millions of that money is going unused, after some mostly Republican-controlled state and local governments failed to spend their share or declined some aid entirely. Tenants in rural and sparsely populated counties are at particular risk of losing their homes, with many rural areas recording above-average eviction filings, according to Peter Hepburn, a research fellow at the Eviction Lab at Princeton University.

Now, after repeated warnings from the Treasury for states to act quickly or risk losing funds, the Biden administration is yanking some of the unused money back and sending it to more populous states that are eager for it.

In March, the Treasury reclaimed $377 million in rental aid, including $11 million from Nebraska, $45.3 million from Montana, and more than $39 million from West Virginia. North Dakota returned nearly half its funds. The federal government then sent that money to New York, California, and New Jersey — states that clamored for more help to weather a severe housing crises.

If Nebraska doesn’t accept at least 40 percent of the funding it declined by April 30, the remaining 60 percent may be reallocated, the Treasury warned. The state’s largest counties, covering Omaha and Lincoln, are eligible to apply for the federal housing aid on their own.

“The funds set aside for the State of Nebraska could serve tens of thousands of households, helping those families avoid eviction and the many consequences of losing their homes,” Deputy Treasury Secretary Adewale Adeyemo wrote to Ricketts.

The transfers have unleashed a wave of caustic clashes in largely Republican-controlled state legislatures, as advocates and community groups clamor to claim the last remaining dollars.

They also underscore how the federal government’s first effort to mount a national rental aid campaign has not reached some rural Americans in regions governed by politicians skeptical of the aid, or where the local government lacks the infrastructure to distribute it.

“Over the last couple of months, we heard from communities all across the state, especially smaller communities in rural Nebraska, that there was a need, that it was pervasive, and that it was growing,” said Erin Feichtinger, director of policy and advocacy at the Together homelessness nonprofit in Omaha. “When we run out of the money, there’s going to be no safety net.”

More populous states that spent the cash fast are running out, too. In Massachusetts, where applications for relief ended on Friday, funds from the program are likely to run out by June 30. The state received nearly $800 million in federal rental assistance, and disbursed $651 million to renters as of the end of March. Massachusetts has not received any of the funds the Treasury clawed back from other states.

Yet with need growing across the country, some experts argued the clawbacks are a necessary course correction after rural states were given too much money relative to their renter population.

The program distributed rental funding by total population, without taking into account the number of renters. So states such as Montana, which has a relatively small number of renting families, received more funding than it likely could have feasibly spent, Hepburn said.

“Reallocation allow[ed] dollars to flow to places with high need and the capacity and systems to meet those needs,” Poyo said. “Generally, reallocated funds went to higher-need areas with more diverse communities.”

But some advocates tell a different story. They stress the problem is not lack of demand in rural areas, but poor infrastructure and flagging political will that kept the money tied up.

Diane Yentel, president of the National Low Income Housing Coalition, said that while certain states received more money than they could have spent, others moved too slowly to disburse the funds.

In Nebraska, rental aid got off to a tepid start.

The state contracted with Deloitte, a multinational financial services firm, to oversee distribution of the $120 million it received in the first tranche. Community groups said Deloitte was notoriously hard to reach.

“There was never follow-up” on applications, Andy Marsh, a landlord who runs Keystone Properties in Grand Island, told state lawmakers in February. “We’d sit on hold for three hours to see what they were waiting for. So then the process started all over again, and we’d have to wait 45 days.”

A spokesperson for Deloitte defended its system in a statement as “user-friendly” and “accessible” and said its average application processing time is 8 to 10 days.

Nebraska still has $44 million in unused rental aid, which Ricketts cited as one reason for refusing an additional infusion of funds. A spokeswoman for Ricketts said the amount is “more than enough” to meet people’s needs.

To Feichtinger, from the homeless organization in Omaha, the state’s failure to use the federal funds is a result of bad decisions and unforced errors. The state relied on local community groups to distribute pandemic CARES Act funds, which was a success. By contrast, relying on a corporation to distribute rental aid was a misstep, she said. “There was a model, a precedent,” that wasn’t followed, she said. “It’s inexcusable and there was no good reason for it.”

Similar problems plagued other states, rural and urban, according to Claudia Aiken, a director at the Housing Initiative at the University of Pennsylvania who’s been researching the federal effort, known as the Emergency Rental Assistance Program.

Complex documentation, lack of staff, and difficulty reaching tenants all contributed to slow spending of the federal aid in many of the laggard states, her team’s research found.

Most states have exhausted the majority of the first round of funds, according to the National Low-Income Housing Coalition. But 15 states are still sitting on big piles of money: Republican-controlled Ohio and Georgia have approved a little more than one-third of their first round of funding, and have yet to dip into the second. In South Dakota, only 10 percent of the first batch of $120 million in rental assistance reached households.

Congress is unlikely to replenish the program. So Treasury officials are telling states to put other federal funds from the trillions in COVID aid that’s been disbursed in recent years toward affordable housing and eviction prevention. But advocates doubt state officials would redirect the funds to other housing efforts if they’re opposed to using them for eviction prevention.

Vickers, the Nebraska tenant, considers himself a fiscal conservative, generally wary of government spending. And he voted for Ricketts. But asked what he thought of the governor’s move to reject federal aid, he didn’t mince words.

Pranav Baskar can be reached at pranav.baskar@globe.com.