Pilar González Kelly is a sophomore studying public policy at Duke University and long-time reader of Portside. This op-ed is an original submission to Portside.

April 18, 2022 Pilar González Kelly Portside
Printer friendly
The JFK8 Union Must Be a Spark Towards a New Reality in Labor Relations Published April 18, 2022 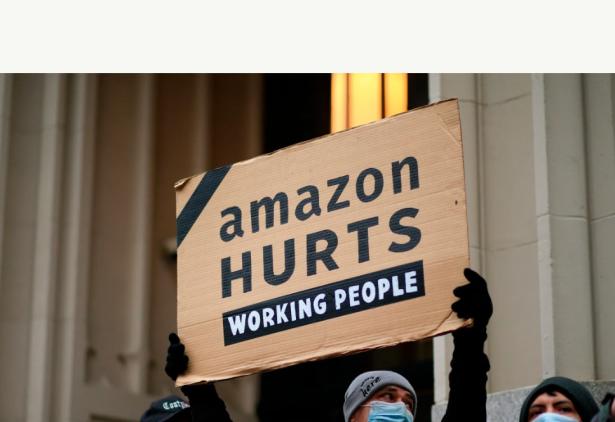 On the first of April, thousands of Amazon warehouse workers voted to form the first union in the company’s history. Their unlikely victory against the $1.5 trillion behemoth’s union-busting campaign is arguably the most significant accomplishment for labor rights since the 1930s. Together with newly-formed Starbucks unions across the country, a post-pandemic labor rights movement has taken the media by storm and could represent a turning point in union influence. It's clear that this generation is growing tired of corporate interests dominating our government and society, treating “essential” workers as disposable in the name of productivity. And now, an independent pop-up group of workers has toppled America’s wealthiest and most influential company. Amazon used to be deemed unorganizable. If Amazon can be unionized, no company is untouchable. We must capitalize on the momentum generated by the JFK8 workers high-profile victory and pressure Congress to pass durable labor reform legislation.

History has shown that major strides in labor reform have occurred when a spark triggers a wave of victories. In 1937, the United Auto Workers sit-down strike won them a GM contract and inspired hundreds of union wins across the country. However, union influence has since decreased rapidly due to corporate aggression in the age of neoliberalism. But labor scholars believe we could be on the cusp of a major shift in the labor relations order, especially because of recent media and public interest. The approval rate for unions is at a 60-year high.

New legislation must guard against the (legal and illegal) union-busting tactics employed by Amazon. Amazon poured over $4.3 million on union avoidance consultants in 2021 alone, bombarding workers with posters, flyers, emails, videos, direct text messages, and even a website with one emphatic message: “Vote No.”  Managers held mandatory captive audience meetings spewing anti-union propaganda, threatening lower pay and less benefits. Recently, there have been reports that Amazon’s worker chat app is banning words including “union,” “I hate,” “unfair,” and “restroom” (a reference to limited bathroom breaks causing workers to have to urinate in bottle). Collective bargaining is a widely recognized human right, and Amazon’s censorship and propaganda is an incredibly dangerous infringement on working class rights. If business owners are allowed to promote their economic interests in Congress, working people should have the right to have a say in policies that affect their livelihoods.

Amazon pushed the oft-used anti-union narrative that workers would be “giving up the right to speak for themselves,”implying that Amazon employers genuinely have their workers interests in mind when company policy has proven the opposite. At the dawn of the pandemic, Amazon extended a $2-per-hour pay bonus but revoked it at its peak, leaving workers at fatal risk while Jeff Bezos collected $75 billion from their labor in 2020. Unions are created to guard against this very ability for employers to enact or revoke life-death-policies at will.

Secondly, Amazon’s #DoItWithoutDues slogan pushes the false narrative that unions steal worker’s cash. On their anti-union website, a picture of a corgi bops to music behind a message telling workers that they would have to choose between buying dinner and paying dues. In reality, union workers consistently out-earn nonunion workers—in 2019, nonunion workers earned 80% of what union workers earned. It is true that unions require dues. But the whole point of collective bargaining is that workers will earn higher wages in return.

Employees should feel free to make their own decisions without being bombarded by intimidation and propaganda. Why should workers trust that Amazon cares about them when they literally work them to death?

This gross union suppression must be regulated. Capitalist’s greatest deceit is sowing a fear among the workforce that resistence is futile. The workers at JFK8 have shown the world that this is a lie. We must ensure that their bravery is not an isolated success, but the first wave in a labor revolution. We need stronger protections against union busting: outlawing mandatory captive audience meetings and other intimidation tactics, guarding against retaliatory termination to ensure that workers are only fired for just causes, and guaranteeing that if a worker wants to be in a union, they have the freedom to. The workers of the world have ushered in a new era of justice, and we cannot let it slip away.

[Pilar Kelly is a sophomore at Duke University]