Whose Side Are We On? The War in Ukraine and the Crisis of the Left

Whose side are we on? That is the question that anyone professing a commitment to anti-imperialism should be asking, when a sovereign nation is invaded by a Great Power.

April 21, 2022 Van Gosse and Bill Fletcher, Jr. Portside
Printer friendly
Whose Side Are We On? The War in Ukraine and the Crisis of the Left Published April 21, 2022 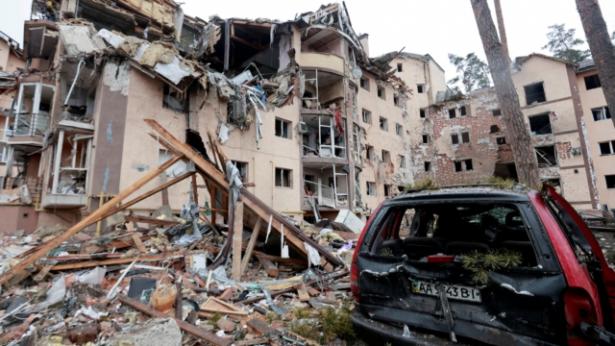 A residential building that was destroyed by recent shelling in the city of Irpin in the Kyiv region, Ukraine , Photo: Reuters/Serhii Nuzhnenko // inews.co.uk

Blinded by American Exceptionalism, however, many of the U.S. Left are not able to answer the question, and their silence speaks.

We must always oppose empire, under any heading. No nation has the right to dominate another, let alone invade and occupy it.  That was the principle we as leftists affirmed in 2003, when George W. Bush led the United States into a war of aggression against Iraq.

We should state it plainly, in terms of international law.  Aggressive war is the first crime of war, from which all the others flow. As the International Military Tribunal at Nuremberg stated, “To initiate a war of aggression, therefore, is not only an international crime; it is the supreme international crime differing only from other war crimes in that it contains within itself the accumulated evil of the whole.” Vladimir Putin has now committed this crime of war, and that is the premise from which we should analyze the crisis in Ukraine: Whose side are we on? That of the war criminals who started the war, or those who are defending their sovereignty?

For ourselves, we are on the side of the Ukrainian people against an unprovoked war of aggression by an imperialist Great Power demonstrating in unmistakable terms what V.I. Lenin denounced as “Great Russian chauvinism.”

Here are some questions to consider.

Does Russia have “legitimate security interests” in Ukraine and other nations bordering it?

That premise has been affirmed repeatedly by various antiwar organizations, so we need to underline:  states large and small have one legitimate security interest, which is to have their sovereignty respected—not to be invaded, bombed, blockaded, or subverted.

That is the limit of Russia’s security interest regarding Ukraine. It has no “legitimate interest” in dominating, controlling, or dictating policy to the states bordering it, any more than the U.S. does.  Many of us have spent decades denouncing the politics of the Monroe Doctrine, what Theodore Roosevelt defined in 1904 as the U.S.’s right to “the exercise of an international police power” in the Americas, which led to military occupations all over the Caribbean and Central America between 1898 and 1934, the CIA-organized coup in Guatemala in 1954, and the invasions of Grenada in 1983 and Panama in 1989. That is what it looks like when a Great Power claims “a sphere of influence.” No one claiming to be anti-imperialist should concede any legitimacy to a Russian “sphere of influence.”

As anti-imperialists we oppose militarism in any form, including permanent military pacts, and the aggressive militarism promoted by the U.S.-led NATO alliance.  The best way to protect the rights of small nations is to seek demilitarization in Europe and everywhere else. But it is utterly wrong for us to dictate to nations in Eastern Europe whether or not they join an alliance because of the concrete threat that Russia poses to their sovereignty.  This is the message the Left in those countries has sent us, and we must respect it as a basic principle of internationalist solidarity. We have no more right to tell them what to do than the U.S. does to pressure or subvert the government of Canada if it chose to leave NATO and conclude a treaty of friendship with China.

Doesn’t the United States share responsibility for this war?

Like all major historical events, the war in Ukraine has many causes, and many actors were involved.  Focusing on what the U.S. did or didn’t do takes the focus off who started it, and absolves Russia from its sole responsibility for initiating a war of aggression.  Beyond that, it betrays an Americo-centric view of the world that is at odds with reality. The United States is no longer a world hegemon, it does not determine the course of history, and presuming its centrality makes the U.S. into an exception, standing outside and above the normal relations between states.

Shouldn’t we focus on peacekeeping by opposing all weapons transfers to Ukraine?

The Ukrainians have a right to defend their country, and that includes the right to seek aid from anywhere they see fit.  It is everyone’s interest to keep this war from spreading, so we should oppose any measures, such as a no-fly zone, that would widen the zone of war across international borders and draw in more nations.

We are not pacifists. The Left should avoid confusing pacifism, as in opposition to war in any form, with anti-imperialism.  We cannot stand aside and simply condemn the violence.  It is in Putin’s hands to stop the war now; until then, we take the side of the Ukrainians.

[Van Gosse is a Professor of History at Franklin & Marshall College, and Co-Chair of Historians for Peace and Democracy.

Bill Fletcher, Jr. is a past president of TransAfrica Forum and a longtime trade unionist and writer.]