On justice, impunity and ridicule: the historic outcome of the 2022 trial in Burkina Faso against Thomas Sankara’s killers. 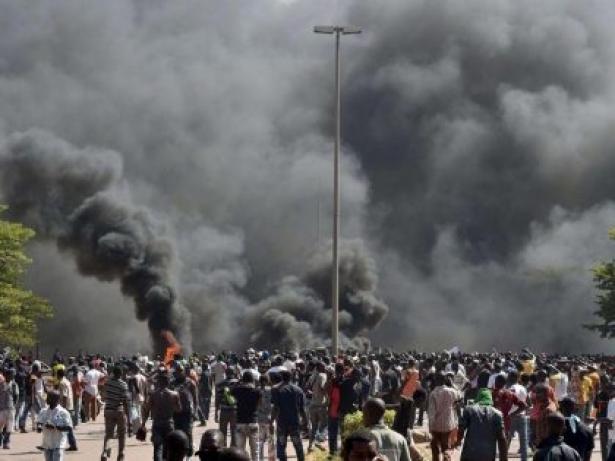 In a play I watched 15 years ago in Ouagadougou, a character on stage indignantly cried “Everyone knows who killed Sankara!” His counterpart quietly replied “Really?” The audience held its breath tensely. The first character, deflated, mumbled “Yes … it was malaria.” Bursts of cathartic laughter.

Today Burkinabe no longer resort to such subterfuge to talk about Thomas Sankara’s death. A historic trial in Ouagadougou last week established responsibility for the assassination of the iconic revolutionary leader and his 12 companions during the coup of October 15, 1987. The stiff sentences of life imprisonment handed down to the three main accused, former President Blaise Compaoré (who succeeded Sankara), and two senior members of his military command, Hyacinthe Kafando and Gilbert Diendere, also sent messages that many Africans have been yearning for: impunity has its limits, and dreams shall not be killed.

The dream that cannot be killed is that of continuing what Sankara achieved in his four short years of rule. Remembered for being a thorn in the side of Western powers—France in particular—through his relentless challenges to the neocolonial world order, Sankara stood out for the extent to which he actually walked his talk. Applying his vision of integrity and self-reliance, he was uncompromising on corruption and drastically reined in government waste, obliging ministers to trade in luxury cars for simple Renault 5s and fly in economy class.

Thanks to his sincerity, at a time when most Africans languished in morose post-independence hangovers, Sankara galvanized Burkinabe to invest their own money and labor in community infrastructure development. In 1987, the Food and Agricultural Organization noted with astonishment how quickly Sankara had helped the dry Sahelian country to finally achieve food self-sufficiency. Particularly prescient on environmental issues, Sankara obliged every resident to plant at least one tree, and one government program planted 10 million trees in just fifteen months. With clear-eyed foresight, in a 1985 speech to forest rangers, he warned that the destruction of the Amazon rainforest would have devastating consequences for all. Sankara summed up his greatest achievement as being getting Burkinabe to have confidence in themselves and in their ability to shape their own destiny.

The Sankara trial, which ran over six months and saw 110 witnesses take the stand, was serious business. But it also had its moments of ridiculous revelations, with disclosures of details that could have come straight from the mind of satirical playwrights. Ousseni Compaoré, Sankara’s chief of military police, revealed how he stumbled upon Sankara clearing out his office desk drawers before traveling abroad. Sankara explained that he knew full well that in his absence Blaise always found an excuse to occupy his office, and thus this was a habitual precaution he took.

There was also the story of soldier Bossobe Traoré, whom the trial acquitted, confessing to his 1987 girlfriend, while she served him soup and beer at her eatery, that they may never see each other again because in a few days there would be a coup against Sankara. The eatery was called La Buvette Coloniale (the Colonial Bar). What more ironic a setting could there be for a Judas-like betrayal of an African leader celebrated for standing up to colonial powers?

The weightier moments of ridicule involved adults stubbornly refusing to take responsibility for their past actions. Soldier Nabonswende Ouédraogo, sentenced to 20 years imprisonment, will likely need more time than that to live down the ridicule of his defense. When a witness account placed him in the thick of the action during the coup, he explained that the witness must be confusing him with another soldier, a certain “Nasonswende.” The prosecution lawyer pointed out that the so-called Nasonswende was a good deal taller. Undeterred, Nabonswende went on to explain that while he was present at the Conseil d’Entente, the military headquarters where the fatal shootings happened, when he heard shots, despite all his years of military training he chose to jump, fully armed, into an empty swimming pool where he remained from 5pm until 9am the next day.

Nabonswende of course was just small fry in this trial, though it is worth pointing out that other subordinates, doing little more than following orders, who owned up to their actions, such as soldier-driver Yamba Ilboudo, received lighter sentences. The readiness with which the higher-ranked accused adopted ridiculous stances, however, is a greater cause for consternation.

General Gilbert Dienderé, at the time responsible for the security of the Conseil d’Entente camp and chief of the commando that carried out the coup attack, to his credit, actually turned up for the trial, unlike Compaoré and Kafando who had to be judged in absentia. (To his discredit, Dienderé had little choice as he was already in prison for a coup he led in 2015, one year after Compaoré’s fall.) However, for someone who held posts which required a high level of responsibility, he claimed responsibility for practically nothing. In his version of the fateful day, he had left the Conseil d’Entente in the afternoon by a small gate in the back for the obligatory Thursday sports session a few kilometers away. When he heard the shots, he made no use of the walkie-talkie he had at his disposal as a senior command, but decided to trot back “prudently” to the camp unarmed and in his tracksuit to find out what was going on. He arrived to find Sankara and his companions dead, and concluded that a member of his commando had taken an unfortunate and unilateral initiative to arrest Sankara. The judges chose instead to believe the witness accounts that placed Dienderé at the camp just before the act, and that indicated he had clear foreknowledge of the planned coup and was being reported to by those tasked with carrying out the plan.

Compaoré, exiled in Cote d’Ivoire since his ousting by the 2014 mass insurrection, simply boycotted the trial. Compounding this dismaying lack of courage was Compaoré’s choice of lawyer: Pierre Olivier Sur, a Frenchman (moreover the only white lawyer of the trial) who seemed incapable of not dripping with disdain for Compaore’s country. At the outset of the trial, on RFI radio, Sur, with cheerful scorn questioned, how serious any proceedings that were to be held in a “banquet hall” could be. The choice of this large infrastructure, moreover built by the Compaoré regime, was made to permit a larger audience to attend the trial, and luckily so, as on April 6, 2022, the 1000-seater hall was packed full with family members and ordinary citizens eager to hear the verdict of what Sur repeatedly dismissed as a “sham” trial. (In the inevitable film version of the trial, Sur’s character would likely loosen his inhibitions and just go ahead and call it a “banana-republic” trial). Interviewed after the verdict from Paris, Sur called for it to be thrown into the “dustbin of judiciary history,” as the Burkinabe court’s decision would certainly be overturned by more competent international courts. Aside from claiming that his client had not received legal summons, he did not give much detail on why a historic trial for Africa belonged in a dustbin.

Sankara, despite his great popularity, was nonetheless a divisive figure at home. Not all Burkinabe welcomed the outcome of the trial. Supporters of Compaoré and Dienderé said the stiff sentencing thwarted efforts at national reconciliation. They forget perhaps that reconciliation requires, first, actual dialogue (Compaoré refusing to attend the trial excluded this possibility), and second, speaking honestly and with responsibility. Before the overflow of citizen frustration resulted in the 2014 insurrection, several opportunities were offered to Compaoré to exit history through a respectable door; he ignored these, ended up fleeing his own country, and taking up his wife’s nationality to avoid extradition. Had either of the three condemned to life imprisonment shown the courage to play their part in reconciliation by recognizing their past errors, the sentencing likely would have been different. They would also have avoided the ridicule they poured on themselves.

A while back, Zimbabwean anthropologist Shannon Moreira, writing about the climate crisis in Southern Africa, asked: “What kind of ancestor do you want to become?” African leaders should regularly start asking themselves that question, for the Sankara trial shows that sooner or later history shines a harsh light on ridiculous irresponsibility. Ordinary citizens too need to ask themselves that question. One defense lawyer—unable to understand why Sankara did not flee when intelligence reports from several countries (Algeria, Cuba, and the US, among others) warned him of an imminent coup—stated, “If [Sankara] had been normal … in his place … I would have gone to Ghana and tried to make Blaise Compaoré’s life miserable from there. Or I would have gone to Fidel Castro’s Cuba. I would have taken my wife and two kids, and left behind Burkina Faso and its problems of under-development.”

These are only easy choices for those who do not ask themselves what kind of ancestor they will be. Sankara clearly understood that integrity, while sometimes supremely painful in the short term, always pays in the long term.

Yarri Kamara is a policy researcher, writer, and translator based in Burkina Faso.