Corporate Profits Have Contributed Disproportionately to Inflation. How Should Policymakers Respond?

The rise in inflation has not been driven by anything that looks like an overheating labor market—instead it has been driven by higher corporate profit margins and supply-chain bottlenecks. 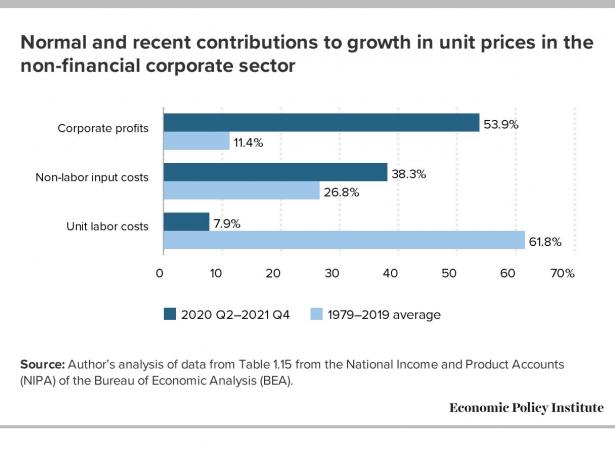 The inflation spike of 2021 and 2022 has presented real policy challenges. In order to better understand this policy debate, it is imperative to look at prices and how they are being affected.

The price of just about everything in the U.S. economy can be broken down into the three main components of cost. These include labor costs, non-labor inputs, and the “mark-up” of profits over the first two components. Good data on these separate cost components exist for the non-financial corporate (NFC) sector—those companies that produce goods and services—of the economy, which makes up roughly 75% of the entire private sector.

Since the trough of the COVID-19 recession in the second quarter of 2020, overall prices in the NFC sector have risen at an annualized rate of 6.1%—a pronounced acceleration over the 1.8% price growth that characterized the pre-pandemic business cycle of 2007–2019. Strikingly, over half of this increase (53.9%) can be attributed to fatter profit margins, with labor costs contributing less than 8% of this increase. This is not normal. From 1979 to 2019, profits only contributed about 11% to price growth and labor costs over 60%, as shown in Figure A below. Non-labor inputs—a decent indicator for supply-chain snarls—are also driving up prices more than usual in the current economic recovery.

What does the abnormally high contribution of profits to price growth mean for how policymakers should respond to the recent outbreak of inflation?

The rise in profit margins that account for a disproportionate share of price growth in the current recovery have led to speculation that increased corporate power has been a key driver of recent inflation. Corporate power is clearly playing a role, but an increase in corporate power likely has not happened recently enough to make it a root cause of the inflation of 2021–2022. In fact, the rapid rise in profit margins and the decline in labor shares of income during the first six quarters of the current recovery is not that different from the rise in the first few years following the Great Recession and financial crisis of 2008. Figure B below shows that starting from the trough of the recession (zero on the horizontal axis) that the fall in the labor share of income was actually more pronounced during the early recovery from the Great Recession than it has been so far in the recovery from the COVID-19 recession.

In the Great Recession recovery, increased corporate power did not manifest in faster price growth that made room for fatter profit margins—price growth was actually quite subdued over the first few years of that recovery. Instead, corporate power manifested itself in extreme wage suppression (aided by high and persistent levels of unemployment). Unit labor costs actually declined over a three-year stretch from the recession’s trough in the second quarter of 2009 to the middle of 2012. The general pattern of the labor share of income falling during the early phase of recoveries characterized most of the post-World War II recoveries, though it has become more extreme in recent business cycles (see Figures G and H in this report).

Given that the rise in profit margins was similar in the 2008 recovery and the current one, it’s hard to say that some recent rise in corporate power is the key driver of current inflation. Rather, a chronic excess of corporate power has built up over a long period of time, and it manifested in the current recovery as an inflationary surge in prices rather than successful wage suppression. What was different this time that channeled this power into higher prices rather than slower wage growth? The short answer is the pandemic.

One reason to think the pandemic is the root cause of the recent inflationary surge is empirical. The inflationary shock has occurred in essentially all rich nations of the world—it’s very hard to find any country-specific policy that maps onto inflation.

Another reason is to look where this inflation started: the rapid run-up of prices in the goods sector (particularly durable goods). The pandemic directly shifted demand out of services and into goods (people quit their gym memberships and bought Pelotons, for example) just as it also caused a collapse of supply chains in durable goods (with rolling port shutdowns around the world).

In previous recoveries, domestic demand growth was slow and unemployment was high in the early phases of recovery. This led firms to become desperate for more customers but also gave them the upper hand in negotiating with potential employees, which led to subdued price growth and wage suppression.

This time around, the pandemic drove demand through the roof in durable sectors and employment has rebounded rapidly, but the bottleneck in meeting this demand on the supply side was largely not labor. Instead, it was shipping capacity and other non-labor shortages. Firms that did happen to have supply on hand as the pandemic-driven demand surge hit had enormous pricing power vis-à-vis their customers.

A temporary excess profits tax could provide some countervailing weight to the pricing power firms currently have vis-à-vis their customers. Supporting such a tax does not mean that a sudden rise in corporate power is the root cause of current inflation, but it does mean that corporate pricing decisions in a pandemic-distorted environment are a propagator of inflation. It is also a recognition of the fact that price spikes in many sectors over the past year are not useful market signals about where the economy’s resources should be redirected, instead they are just an extreme but short-lived mismatch between sectoral demands and supplies that will naturally unwind as the global economy normalizes after the pandemic.

Calls are getting louder for the Federal Reserve to adopt a much more contractionary stance of monetary policy by raising interest rates sharply. The rationale for this is simply that today’s high inflation must be driven by an imbalance of aggregate demand (planned spending by businesses, governments, and households) and aggregate supply.

But over the entire post-World War II period, accelerating economic recoveries and falling unemployment that might indicate that the economy was running “hotter” have been associated with rising real wages and a rising labor share of income. The dynamic generally has been characterized by falling unemployment rates that increased bargaining power for workers that in turn led to real wage growth threatening to outpace economy-wide productivity growth. If this dynamic was allowed to get out of hand, the result could potentially be a wage-price spiral, with firms having to raise prices simply to meet workers’ wage demands and workers in turn demanding pay increases to insulate them from rising prices. To be clear, these instances of spiraling inflation driven by macroeconomic overheating have been far rarer than commonly characterized, but the pattern of lower unemployment leading to faster wage growth and filtering through to some slight upward pressure on inflation is clear and consistent in economic data.

Currently, however, the labor share of income and real wages are falling sharply in the recovery even as unemployment falls. It seems strange to see a pattern in the data that is the complete opposite of how overheating-driven inflation has historically worked, and not ask if it might be something different this time causing inflation (i.e., the pandemic).

Many of those most dismissive of claims that increased corporate power has driven recent inflation adopt the view that generalized macroeconomic overheating is the culprit. But in dismissing the increased corporate power explanation for recent inflation, they also seem to be discarding any useful information that recent sky-high profit margins might provide about the validity of their alternative view. Profit margins may not be telling us that very recent increases in corporate power are the root cause of inflation. But they are telling us that a simple macroeconomic imbalance of supply and demand is not driving inflation either, unless the relationship between a “hot” economy and profit margins and real wages is just coincidentally behaving entirely differently in the current recovery than it has in the past.

It is true that in very recent quarters—between the second and fourth quarters of 2021, for example—profit margins have ticked down slightly (but are still extraordinarily high in historical terms) and labor cost growth has been running well above historical averages. But even in this much more-recent period of the COVID-19 recovery, labor costs are contributing just 50% to price growth—well below their historic average. Non-labor inputs—the data signature of supply-chain snarls—have been contributing well above their historical average in this more-recent period.

The overheating view often emphasizes the atypically fast nominal wage growth of the past year as justification of their arguments. But this nominal wage growth—while fast compared to the very recent past—still lags far behind overall inflation and hence signals that labor costs are still dampening, not amplifying, inflationary pressures.

In short, the rise in inflation has not been driven by anything that looks like an overheating labor market—instead it has been driven by higher corporate profit margins and supply-chain bottlenecks. Policy efforts meant to cool off labor markets—like very rapid and sharp interest rate increases—are likely not necessary to restrain inflationary pressures in the medium term.

Other tools that would be less damaging to typical families—like care investments to boost expected growth in labor supply or a temporary excess profits tax—could be effective in tamping down inflation over the next year and should be a bigger part of the policy mix.

Josh Bivens is the director of  research at the Economic Policy Institute (EPI). His areas of research include macroeconomics, fiscal and monetary policy, the economics of globalization, social insurance, and public investment. He frequently appears as an economics expert on news shows, including the Public Broadcasting Service’s “NewsHour,” the “Melissa Harris-Perry” show on MSNBC, WAMU’s “The Diane Rehm Show,” American Public Media’s “Marketplace,” and programs of the BBC.

As a leading policy analyst, Bivens regularly testifies before the U.S. Congress on fiscal and monetary policy, the economic impact of regulations, and other issues. He has also provided analyses for the annual meeting of Project LINK of the United Nations and the Trade Union Advisory Committee (TUAC) of the Organization of Economic Cooperation and Development (OECD).

Bivens is the author of Failure by Design: The Story behind America’s Broken Economy (EPI and Cornell University Press) and Everybody Wins Except for Most of Us: What Economics Really Teaches About Globalization (EPI). He is the co-author of The State of Working America, 12th Edition (EPI and Cornell University Press) and a co-editor of Good Jobs, Bad Jobs, No Jobs: Labor Markets and Informal Work in Egypt, El Salvador, India, Russia and South Africa (EPI).

Economic Policy Institute
Join with us to build an economy that works for everyone
We need your help in order to continue our work on behalf of hard-working Americans. Our donors value our high-quality research, reputation for truth-telling, and practical policy solutions. Your tax-deductible gift to EPI makes you an important partner in providing this critical public service.
Donate