Russia’s war in Ukraine has reawakened fears about the bomb—and endangered the principle of deterrence. 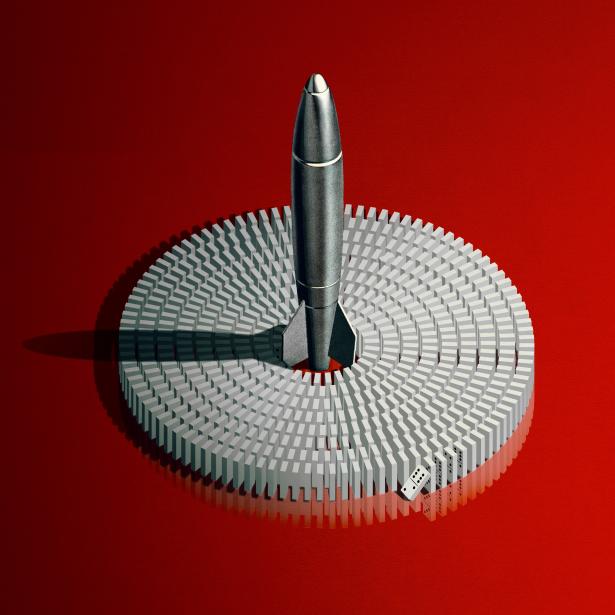 In his Nobel Peace Prize speech, in 1991, Mikhail Gorbachev, the last leader of the Soviet Union, pronounced that “the risk of a global nuclear war has practically disappeared.” Moscow and Washington had veered “from confrontation to interaction and, in some important cases, partnership,” he said. The Soviet Union’s collapse—which birthed fifteen new states, including Ukraine—transformed the world. In the new Europe, Gorbachev added, every country believed that it had become “fully sovereign and independent.” Historians imagined that the end of the Cold War would lead to the demise of the nuclear age, amid new diplomacy and arms-control treaties. The ingrained fears—that kilotons of destructive energy and toxic radiation could decimate a city and incinerate tens of thousands of human beings—began to dissipate. Beyond policy wonks, the word “nuclear” largely dropped from the public lexicon.

Vladimir Putin’s war in Ukraine has jolted the world back into an uncomfortable consciousness of the nuclear threat. In the past month, official warnings have emerged at a striking pace. “Given the potential desperation of President Putin and the Russian leadership, given the setbacks that they’ve faced so far militarily, none of us can take lightly the threat posed by a potential resort to tactical nuclear weapons or low-yield nuclear weapons,” William Burns, the C.I.A. director and a former ambassador to Russia, warned on April 14th. The U.S. assessment of when and why Moscow might use such weaponry has changed, Lieutenant General Scott D. Berrier, the director of the Defense Intelligence Agency, conceded in testimony to a House Armed Services subcommittee. A prolonged war in Ukraine will sap Russia’s manpower and matériel, while sanctions will throw the nation into an economic depression and undermine its ability to produce more precision-guided munitions and conventional arms, he said. “As this war and its consequences slowly weaken Russian conventional strength, Russia likely will increasingly rely on its nuclear deterrent to signal the West and project strength to its internal and external audiences.” Putin’s aggression is “reviving fears” of a more “militaristic Russia.”

The Kremlin’s successful test, on April 20th, of a missile capable of flying at hypersonic speeds and carrying up to ten nuclear warheads anywhere in the world—and of outsmarting defense systems—contributed to the ominous optics. “This truly unique weapon will force all who are trying to threaten our country in the heat of frenzied, aggressive rhetoric to think twice,” Putin boasted on state television. Last month, Washington cancelled its own test of an intercontinental missile to “manage escalation,” the Secretary of Defense, Lloyd Austin, testified.

Russia has not yet repositioned its nuclear forces, Burns said, despite sabre-rattling about a heightened state of readiness. Nor is its new missile ready for deployment. But Putin’s reckless war now has a “distinct nuclear dimension”—with lessons that extend far beyond Ukraine and that will endure after the war is over, the Arms Control Association in Washington, D.C., concluded this month. Putin’s invasion “underscores the reality that nuclear weapons don’t prevent major wars,” Daryl Kimball, the organization’s executive director, told me. “U.S. and nato nuclear weapons have proven to be useless in preventing Russian aggression against Ukraine.” The war has imperilled a long-standing premise of deterrence—having a bomb to avoid being bombed. Kimball reflected, “When nuclear deterrence fails, it fails catastrophically.”

The war in Ukraine underscores an even bigger problem. The infrastructure of global security—like the bridges, railways, and power grids that make up our physical infrastructure—is decaying. The challenge ahead is to devise a new or more stable security architecture—with treaties, verification tools, oversight, and enforcement—to replace the eroding models established after the last major war in Europe ended, seventy-seven years ago.

Putin’s invasion has also exposed changes to the global balance of nuclear power. Shortly before his retirement last month, I sat down with Kenneth (Frank) McKenzie, Jr., a four-star general who once wore a key around his neck that unlocked sensitive material necessary for the President to respond to a nuclear crisis. In what feels like a throwback to the Cold War and his early days as a young marine officer, he said, the U.S. is again focussed on nuclear threats from Moscow. Only the capabilities have reversed. During the Cold War, between 1945 and 1989, Washington advanced its nuclear arsenal to counter Moscow’s growing might in conventional arms. In 1954, it tested a weapon a thousand times more powerful than Little Boy, the devastating bomb dropped on Hiroshima. America even produced nuclear land mines. After the Soviets got the bomb, the U.S. still had an eight-to-one advantage in nuclear capabilities during the Cuban missile crisis, in 1962. By the Cold War’s end, the U.S. had developed a “capability and capacity edge, really, over the rest of the world that appeared insurmountable,” McKenzie said.

After the Soviet Union’s collapse, the Pentagon “took a holiday” from studying high-end warfare, the general told me. “We looked away,” he said. The U.S. was drawn into a war in Afghanistan after the 9/11 attacks, in 2001, and then opted to invade Iraq, in 2003. McKenzie was deployed in both wars. The U.S. focussed on conventional conflicts and insurgencies, while Russia, under Putin, built up its nuclear arsenal. Today, U.S. and Russian capabilities have “completely inverted,” McKenzie said. The U.S. has superiority in conventional arms, while Moscow has more nuclear weapons—and more options to deliver them.

The type of nuclear weapons most at issue has also changed. There’s more than one. The U.S. dropped two strategic nuclear bombs on Japan. Strategic weapons are long-range—they travel some three thousand miles—and produce high-yield explosions. They can destroy vast swaths of land and any human within range. Russia currently has just over six thousand strategic warheads; the U.S. has fifty-five hundred. Beginning in the nineteen-seventies, the two countries negotiated several treaties to limit strategic weapons, though all but one have since been scrapped. The New start treaty is the only surviving bilateral pact; it was extended for five years shortly after Biden’s Inauguration, but it seems more tenuous now.

The other type of nuclear weapons are tactical, or nonstrategic, which the U.S. is more worried about today. They are shorter-range—they travel up to three hundred miles—and often have lower-yield warheads. (Some, though, carry more kilotons than the Hiroshima bomb.) They are designed to take out tank or troop formations on a battlefield—not wipe out a city. In the history of nuclear weapons, there has never been a treaty—bilateral or international—that limits developing or deploying tactical nukes anywhere. During the Cold War, the U.S. and the Soviet Union produced thousands each, with Moscow controlling up to twenty-five thousand. Afterward, the U.S. dismantled most of its tactical arsenal and withdrew most of those weapons from Europe. Russia kept more of its stockpile. There is now a vast disparity in tactical arsenals. Last month, the Congressional Research Service reported that Russia has up to two thousand tactical nukes, while the U.S. has around two hundred.

Today, Russia also has many more delivery systems for tactical nuclear weapons—submarine torpedoes, ballistic missiles on land or sea, artillery shells, and aircraft—while the U.S. has only gravity bombs that can be dropped from warplanes. “They have more diverse capabilities than we do,” McKenzie concluded. More than a hundred U.S. tactical nukes are again situated in Europe, at bases in five nato countries: Belgium, Germany, the Netherlands, Italy, and Turkey. Most of Russia’s are on its western front, near the borders of nato members.

Four scenarios may lead Russia to use a nuclear weapon, according to Kimball of the Arms Control Association. To coerce Kyiv or its nato allies to back down, Putin could carry out a “demonstration” bombing in the atmosphere above the Arctic Ocean or the Baltic Sea—not for killing, but “to remind everyone that Russia has nuclear weapons.” Russia could also use tactical weapons to change the military balance on the ground with Ukraine. If the war expands, and nato gets drawn into the fight, Russia could further escalate the conflict with the use of short-range nuclear weapons. “Both U.S. and Russian policy leave open the possibility of using nuclear weapons in response to an extreme non-nuclear threat,” Kimball said. Finally, if Putin believes that the Russian state (or leadership) is at risk, he might use a tactical nuclear weapon to “save Russia from a major military defeat.” Russia has lost some twenty-five per cent of its combat power in the last two months, a Pentagon official estimated this week. Moscow’s military doctrine reserves the right to use nuclear weapons “in response to the use of nuclear and other weapons of mass destruction” against Russia or its allies, and also in response to aggression via conventional weapons “when the very existence of the state is threatened.” In military jargon, the country’s policy is “to escalate to de-escalate,” Richard Burt, the lead negotiator on the original start accord, which was signed by Gorbachev and George H. W. Bush in 1991, told me. “The idea is to so shock the adversary that a nuclear weapon has been used, to demonstrate your resolve that you’re willing to use a nuclear weapon, that you paralyze your adversary.”

The new nuclear reality poses another challenge: how to limit nuclear weapons beyond Russia and the United States. Nine nations now have nuclear capabilities. Putin’s war undermines the Treaty on the Nonproliferation of Nuclear Weapons, the cornerstone of international arms control since 1968. It is the only binding commitment—now signed by almost two hundred states—that seeks to disarm those nations which have the bomb and to prevent others from getting it. The treaty is based on the U.N. Charter, which stipulates that all nations must refrain “from the threat or use of force against the territorial integrity or political independence of any state.”

Since the nineteen-sixties, experts have debated whether Washington and Moscow would use a limited number of tactical nuclear weapons on a conventional battlefield—for example, to destroy a military position or gain a chunk of territory. “The answer is no,” Kimball said. “There is nothing like a limited nuclear war.” At the end of his military career, McKenzie, who spent more than four decades preparing for wars of all kinds, reflected on the nuclear stakes. “We should be rattled right now,” he said. “I am rattled. I’m concerned about where we are.” Three decades after Gorbachev’s speech, the respite now seems illusory.

Robin Wright, a contributing writer and columnist, has written for The New Yorker since 1988. Her first piece on Iran won the National Magazine Award for best reporting. A former correspondent for the Washington Post, CBS News, the Los Angeles Times, and the Sunday Times of London, she has reported from more than a hundred and forty countries. She is also a distinguished fellow at the Woodrow Wilson International Center for Scholars. She has been a fellow at the Brookings Institution and the Carnegie Endowment for International Peace, as well as at Yale, Duke, Dartmouth, and the University of California, Santa Barbara.