Today in Guatemala there are sustained attacks on judicial independence and threats against human rights defenders. But after waiting nearly four decades, the families of the victims of wartime atrocities demand their day in court. 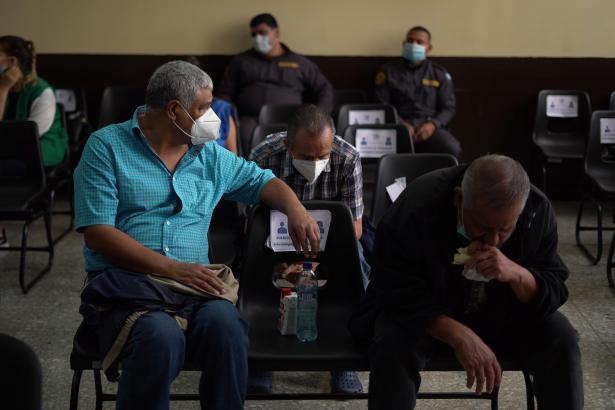 A Guatemalan High-Risk Tribunal held a pre-trial hearing on June 7, 2021 on charges against more than a dozen retired military and police officials for alleged torture, forced disappearance, and murder. ,photo Víctor Peña/El Faro

Marco Antonio González Taracena covers his face, irritated that courtroom photographers want to take his picture. At 79, the retired army general and one-time minister of defense looks frail in his hospital gown and wheelchair. His lawyer says he has cancer.

Prosecutors say that between 1983 and 1985, González Taracena was chief of an intelligence and operational unit of the Presidential General Staff (EMP) known as the Archivo. The mere name Archivo inspires terror among Guatemalans, bringing to mind clandestine intelligence operations against political dissidents who were kidnapped from their homes, their places of work, or the streets, brought to secret detention centers where they were interrogated and tortured, and then either executed or forcibly disappeared.

According to the Commission for Historical Clarification, a U.N.-sponsored truth commission created in the aftermath of Guatemala's 36-year internal armed conflict (1960-1996), 45,000 were forcibly disappeared during the war, mostly at the hands of the army. A total of 200,000 people were killed and another million were forcibly displaced in a country that in 1985 had eight million residents.

The case against González Taracena and more than a dozen other retired military and police officials is based on a military intelligence document known as the Military Diary, or the “Death Squad Dossier.” The document, which was leaked to the National Security Archive and made public in 1999, registers surveillance operations that led to the illegal arrest, torture, extrajudicial execution, and forced disappearance of 195 political dissidents during the de facto government of general Óscar Humberto Mejía Víctores (1983-1986).

Mejía Víctores had come to power in a palace coup against the infamous dictator Efraín Ríos Montt (1982-1983), under whom he served as Minister of Defense. He continued the repressive policies launched under Ríos Montt and previous military governments, now focusing especially on political leaders in Guatemala City and other urban centers.

The document registers the names of 195 dissidents, along with their photographs and other information, including their political affiliation, along with brief details about their fate. In some entries, note indicate that the individuals were killed or disappeared: “se fue” (“he or she is gone”) or “se lo llevó Pancho” (“Pancho took him or her away”). In others, the number “300” appears, a code signifying that the victim was killed, along with the date of their death.

At least 15 of the victims listed in the Military Diary were proven to have been killed, while 131 were forcibly disappeared. To date, only eight have been located and identified, six of them in a single mass grave, with signs of having been tortured and extrajudicially executed, at a military detachment in Chimaltenango. The charges against González Taracena include 14 counts of forced disappearance, three counts of homicide, one attempted homicide, and 21 counts of crimes against humanity.

At the time of his arrest last May, González Taracena was vice president of the Association of Military Veterans of Guatemala (Avemilgua), which was founded in 1995 by powerful retired senior military officials, rankled at the idea of peace accords with a guerrilla movement they considered defeated.

Many of these officials, including González Taracena, have been linked to the Cofradía, or Brotherhood, a network of retired military intelligence officials connected by their wartime actions who used their influence in postwar Guatemala to develop sophisticated structures known as CIACS (illegal clandestine security apparatuses) dedicated to illicit activities such as drug trafficking and money laundering.

Avemilgua wields significant influence in postwar Guatemala. In the immediate postwar years, its members held important positions of power, often behind the scenes, to make sure that the interests of its members —and, especially, their impunity— were guaranteed. The organization lobbied consistently against the International Commission Against Impunity in Guatemala (CICIG), which had made important strides in combating illegal structures and organized crime networks, finally achieving its goal of having CICIG removed from Guatemala permanently in 2019.

When government prosecutors began to aggressively pursue criminal prosecutions against military officials accused of wartime atrocities, Avemilgua went into high gear. During the 2013 genocide trial against Ríos Montt —the first and only time a former head of state has been prosecuted for war crimes in Guatemala— it launched a multifaceted campaign to discredit those involved in the case, from Attorney General Claudia Paz y Paz to the U.S. Ambassador, Arnold Chacón. The smear campaign continued against Chacón’s successor, Todd Robinson, a strong supporter of anti-impunity efforts, and who is now assistant Secretary of State for the bureau of international narcotics and law enforcement affairs.

In 2019, González Taracena took the lead in lobbying Congress to revise current legislation so that officials convicted of human rights crimes would go free and ban similar prosecutions in the future. 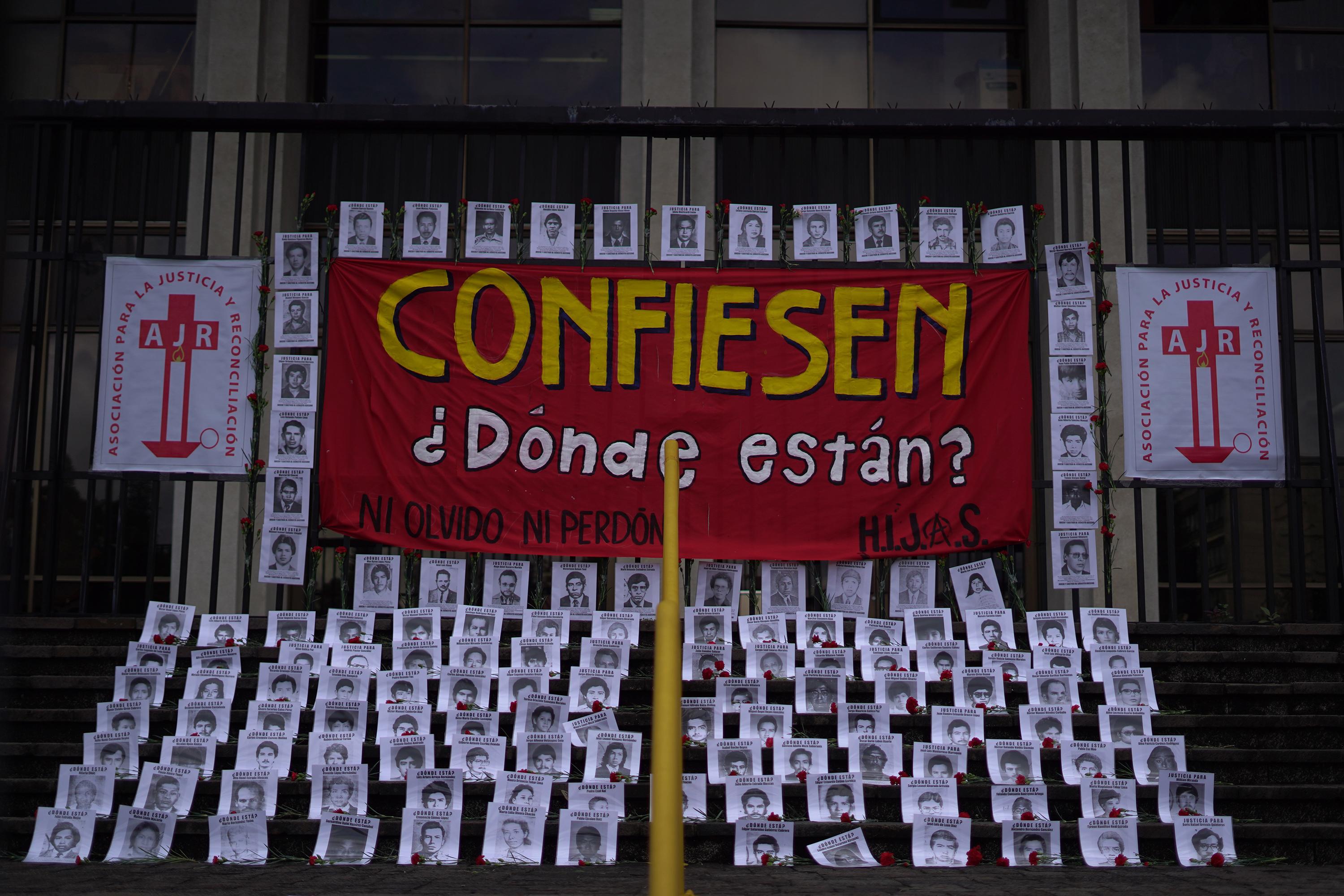 Demonstrators left a tribute to victims outside of the Palace of Justice in Guatemala City on June 7, 2021 during a hearing for the Diario Militar case, also known as the "Death Squad Dossier." Photo: Víctor Peña/El Faro

Today, González Taracena’s fate, along with that of eight other former military and police officials, is in the hands of Judge Miguel Ángel Gálvez of High Risk Court “B.” The pretrial judge in the case, Gálvez is currently reviewing the evidence brought by the plaintiffs to determine whether it is sufficient to send the former officials to trial. The defense sought to remove Gálvez from the case, filing a recusal motion against him last year, but the Supreme Court rejected the request.

It’s no surprise that they wanted Gálvez out. Known for his unflinching independence, Gálvez has ordered some of Guatemala’s most powerful men to trial, including former dictator Efraín Ríos Montt, for genocide, and retired general and former president Otto Pérez Molina for customs fraud.

Gálvez is expected to deliver his ruling in early-to-mid May. Separate evidentiary phase hearings will be held for four other officials; four others wanted in the case remain at large.

Given the near-total impunity in Guatemala at the time the “Death Squad Dossier” became public, the families of the victims brought the case to the Inter-American Court for Human Rights. In 2012, the Court ruled that the Guatemalan State was responsible for the crimes registered in the Military Diary and ordered it to investigate, prosecute, and punish the individuals responsible for the deaths, forced disappearances, and other crimes registered in the document, among other measures.

Though the ruling coincided with the “justice spring” underway in Guatemala under the leadership of Attorney General Claudia Paz y Paz (2010-2014), there were no formal arrests in the case until 2021: On May 27, 11 retired military and police officials were apprehended.

On the first day of the arraignment hearings, retired army colonel Jacobo Esdras Salán Sánchez, one of seven men who had evaded arrest in May, showed up in the courtroom and turned himself in. At 68, Salán Sánchez is a tall, slightly hefty figure. He takes prolific notes during the hearings. With his owl-like glasses and button-down beige cardigan sweater, he could easily be mistaken for a university professor. His wife, a diminutive, unassuming woman, sits next to or near him during the hearings. During recesses, she eats lunch and talks animatedly with him, sometimes sneaking furtive hugs as if they were the only people in the room. His son also attends the hearings, though not as religiously as his wife.

At the time of the crimes registered in the Military Diary, Salán Sánchez was the assistant chief of the special forces (Kaibil) training and special operations course. Prosecutors say that Salán Sánchez coordinated and operated with the counterintelligence unit of the Army Intelligence Directorate (D-2). They also allege that he was one of the torturers.

One of the few to survive the Archivo and live to tell about it is Alvaro René Sosa Ramos. Listed as entry number 87 in the Military Diary, Sosa Ramos managed to escape from his captors, after enduring savage physical and psychological torture, and found refuge in the Belgian Embassy. The ambassador took him to a hospital to be treated for a bullet wound and he later left the country. Sosa Ramos is one of the prosecution’s star witnesses. He not only survived; he has also reportedly identified Salán Sánchez as one of the Kaibiles who captured him and submitted him to excruciating forms of torture.

Like González Taracena, Salán Sánchez is accused of forming part of a clandestine structure that illegally detained, tortured, executed or forcibly disappeared political dissidents. He faces three counts of forced disappearance, one homicide, one attempted homicide, and ten counts of crimes against humanity.

Sálan Sánchez’s name also appears in connection with several of the criminal networks formed by military intelligence officials who became involved in illicit criminal activities in postwar Guatemala. The Washington Office on Latin America reports that Salán Sánchez has been linked to the Moreno organized crime network, the “Salvavidas” group, and the Cofradía. He is reportedly close to retired army general, Luis Francisco Ortega Menaldo, who from 1991 to 1993 was head of the Presidential General Staff (EMP) and who is rumored to be among one of Guatemala’s most powerful men.

According to WOLA, at the insistence of the U.S. government, Salán Sánchez was forced to resign from the army in the late 1990s due to his alleged ties to drug trafficking. Yet, he remained a powerful player, especially after the election of Alfonso Portillo, who ascended to the presidency in 2000 with the Guatemalan Republican Front (FRG), the party of Ríos Montt. Salán Sánchez and Ortega Menaldo were among Portillo’s closest advisors. Years later, in the context of its investigations into a range of illicit networks, the CICIG went after Sálan Sánchez for embezzling 120 million quetzales (US$16 million) from the Ministry of Defense during the Portillo government, resulting in his conviction in 2014. Portillo was extradited to the United States for money laundering and served a year and a half in prison. Ortega Menaldo has never been tried.

Human rights groups have implicated Salán Sánchez in other cases of human rights violations, including the kidnapping and killing of several students from the public San Carlos University in 1989 and the murder of U.S. citizen Michael Devine in 1990.

A week after the arrests in the Military Diary case, members of Valor —the party of Zury Ríos, Efraín Ríos Montt daughter— presented a new bill to Congress that seeks the extinction of all criminal responsibility for any crimes committed during the internal armed conflict. If this bill were to become law, the Military Diary case would be shuttered.

There has been blowback since the May 2021 arrests. It is widely believed that the head of the Human Rights Prosecutor’s Office, Hilda Pineda, was removed and transferred to another unit in response to her investigation of this case. The plaintiffs, prosecutors and the judge in the case reported being followed and receiving intimidating communications during the arraignment proceedings last year.

In the present context of sustained attacks on judicial independence and threats against human rights defenders from the parallel networks that have harbored men like González Taracena and Salán Sánchez, the future of the Military Diary case remains uncertain. But after waiting nearly four decades for their day in court, the families of the victims remain steadfast in their demands for truth and justice.

Jo-Marie Burt teaches at George Mason University and is a Senior Fellow at the Washington Office on Latin America (WOLA). She has written extensively about political violence, human rights and transitional justice in Latin America.

Paulo Estrada investigates wartime human rights violations and is a member of Guatemalan Families of the Detained and Disappeared (FAMDEGUA). Burt and Estrada are founders and co-directors of Verdad y Justicia en Guatemala, which monitors and reports on war crimes prosecutions in Guatemala. They are on Twitter @VerdadJusticiaG.