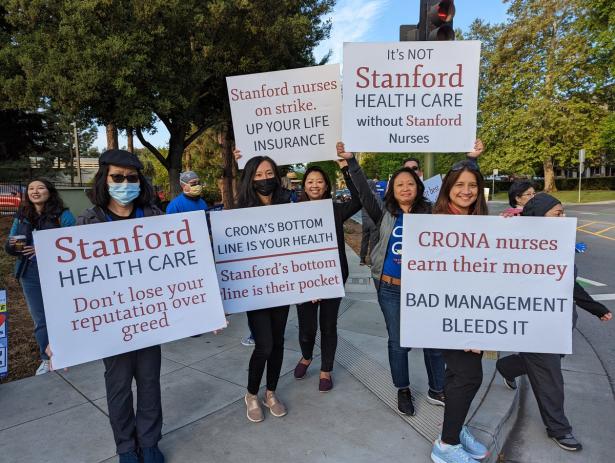 More than 4,000 nurses from Stanford health care are on strike in Palo Alto on Monday.

Nurses from Stanford Hospital went on strike at 6:45 a.m. and nurses from Lucille Packard Children's Hospital in Palo Alto went to the picket line at 7 a.m.

The nurses say they are serious and united as they negotiate with Stanford Hospital and Lucille Packard Children's Hospital for better pay, better staffing and more mental health support.

"We are out here trying to get the hospital to listen to us about getting paid, being willing to make good contract agreements with us that will make nursing more sustainable, and improve our staffing, among other things," said Kathy Stormberg, a registered nurse at Stanford and Crona Vice President.

Crona, or the Committee for Recognition of Nursing Achievement, is the union representing the nurses. They have not been able to come to an agreement on a contract with Stanford.

"I feel like the solidarity of our nurses, the involvement of our nurses...they really understand what is needed and they really want change in the hospitals and the only way to get that is to stand up and fight," said ICU clinical nurse Kimberley Reed.

Reed has worked at Stanford for 18 years and says she has seen a shift over the years.

Nurses say that some of the issues predate the pandemic but now that pandemic restrictions have eased up, they've been overwhelmed with patients who are coming in for medical care that they had put off earlier in the pandemic.

A spokesperson for Stanford says they care about their nurses and believe their offer reflects that.

"We are very pleased with the package we provided. We are paying top-of-the-market wages for our nursing staff and we are happy to do so. We are not understanding why we are in a labor dispute," said Stanford Chief Nurse Executive Dale Beatty.

But the union president says Stanford can do more to keep nurses.

"If you put effort into your nurses and you agree to things that will bring nurses here, you will attract every nurse that is available because they will want to work here," said Stanford nurse and Crona President Colleen Borges.

Stanford officials say they brought in replacement nurses to cover the shifts of the nurses on strike but some patients will have to postpone their care for now.

"We have had some elective surgery canceled just to make sure all our patients have the resources that they need," said Beatty.

Borges said the last offer the union received from Stanford was a 5.4% raise. She says the union countered Sunday and asked for 7.76% raise. The two sides are scheduled to meet at the negotiating table again on Tuesday morning.

"Our sincere hope is that an agreement can be reached promptly so that nurses don't lose additional pay, don't risk losing the subsidy for employer-paid health benefits and can return to patient care."

"Today I'm proud to stand with thousands of nurses in their righteous fight for better and safer working conditions to protect both themselves and the patients they serve. I encourage everyone to listen to the needs of these frontline heroes who led us through the pandemic and call on Stanford to invest in their nursing staff that are suffering from extreme exhaustion and burnout. We know that our nurses are underpaid and under-appreciated. And that is exactly why I'm authoring Senate Bill 213 in the California Senate to make it easier for registered nurses and other health care workers to access the workers' compensation system, in line with those protections afforded to other frontline professions. Please know that we stand together with you, by your side, calling for better pay, staffing conditions, and a healthier work environment."