Can Sanctions Ever Be Just — Let Alone Effective?

History suggests the West's sanctions on Russia will only hurt vulnerable people. Movements offer a better approach to economic penalties. 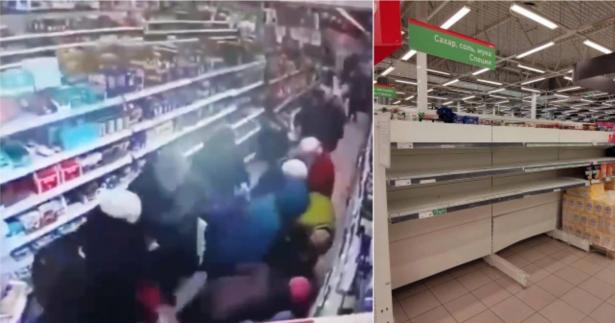 As a result of its brutal invasion of Ukraine, Russia is now the most sanctioned country in the world, leading one former Obama administration Treasury official to describe the situation as “financial nuclear war.” Western European countries, however, depend on Russian oil and gas, so they have had to carve out an exception in order to purchase fuel from Russia, thus allowing Russia to gain substantial export revenue to sustain its military. It is possible, then, that Russian citizens will suffer more from deprivation due to the economic sanctions than will the government coffers.

Because the world cannot risk actual nuclear war by engaging Russia militarily, Western Europe and the U.S. have been constrained to giving weapons and training to Ukraine. Consequently, in the eyes of security and economic analysts, this conflict is testing “whether economic retaliation can make an aggressor back down or whether only armed force can stop armed force.”

Economic sanctions are penalties levied against a country, its officials or private citizens, in an effort to provide disincentives for the targeted policies and actions and to force it to obey a law or public policy. The widespread economic sanctions against the apartheid government of South Africa in the 1980s, including boycotts and divestment, is exemplary of the potential of sanctions to achieve a more just and free society, without resorting to violence. Many other sanction regimes are not.

In 1990, the United Nations imposed sanctions that banned world trade with Iraq after that country’s invasion of Kuwait. The sanctions continued after the Gulf War in 1991 because of Saddam Hussein’s refusal to comply with the terms of the ceasefire. By 1997 one-third of Iraqi children were malnourished, and by 1999 the economy was shattered. Former U.N. official Denis Halliday called the sanctions “genocidal” and quit his post to speak out against them. Thirteen years of U.N. sanctions contributed to a serious reduction in Iraq’s per capita income, but dictators like Hussein generally ignore sanctions — and thus ensued a slow economic war that impoverished the civilian population. As one study noted, this resulted in the U.N. Security Council invoking more targeted, rather than comprehensive, sanctions.

In principle, sanctions are invoked to stem terrorism, narcotics trafficking, human rights violations, weapons proliferation and violations of international treaties. They have ranged from comprehensive economic and trade sanctions to more targeted measures such as arms embargoes, travel bans, boycotts, divestment and financial or commodity restrictions. Since 1966, the U.N. Security Council has established 30 sanctions regimes in many African countries, the former Yugoslavia, Haiti, Iraq, Lebanon, as well as against ISIS, Al-Qaida and the Taliban.

Notably the U.N.-sanctioned countries have not included powerful Western countries, though many have been involved in criminal war — including the U.S. war in Vietnam, the 20-year U.S./NATO war in Afghanistan and the U.S. war in Iraq, which included a handful of other European countries.

The Brookings Institute has noted that the United States uses sanctions increasingly “to promote the full range of American policy.” This somewhat neutral statement acknowledges that the U.S. commonly employs sanctions for geopolitical purposes — that is, to amass military or economic power against a rival and to promote regime change. Cuba is among the most notable failures of regime change. Six decades of a U.S. trade and travel embargo on Cuba accomplished none of Washington’s policy objectives: the overthrow of the Communist government, promotion of capitalism and stopping foreign investment by other countries. Currently, in the U.N. General Assembly, only the United States and Israel support the sanctions against Cuba. Moreover, studies have found that the longer sanctions last, the less likely they are to succeed.

One of the most comprehensive studies of 170 cases spanning a century of economic sanctions “concluded that sanctions were partially successful only 34 percent of the time.”

Many studies conclude that sanctions are more effective against states with coherent structures of power and social cohesion — while being much less effectively used against dictatorships and failed states. However, that has not been the case with three of the longest sanctioned functioning countries with varying degrees of one-party rule in the cases of Cuba and North Korea and a combination of strong theocracy and weaker democracy in Iran. Note that in each of these countries the United States has historically had an oversized imperialist role: the Spanish-American War in the case of Cuba, the Korean War to contain Communism and the CIA-planned coup in Iran against the left-leaning, democratically-elected Prime Minister Mohammad Mosaddegh.

After withdrawing from its devastating and futile 20-year war in Afghanistan in August 2021, the U.S. quickly enacted economic sanctions against the brutal Taliban government, while also withholding Afghan people’s money deposited in the New York Federal Reserve Bank. According to Mark Weisbrot of Just Foreign Policy, these punitive sanctions, inevitably being borne by the Afghan people, “are on track to take the lives of more civilians in the coming year than have been killed by 20 years of warfare.”