It may be that the vision about the role of popular movements of the latter Berlinguer was too far ahead of its time, but it is still proving to be the only viable alternative to the disasters of the present. 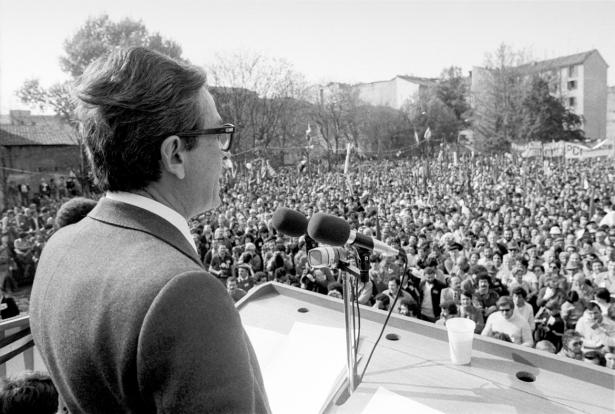 The war in the center of Europe, with the brutal Russian aggression against Ukraine, outside of all international law, whatever the declared reasons for justifying it, marked the beginning of this year in which we were preparing to commemorate the centenary of the birth of Enrico Berlinguer, not only for emotional reasons, but to reflect on his thought and the century that has passed. (…)

How is it possible that war has returned to Europe once again, which hasn’t happened since Belgrade was bombed by NATO to wrest Kosovo from Serbia? And why are the wars that were (apparently) more or less concluded still continuing in the Middle and Near East, or in Libya, just a few kilometers from the Sicilian coast? Where is the nationalism that is spreading throughout the world coming from? Why has the trend that has been called “populism” spread so much? And how is it possible that after the catastrophes generated by Fascism and Nazism, these ideas have come back to proselytize and build organizations? What will this new nightmare of the ongoing Russo-Ukrainian war lead to? (…)

After Stalinism, after Khrushchev, after Brezhnevism and after the war started and lost by the Soviets in Afghanistan, there came the hope of a radical democratic reform of the Soviet system with Gorbachev, but the economically and politically victorious power, the United States, wanted to suppress that hope, favoring the large-scale private theft of the bureaucrats, and thus promoting and safeguarding the power of one of its own clients, Yeltsin, who came to power by bombing the freely elected parliament. The U.S. underestimated the inevitable resurgence of nationalism in Russia after it was converted to the most ruthless form of capitalism and humiliated beyond measure.

In Italy, Berlinguer’s original vision of the need for, and ideal of, social liberation – a vision fought against by the Soviets and the parties tied to them, which took the name of “Eurocommunism” and then became the possible prospect of a new left – was tacitly buried with him after his early death by most of his comrades, who deemed it necessary to disband their own party. The party was called “Communist,” like many others across the world, but it was not comparable to its other namesakes; nonetheless, it disappeared, like many others and like the Soviet Union itself. On that count, Berlinguer was called a loser, a failure, or, in the best of cases, a dreamer of delusions.

Berlinguer lived for 40 years as an early leader and then head of the party he had chosen to support. And just as he had embraced as a young man the ideas of social and human liberation, against the social class to which he belonged by birth, believing that they were embodied in the Soviet Union, which had made a decisive contribution to the defeat of the Nazis and Fascists, in the same way he acknowledged the hollowing out of these ideas at the hands of the Soviet leadership, who should have been inspired to reform the beast they had inherited, starting from a history of heroism and unprecedented sacrifices made together but leading to unthinkable atrocities as later denounced by one of their own, Khrushchev.

However – and this was the real break within his party, well before 1989 – there were opposing ideas about the meaning of the increasingly evident failure of the Soviet experiment, and thus the end, proclaimed by Berlinguer himself, of the “propulsive thrust” of the attempts made to spread that experiment after the October Revolution. As we saw later, the majority of the leadership of the PCI had reached the conclusion that it was necessary to unreservedly acknowledge how things were and thus make a radical break with its past.

In opposition to those wanting to liquidate the whole project, Berlinguer quoted Mitterrand (“to cut off one’s own roots thinking one will flourish better can only be the act of an idiot”), arguing that they could not and should not give up on their own original and substantial reasoning. At the roots of the movement of socialist inspiration lies the criticism of the capitalist model: to renounce it means to renounce one’s own mission. But at the same time, he thought of another way to interpret that critical function. First of all, with the renewal of the fundamental contents of the model, given the wear and tear and the collapse of much of the old structure. Hence his new ideas about pacifism, feminism, environmentalism and the ethical motivations of political engagement.

Reorienting the ultimate goal towards a society aimed at realizing the “freedom of each and all” seemed like the work of a countercurrent, which was not only improbable but unrealistic and on the losing side. (…) But the victory of capital in the class struggle (as proclaimed accurately by the super-billionaire Warren Buffet) could not suppress the economic and social contradictions constitutive of the system – with the known consequences of the environmental disaster, part of which is the pandemic, and the exacerbation of frightening levels of inequality.

The globalization of the capital market was, according to its own nature, in pursuit of maximum profit. While it benefited countries with low labor prices and enriched financiers beyond belief, it penalized workers in rich countries, who were abandoned by the left, which had turned into administrators of the system and experts, in Italy and elsewhere – with cuts to the welfare state, the greatest creation of the twentieth-century socialist movement (including the PCI). As a consequence, there was a rebirth of nationalism (in the United States and in many other countries around the world) and the rise of populism, within which there was a resurgence of fascist impulses and arguments.

The stupidity of the “winners” of these trends only aggravated the condition of insecurity in welfare societies and in international relations. They were all convinced, in conscious imitation of the Roman Empire, of the determining power of military force – together with the monopoly on information – for the exercise of domination, and were unable to conceive of a hegemony shared with others. Hence the tacit intolerance towards the process of European integration (all the way to support for Brexit) and the humiliation of Russia, defeated in the Cold War.

The human world now appears to be a very unsavory place, torn between raging war and the climate crisis, between the resurgence of nationalism and the dangers of authoritarian backsliding, between the rise of the violent and the spread of violence – including the most cowardly form of violence, that committed against women. However, this does not lead us to a sterile nostalgia for the past: the Cold War was not a time to be held up as an example. But it does lead us to understand that the current state of affairs is the result of bad politics, of a wrong interpretation of that victory.

Hope is not dead. I don’t remember any youth mobilizations as vast as those against the environmental disaster, echoed in Italy by new and powerful student mobilizations. The new feminism, which seemed an elite phenomenon and appeared on the decline, is seeing an unprecedented spread. The movement for peace in the world has more reasons than ever to come back, and do so in force.

It may be that the vision of the latter Berlinguer was too far ahead of its time, but it is still proving to be the only viable alternative to the disasters of the present.