A new bill tries to claw back authority given to the executive branch on debt cancellation. 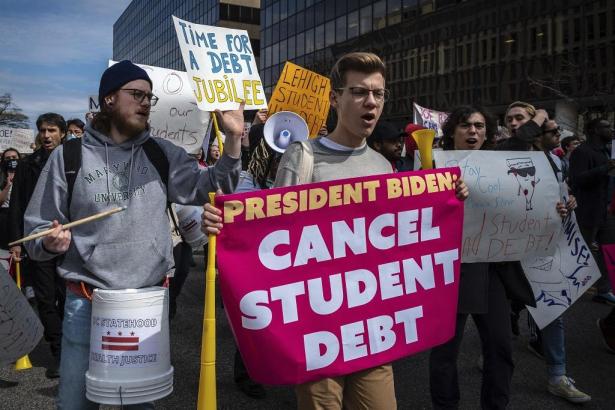 March against student debt around the U.S. Department of Education in Washington on April 4, 2022. Members of the Debt Collective, which describes itself as a borrowers’ union, called for Biden to abolish all student loan debt by executive order.,Alejandro Alvarez/SIPA USA Via AP Images

Five Senate Republicans confirmed that President Biden has the authority to suspend, defer, or cancel student debt, when they filed a bill on Wednesday to block Biden from carrying that out.

The bill, known as the Stop Reckless Student Loan Actions Act of 2022, would make direct changes to one of the statutes Biden can use for the purposes of debt cancellation or deferral. It also states that the executive branch may not “suspend or defer” student loan payments for longer than 90 days or for individuals who make more than 400 percent of the poverty line. The executive branch, under the bill, also may not “cancel the outstanding balances,” whether as part of a declared emergency or “through any type of executive or regulatory action.”

There would be no need for such a bill if there was not already authority granted by Congress to the executive branch to suspend, defer, or cancel student loan payments. The bill represents an effort to claw that authority back, or at the very least clarify the statute to remove all doubt.

Prior to this point, the question of whether President Biden had the authority to cancel student debt was contested, with Republicans generally disagreeing that Congress granted that ability to the executive. A rushed legal analysis published by a political appointee in Donald Trump’s Education Department a week before the end of his presidency suggested that debt cancellation was not legal, citing decisions written almost entirely by the late Justice Antonin Scalia. The Biden administration did their own legal analysis on the viability of debt cancellation last year, but the entirety of that memo has not been released to the public.

But the Senate Republican bill, authored by Rep. John Thune (R-SD), a member of the GOP leadership, settles the question of whether current law provides a path to cancel the debt. Clearly Senate Republicans are worried enough that it does to issue their own legislation repealing that authority.

The conservatives’ fear was heightened by a recent private discussion Biden held with the Congressional Hispanic Caucus, where, according to published reports, the president said he was looking at options to cancel some undisclosed portion of student debt for the 43 million borrowers with federal student loans. There are indications that the relief would be means-tested in some fashion, but nothing has been announced.

The reports have caused conservative politicians, candidates, writers, and influencers to lose their minds, in ways that suggested real concern that Democrats actually might establish a policy that helps people. The GOP senators issued their bill the day after the reports circulated.

In addition to settling the legal question, the bill also provides a window into how the Biden administration might cancel student debt and what authorities it might use, according to Luke Herrine, a Ph.D. candidate in law at Yale University who wrote some of the early scholarship about student debt cancellation.

The bill begins by finding that the executive branch has “abused” authority provided under the HEROES Act of 2003, an amendment to the Higher Education Act intended to help military service members, to pause student loan payments for more than two years. This is actually a criticism primarily of the Trump administration, which used the HEROES Act to justify its enactment of a payment moratorium.

The HEROES Act contains language giving the secretary of education the ability to “waive or modify any statutory or regulatory provision” involving federal student loans to ensure that those borrowers adversely affected by a declared national emergency “are not placed in a worse position financially.” That’s what Trump employed to stop student loan payments amid the COVID-19 emergency. This has been extended several times, and the most recent extension lasts until August 31.

But the Higher Education Act itself also includes something called “compromise and settlement” authority, which gives the secretary the power to release debt claims or settle for less than the full amount.

There are indications that the Biden administration will opt to use HEROES Act authority for debt cancellation, finding it a cleaner and more legally bulletproof line of reasoning. Clearly, Senate Republicans received that intel, as they focus much of their bill on the HEROES Act.

The bill amends the HEROES Act to limit any executive branch suspension of student debt payments to 90 days in the case of a declared emergency. It also limits that suspension or deferral to individuals with earnings lower than 400 percent of the federal poverty line. Finally, it states that any suspension or deferral would be deemed a major rule subject to the Congressional Review Act, a law that allows Congress to nullify executive branch rules by a majority vote (albeit subject to veto by the president). And it states that any COVID-related suspension of student loan payments “shall terminate” upon enactment of the bill.

The Republicans know that a Democratic-majority Congress won’t pass their bill. Nonetheless, the bill provides an oppositional talking point for the party if Biden does cancel student debt. Therefore, it’s guessing at how that debt relief will be structured. However, the Republicans cover their bases by also reserving the right to nullify cancellation “through any type of executive or regulatory action,” which would cover the compromise and settlement authority in the Higher Education Act.

Using the HEROES Act works much better for the existing suspension than for cancellation, Herrine noted. But the administration could also opt to use compromise and settlement authority, justifying its decision by citing the national emergency. Accordingly, Senate Republicans attack both options in their bill.

Debt cancellation has been a significant conversation in progressive circles since well before Biden’s presidency. In the course of his campaign, Biden stated his support for canceling at least $10,000 per student borrower, but has usually added that it should be done through an act of Congress. However, Biden’s discussions with the Congressional Hispanic Caucus moved in the direction of using executive action. It’s likely that something will be done before the payment pause expires at the end of August.

Even with this acknowledgment that presidents can cancel student debt, Republicans would be likely to sue anyway. However, a recent Virginia Law Review article makes the case that “it is likely that no party would have standing to challenge the executive action.”

Used with permission. © The American Prospect, Prospect.org, 2022. All rights reserved.

David Dayen is the executive editor of The American Prospect. He is the author of Monopolized: Life in the Age of Corporate Power (2020) and Chain of Title: How Three Ordinary Americans Uncovered Wall Street’s Great Foreclosure Fraud (2016), which earned the Studs and Ida Terkel Prize. He was the winner of the 2021 Hillman Prize for excellence in magazine journalism. Follow @ddayen