Regardless of the outcome in Ukraine—a Russian occupation of the eastern regions, an unending insurgency, or a Ukrainian victory—the European security order will continue along an East-West divide. 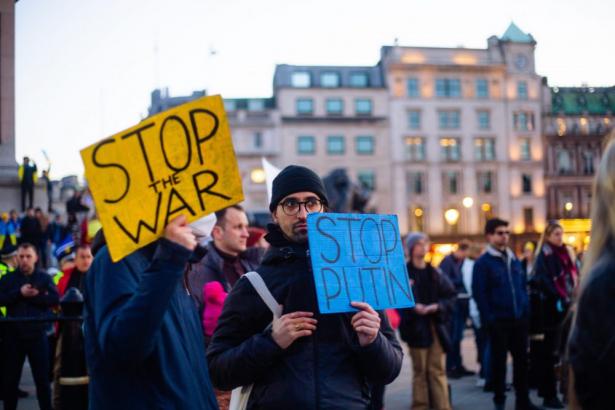 From Cold War to Cold War

A principal lesson of the war in Ukraine is that the Cold War never ended. German reunification, the Soviet Union’s collapse, new entries in NATO, democratic springs in Poland and Hungary, Ukraine’s independence, the removal of nuclear weapons from eastern Europe, including Ukraine—all these events once augured a new era in Europe. Russia would embrace perestroika and glasnost, globalization would fully integrate the eastern European economies with the European Union, and demilitarization would free up funds for social well-being and environmental rehabilitation. American triumphalism was at its height, with President George H.W. Bush proclaiming a “new world order” after the Iraq intervention, and Frances Fukuyama prophesying “the end of history.”

Those dreams were shattered by subsequent events in the Middle East, the rise of China, and, in Europe, developments both unforeseen—such as large-scale immigration from the Middle East and north Africa, and the resurfacing of Russian authoritarianism—and unwise, such as the unequal impact of globalization on working classes and NATO’s eastward expansion.

These new sources of European division provided fertile ground for the rise of right-wing populism and white supremacist nationalism. The 1990s proved to be a transitional period, not the start of a new era. We’re now in Cold War 1.5, not Cold War II.

Regardless of the outcome in Ukraine—a Russian occupation of the eastern regions, an unending insurgency, or a Ukrainian victory—the European security order will continue along an East-West divide. As Stephen Kotkin Puts It, geoeconomics has not replaced geopolitics.

Vladimir Putin is trying to create his own new order by force—an order in which a Russian-dominated east faces a US-NATO-dominated west. Neutrality has become a thing of the past as Sweden and Finland seem ready to join NATO, Germany has broken with tradition on military aid in a conflict, and even Switzerland has contributed to Ukraine’s defense against Russia’s invasion. It’s us-versus-them again.

A central principle of post-World War II international politics was that aggression must not pay. That principle has been under fairly consistent assault since, but never so profoundly as it is today. European Commission President Ursula von der Leyen said in a statement that the Russian invasion “Is not only a defining moment for our continent, but also for our relationship with the rest of the world.”

She specifically meant to include China. General Mark Milley, the US joint chiefs chairman, tells CNN:

“What’s at stake . . . is the global international security order that was put in place in 1945. . . . And underlining that entire concept is the idea that large nations will not conduct military aggression against smaller nations, and that is exactly what’s happened here, by Russia against a smaller nation.”

Therein lies the importance of how the war in Ukraine ends.

One possibility is that Putin will not survive, a return of some semblance of democracy in Russia is possible, and the threat to democratic and semi-democratic states bordering Russia will subside.

Human rights and pro-democracy forces in currently pro-Russian authoritarian regimes such as Belarus, Hungary, and Kazakhstan may bring on a new wave of color revolutions. Europe would essentially be back to 1989-1991 and the post-Soviet upheaval, though with the ever-present danger of Russian revanchism. It would be an uneasy peace, however, with parallels to Europe in 1945 when another great power was defeated, the Americans went home, and Europe quickly faced political and economic upheaval.

In Asia, China’s close ties with Putin’s Russia would have been proven bankrupt, forcing China to reconsider its global strategy and giving the Chinese military good reason to shy away from reliance on a Russian army that has proven Grossly Incompetent.

US alliances in Asia—with South Korea, Japan, Australia, and with India in AUKUS and the Quad—would all be given a boost. China, would charge all those countries with seeking to contain it, and would likely invest more heavily in its naval and air forces. That could spell trouble in the Taiwan Strait and, with North Korea, on the Korean peninsula. The nuclear issue could then become more salient—with South Korea wanting its own nuclear deterrent against North Korea and Japan not just expanding its military but considering having a nuclear deterrent against China. A new Cold War in Asia, already much discussed these days, might be unavoidable.

If, on the other hand, Putin emerges with new territorial gains in Ukraine, unpunished for his war crimes and determined to refurbish his military’s damaged reputation, the battle lines for the next confrontation in Europe will be apparent.

A new Iron Curtain is likely to descend on Europe: Georgia, Moldova, and possibly Poland may face serious security threats from Moscow even though Russia’s economy has been seriously weakened, the Russian military had gotten a black eye in Ukraine, and the quality of life for Russians will have been dramatically scaled back. The US-NATO alliance system will have to be fortified for another long haul.

That scenario may not bode well for the alliance. Long-term economic sacrifice could cause some EU populations to drift from generosity with Ukraine to indifference. Central Asia’s security picture may become more dire as well. Countries that are dependent on Russia for security and trade, such as Kazakhstan, or host Russian military forces, such as Kyrgyzstan and Tajikistan, may worry about where Russian Hyper-Nationalism will move next.

The immediate future of Europe may feature prolonged fighting in Ukraine without any clear outcome. That eventuality means further increases in military spending and armed forces throughout Europe, deeper political divisions within countries, and the dashing of hopes for combatting climate change and other social problems.

Talk of a nuclear confrontation will grow more ominous, not just in Europe but in East Asia too. Above all, think of what Ukraine, in victory or defeat, will be like. It already is a completely devastated country, with a huge refugee population, splintered families, industry reduced to primitive levels, and severe food, water, and electrical shortages. Ukraine, in short, will be a basket case after the war, dependent on the West for many years and constantly facing threats from the east. Like Western Europe after the Nazi defeat, Ukraine and possibly its neighbors will need a Marshall Plan and security guarantees. Where will the money and the guarantees come from?

Cold War I was enormously costly to all countries and to the planet. With pandemics and the climate crisis now ongoing threats to species survival, the last thing the world needs is a new round of Cold War that not only detracts attention from those existential threats but adds a New One: use of a nuclear weapon.

Ukraine must be rebuilt and European security must be reinforced, but there should be less talk about a “new order” and Cold War, and more talk about human and environmental security.

Mel Gurtov, syndicated by PeaceVoice, is Professor Emeritus of Political Science at Portland State University and blogs at In The Human Interest.