Most Price Increases From Inflation Have Gone to Corporate Profits

The inflation panic is causing some Democrats to pivot from social spending to deficit reduction. That’s exactly the wrong approach.

May 5, 2022 Max B. Sawicky In These Times
Printer friendly
Most Price Increases From Inflation Have Gone to Corporate Profits Published May 5, 2022 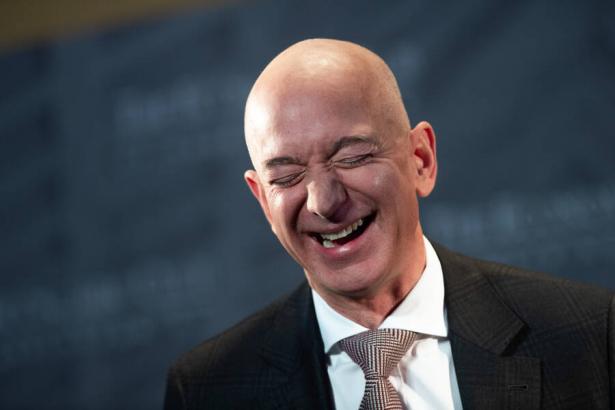 Jeff Bezos, the second richest man in the world, got $81 billion richer during the pandemic., Photo By Saul Loeb/AFP // In These Times

When the history of the 2020s is written, the current inflation panic could very well rival the ​“but her emails” canard surrounding Hillary Clinton in 2016: The impacts on U.S. politics have been profound, and decidedly negative from any progressive standpoint.

I have to admit that I previously understated the persistence of the price increases that started showing up last fall. As Yogi Berra is credited with saying, ​“Prediction is hard, especially about the future.” Still, the fact remains that the most popular explanations for inflation reflect malign political-economic motivations.

First and foremost, we hear that inflation is due to excessive economic stimulus, especially from the eternal enemies of economic stimulus. Hence the outsized political role of Sen. Joe Manchin (D‑W.V.) — the self-styled economic genius who constantly worries about inflation — and the endless nattering of budget hawks. According to this outlook, the federal government (under Trump as well as Biden) gave people too much money, and, as everybody knows, inflation is the result of ​“too many dollars chasing too few goods.” As usual, what ​“everybody knows” serves as an inadequate guide.

The dollars chasing goods are reflected in what economists call consumption expenditures. If there are too many dollars, so to speak, then consumption spending would outrun the normal growth of GDP. As economist Dean Baker notes, this has not been the case during the ongoing panic, either in the United States nor in the nations of the European Union, where inflation has been similarly elevated.

Another pandemic effect cited by Baker is the shift within consumer spending from services to goods: less travel and eating out, more staycations and ordering in. Here again, goods producers can adjust, but that takes some time.

This takes us from the demand side — consumer spending — to the supply side. Here the problems are obvious. The pandemic disrupted ​“supply chains,” i.e. the transactions among firms within industries.

As Josh Bivens of the Economic Policy Institute notes, if one producer is temporarily sidelined, or otherwise forced to cut back production, this provides opportunities for competitors that are not as hampered to jump in with price increases. This dynamic is not a matter of the long-running growth of monopolies, in tech or elsewhere, but a case of temporary market disruptions. Pandemic lockdowns in China — the world’s manufacturing colossus — have been significant, resulting in downstream impacts.

The bottom line, as Bivens shows, is that profits have increased rapidly, while labor costs have not. The profit increase reflects the ability of firms to exploit kinks in the supply chain. Most of these price increases have gone to profits, not to labor.

As Bivens writes, ​“The historically high profit margins in the economic recovery from the pandemic sit very uneasily with explanations of recent inflation based purely on macroeconomic overheating.”

One of the functional aspects of capitalism is that such wrinkles tend to work themselves out. If somebody is making unusual profits in a particular niche, others move in to share the bounty and, in time, profits and prices settle back down.

But on top of the pandemic, we also have the war in Ukraine.

The EU is still buying gas from Russia, but uncertainty over oil and gas production has caused spikes in the world price, which has ended up at gas pumps in the United States. In trying to shift oil and gas buying away from Russian sources, our oil-producing ​“allies” such as Saudi Arabia have been singularly unhelpful.

The other leading supply problem is the curtailment of Ukraine’s grain production, which raises food prices worldwide. Of course, the United States produces most of its own energy and grain, but a rise in world prices allows our domestic producers to take the same ride.

All this takes more time to explain than sensationalist stories about gas prices. No technical story can stand up to heart-breaking tales of families of modest financial means faced with higher rents and higher prices for fuel and basic foodstuffs. There is clearly need for more social spending to help those being hit the hardest by such price increases.

Bivens suggests an excess profits tax as one remedy. Another would be increased benefits in programs such as the Supplemental Nutrition Assistance Program (a.k.a. ​‘food stamps’) and unemployment insurance to alleviate inflation effects on lower income families. The federal government could also do something about the high prices of prescription drugs. The impact on overall inflation itself for these remedies is dubious, but it would help if the Democrats showed they were doing something. The most important likely remedy is time, but in politics those who stand back and wait are in for a shellacking.

Otherwise, the U.S. economy has been doing quite well. The miraculous recovery of 2021 puts employment close to the pre-pandemic level in February 2020, after a steep drop of 16 percentage points. Wage growth for lower-income workers, especially people of color, has exceeded growth in prices. Where are the stories of those workers?

There is a media problem and a messaging problem. In general, the media paints a dismal and unbalanced picture of the economy, and the Democratic Party fails to sort out what it has accomplished, what is beyond its control, and what policies are appropriate.

On the policy front, we have two problems. One is a further indication of misfeasance from the Biden administration, in the form of new blather about the success of deficit reduction. It’s one thing to be blocked from worthwhile reforms like Build Back Better by a couple of intransigent Democratic senators. It’s another to celebrate the results.

This is very much a replay of the Obama 2010 playbook, when his administration failed to cobble together a congressional majority to support its initiatives, failed to note the shortcomings of what had been enacted, and failed to talk about what should have been done instead. Then, in the 2010 midterms, the Democrats, as Obama said, got ​“shellacked” and lost their majorities in Congress.

Bringing employment back to nearly its pre-pandemic level in a year’s time was a great achievement, but we can do better. Employment should keep up with population growth — and that means 2022 population, not 2020 population.

The other policy issue is the posture of the Federal Reserve, using the hammer it has while defining everything as a nail. By pushing up interest rates in pursuit of inflation reduction, the Fed will end up pushing down employment and GDP growth, while possibly worsening supply-chain difficulties.

This past Thursday, the Commerce Department announced that GDP in the first quarter of this year had declined by 1.4 percent on an annual basis. It’s not news that the stock market has also taken a dive this year, especially this past month, which further retards consumer spending. People feel, and are, less rich — and they spend less as a result.

Even the European Central Bank has pointed out the gap between the incoming Fed bombardment and the problem it is held to address:

“Higher interest rates won’t solve the imbalance between supply and demand, energy prices and base effects that are currently pushing up prices: they won’t make more shipping containers available or boost the supplies of semiconductors and fuel.”

The pandemic relief has been a huge success. Supply-chain disruptions cannot be attributed to the White House, nor repaired by the Fed’s jack-up of interest rates. The economy’s inflation problem is being misdiagnosed and mistreated. All this adds up to a terrible political situation in the run-up to the midterm elections that puts our entire democracy at risk.

[Max B. Sawicky is a senior research fellow at the Center for Economic and Policy Research. He has worked at the Economic Policy Institute and the Government Accountability Office, and has written for numerous progressive outlets.]