Strikes, once common, are rare today. We asked readers to share their strike stories. 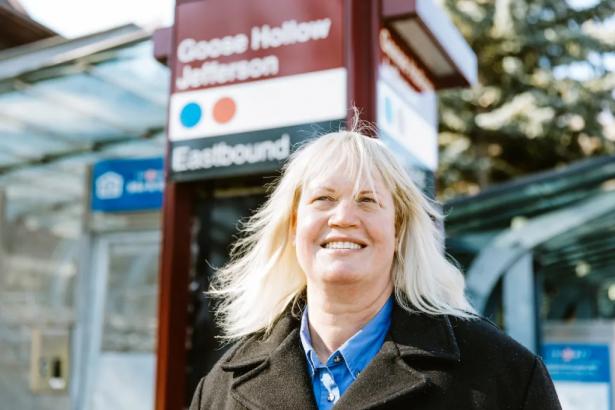 “Public support was profound and amazing,” said Vanessa Krinker, looking back on the 1997 UPS strike., Photo by Cheryl Juetten

Today Vanessa Krinker, 49, drives the number 45 bus to and from Garden Home in Southwest Portland. She wears a TriMet uniform and is a proud member of Amalgamated Transit Union Local 757. But in 1997 she was active with Teamsters Local 63 in Southern California, and took part in one of the greatest strikes of the modern era.

Krinker was a part-timer at a small UPS hub in Victorville, California, in the Mojave Desert an hour northeast of LA. She’d grown up nearby and had been at UPS two years. Her job was to load and unload trucks. It was hard work. Part-timers’ wages had been frozen at $8 an hour for 14 years.

But under new leadership, Teamsters prepared for a fight with UPS, holding rallies and circulating a petition signed by over 100,000 members. Krinker was active in the union, and handed out leaflets to coworkers on break.

“At UPS meetings, I would blurt out, ‘Start saving your money! Get ready to go on strike.”

In bargaining, the union demanded raises and an end to outsourcing and systematic reliance on part-time workers. Highly profitable UPS demanded concessions, including allowing it to withdraw from the Teamsters pensions.

On Aug. 4, 1987, an estimated 185,000 UPS workers walked off the job. It was the first ever nationwide strike at UPS. UPS was a round the clock operation. Now it stopped dead.

“We got the public on our side,” Krinker recalls, “and we stuck together.” At her hub, only one worker crossed the picket line. UPS pilots honored picket lines and refused to fly the planes. Other unions visited the picket line to show support, including nurses and machinists. After conferring with other unions, the AFL-CIO pledged unlimited financial aid for the strike fund.

The strike lasted 15 days.UPS lost over $600 million (over $1 billion in today’s dollars.) To settle, UPS agreed to restrict subcontracting, turn 20,000 part-time positions into 10,000 full-time positions, and stay in the pension. “I have the satisfaction that later in life I’ll be able to draw a Teamster pension,” Krinker says. That’s thanks to the strike.

Wayne Luckinbill, 69, is retired after years driving a bus for Rogue Valley as a member of Amalgamated Transit Union Local 757.

But in 1983, age 30, he drove a forklift, worked saws, and operated tractors at a Louisiana-Pacific fiberboard mill in Oroville, California.

That is, until L-P CEO Harry Merlo blazed a trail of corporate villainy. Up until 1983, Louisiana-Pacific had bargained together with Weyerhaeuser, Boise Cascade, and Champion, setting terms for the entire industry. But Merlo decided L-P would bargain separately, and demand a wage cut of two dollars an hour, Luckinbill recalls.

In June 1983, about 1,500 workers walked off the job at 18 Louisiana-Pacific mills in five West Coast states, including about 70 members of the Lumber, Production and Industrial Workers union at the mill in Oroville. Luckinbill was a picket captain.

“We figured once we struck, we were sending a message to the company that we were serious about maintaining our wage,” Luckinbill says. “There was a lot of enthusiasm in the beginning, a lot of solidarity.”

But the company went to court claiming strikers were obstructing the flow of trucks, and a judge issued a court injunction limiting the number of picketers — to two per entrance. That hurt the morale of the strikers.Trucks would assemble five miles away and come in as a convoy of 10 or 15 vehicles.

Three or four strikers crossed the picket line to return to their jobs.

The union leadership tried to reopen negotiations, offering to return to work with just a wage freeze. But the company hired a lot of replacement workers, and began operating without strikers.

The strike dragged on into the fall, and winter. By spring, Luckinbill was exhausted, and with help from his dad moved to Oregon to find work.

“A lot of guys lost homes, lost families. It was a nightmare.”

After a year, a request for a union decertification election was filed with the National Labor Relations Board. Replacement workers got to vote, and they voted the union out.

Luckinbill rebuilt his life, finding nonunion work in in Grants Pass. Later he drove a school bus as a Teamster and spent his final working years as a city bus driver for Rogue Valley Transportation District. There he got involved in his union as an assistant steward.

Luckinbill says he has no regrets.

But it was a life changing experience. Before, he imagined a good life in the redwood forest he loved. After, he had to relocate and make a new life.

On August 18, 1994, Stu Fishman was working at an Albertson’s grocery store in Beaverton when his fellow union members in United Food and Commercial Workers Local 555 went on strike at local Fred Meyer stores, and were joined by Teamsters at Fred Meyer warehouses. Strikers wanted minimum scheduling and more full time employment. In those days, Fred Meyer, Albertson’s, Safeway, and Kienow’s (a now defunct local chain) were all in the same multi-employer union contract. The union plan was to focus first on Fred Meyer, then move on to other grocery employers. But in an extraordinary show of boss solidarity, the employers agreed that if one of them was struck, the others would lock out their union employees. [Today such a tactic would be disastrous for an Oregon employer because of a 2007 state law making locked out workers eligible for unemployment benefits.] The employer lockout broadened the pain, but it also freed up more union members to picket the chosen target. Before it ended, the strike and lockout would last 87 days and idle about 8,000 workers.

Fishman spent those 87 days as a picket captain at a Fred Meyer store in Tigard. On the line, he remembers an abundance of community support. Drivers passing on Highway 99 honked and waved. Teamster drivers delivering goods to struck stores refused to cross picket lines, so managers and scabs had to come out and unload the truck, often with a forklift. Led by their president (now state senator) Michael Dembrow, Portland Community College faculty union members marched to our picket line in solidarity. Other union members serenaded picketers with union songs.

But Fishman also witnessed hostility and contempt on the picket line from other members of the public. A truck driver refused to stop, and a picketer had to jump out of the way. A woman told Fishman she hoped he’d lose his job, his house, and his family. Customers gave dirty looks or tore up the flyers he handed them.

“A young fellow, probably an economics student, buttonholed me explaining the strike was useless because it couldn’t overcome market forces which decided our work pay and working conditions. I yelled at him: ‘Look at my picket sign. This is a market force!’’”

Fishman remembers seeing one of his customers take a job at Albertsons during the strike.

“I asked him how he could justify it. He seemed to say that he was a retired union member, so it was okay.”

Striking meant serious sacrifice for strikers. The local did not have a reserve fund for strike pay at that time. Picketers were paid $40 per week by the UFCW International union. Many strikers got part-time jobs in order to support themselves and their families.

But Fred Meyer was in pain too. Sales plunged. The 88-day strike cost Fred Meyer $60 million, its CEO later reported. In mediation, the two sides agreed to end what had become the longest grocery strike in Portland history. Ratified by strikers, the new contracts raised wages $0.90 an hour and improved seniority language, but left scheduling more hours unresolved.

Above his desk at the Portland Parks Bureau, journeyman electrician Chuck Baker, 62, displays the certificate a union gave him decades ago in Colorado Springs: “Presented to Charles J. Baker, Jr. in recognition of your outstanding loyalty to the principles of trade unionism and your defense of workers rights during the King Soopers strike.”

Back in 1987, Baker was 28, and had been working since high school at King Sooper, a popular Colorado grocery chain.

“It was a good job, and people had careers there,” Baker said.

But Kroger Company purchased the company in 1983. Its first time bargaining with the union, the new owner proposed to cut workers’ pay a dollar an hour, Baker recalls. Baker and others said no, and on May 8, 1987, 5,400 members of UFCW Local 7 members walked off the job, and stayed out for 30 days.

Baker says participation was near universal. Top stores were completely shut down.

“Public support for us was phenomenal.”

Only a few coworkers crossed the line and, Baker recalls, when the strike ended, those workers were ostracized, and lost friends.

“Everybody’s out there struggling to get by. You’re making the sacrifice, so to see one of your coworkers walking right past you is hard to take.”

In the end, Baker says the strike was neither a win nor a loss, but a draw. King Soopers lost money. Workers accepted a pay cut.

And 35 years later, Baker is still proud that he stood strong with his coworkers.