Longtime activist Urvashi Vaid, a leader of many LGBTQ+ and other social justice organizations, died on May 14 at age 63. The article below, an interview Vaid gave last year, is posted in tribute to her life and legacy. 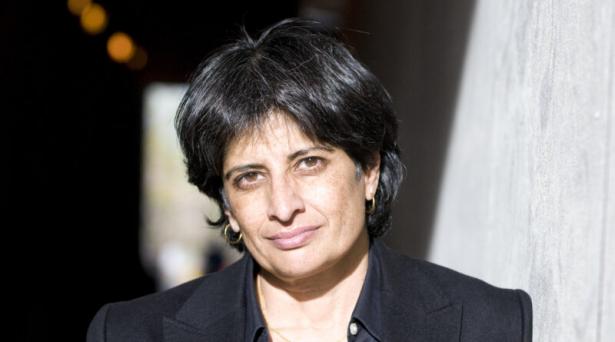 Before social justice warriors, before intersectionality, and before diversity and inclusion became the buzzwords they are today, one woman was doing it all.

Urvashi Vaid astonishes me. Even a brief perusal of her career makes it clear to me that she is a super queer of the highest order. The LGBTQ activist, author, lawyer, and consultant has achieved a formidable amount in her six decades on this planet — and more importantly, she has helped others achieve racial, reproductive, gender, sexual and economic justice goals. Urvashi is that celebrated lesbian: she who gets shit done. CEO of The Vaid Group, a consultancy firm that dismantles structural inequity based on sexual orientation, gender, race, and economic status. Founder of LPAC, the first lesbian Super PAC supporting queer and progressive women running for office. Long-term service at the National LGBTQ Task Force, including becoming its Executive Director in 1989. Countless articles, speeches, column inches and two books advocating for radical systemic change. Several positions in community service and on advisory boards. Numerous well-deserved awards, accolades and honorary degrees. And more is to come, including creating an American museum of LGBTQ culture and history. But first, this year she will launch the National LGBTQ+ Women’s Community Survey, the largest-ever data collection from the lives of queer women. 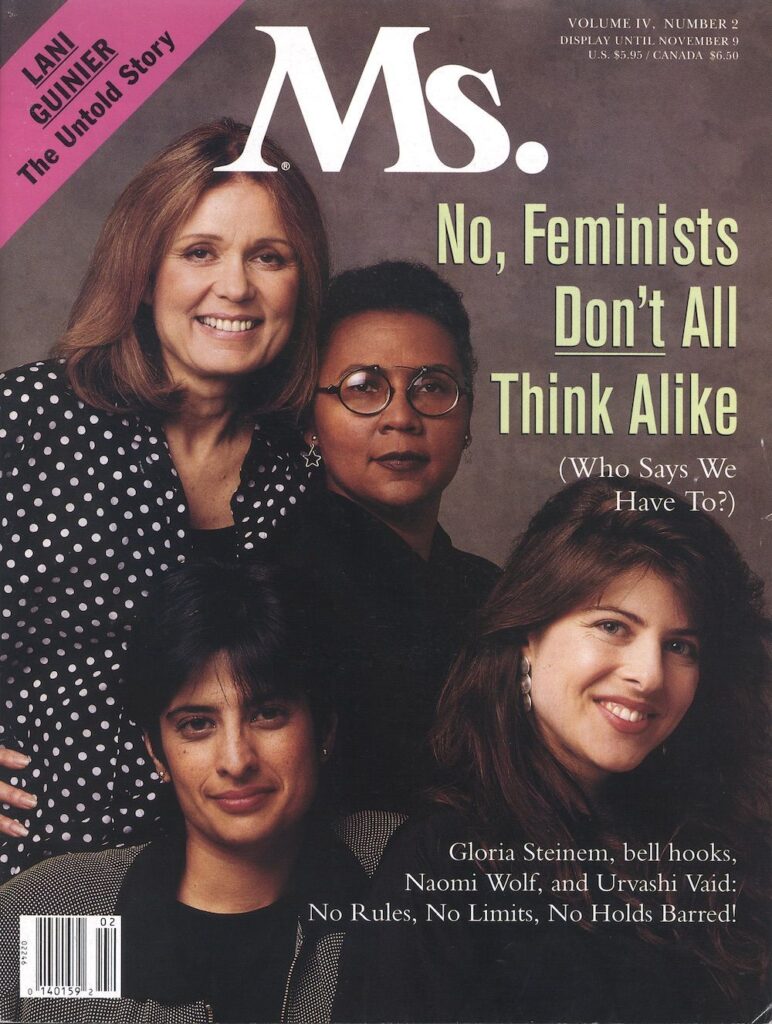 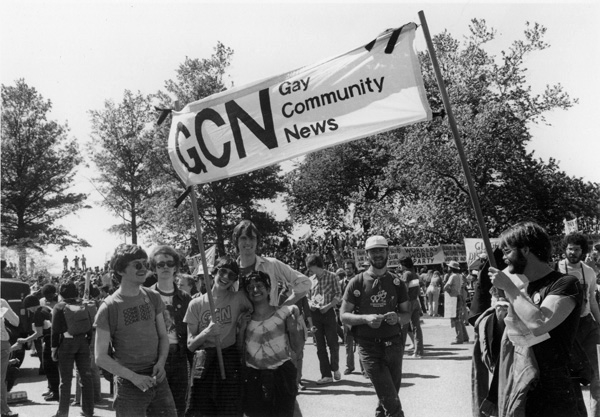 Forged in the fires of India’s inequities and America’s instabilities — she went to anti-Vietnam protests as a child and was an early proponent of co-gendered activism during the AIDS crisis — Urvashi Vaid is a once-in-a-lifetime firebrand. I couldn’t think of a better cover woman for our Women’s History Month issue. I recently caught up with her over Zoom, and here are excerpts of our conversation:

You have been an activist since the 1980s, and before many of the current terms we use were even coined.

You know, I even started in the ’70s when I was in school, and college, and I discovered I was drawn to political action and organizing change. As a 10-year-old in 1968 I paid attention to the news. You couldn’t avoid the movements that were on television. And I felt like those were my people early on. I identified with the anti-war movement and the Civil Rights movement. And then when I got to college I found the Women’s Liberation movement, LGBT activism, and that was just transformational. Being an immigrant, you see culture from multiple vantage points and that also gave me an impetus to say, I don’t agree with this, or This isn’t the way it has to be — just a critical perspective.

Where does your unshakeable sense of justice come from?

I’m not a particularly religious person, but I do believe in justice as an article of faith. Early in my life I got involved in movements like the anti-apartheid movement, and that was just a vivid example of injustice, you know, the apartheid regime in South Africa. Because that injustice was so stark and, similarly, looking at racism and the impact and legacies of slavery in this country, once you start to pay attention and understand it, you can’t ignore it. It’s in every institution, it’s in every situation that you find yourself in. Coming from India, where I grew up until I was eight, you see so much poverty and that exposure gave me a real sense of where this is wrong, that amidst so much wealth, so many people have nothing. 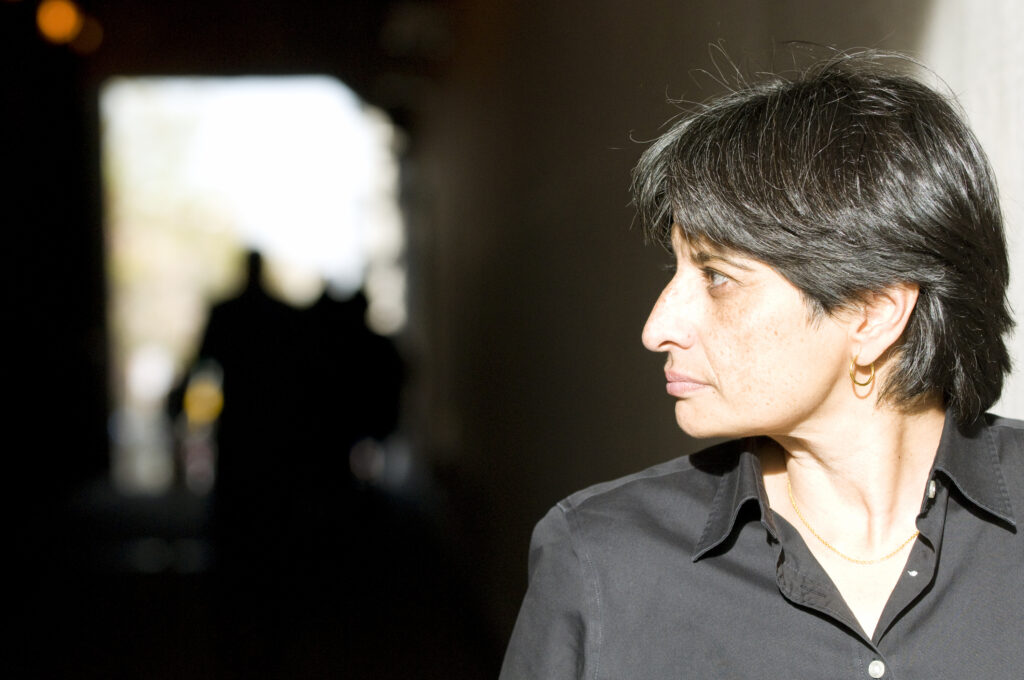 Did your priorities, intentions or goals shift or magnify during the Trump administration?

I’ve been focused the last six years on poverty and the LGBTQ community, and addressing economic disparity. I’ve been focused always on racial justice, and it’s been really extraordinary to see how the Black Lives Matter leadership has transformed conversation in this country. The other thing is, we have to win governing power to ensure that we elect people who carry the values we believe in. I think what Trump and the takeover of the Republican Party by the right wing has shown is that we’re in a battle of ideology in this country, and I reject that fascist and authoritarian ideology. I reject it. Top to bottom, there’s nothing good about it, it’s a destructive, oppressive tradition-based value system that is shared by millions of people who believe that women’s equality is a threat, that LGBTQ people’s emergence and that transgender people are a danger to them. Millions of people actually believe that they’re not racist, but they do not understand the privileging of whiteness in this country. Trump is a genius at exploiting these cultural threads to build political power and I think there’s a very good chance over the next four years that he will be the nominee again and we have to do everything in our power to defeat those forces on the right. … The impact of the pandemic has been devastating. I was thinking about how, you know, in ’92, we were marching around, protesting the Republican National Convention, and I was part of the different protest that ACT UP and others organized. I was at the task force at the time and we were organizing the protest and we would chant “40,000 dead from AIDS.” Where was George? Five hundred thousand dead from Covid. And no accountability for that loss from Trump and others.

You have consistently said that mainstreaming the LGBTQ community does not necessarily translate into full equal rights.

Equality is like a precondition to actual justice. You have to have what we call equality, but I’ve long argued that it’s not the end goal; it’s a step along the way towards a restructuring of the economic and social systems in this country so that they’re oriented towards caring for people and supporting families and allowing people to fulfill their individual potential. … And that’s the goal of any movement: to create maximum freedom for the maximum number of people, to be able to live their lives and form their families and create their community and create themselves in the way that they want to, without prejudice, discrimination or burden, and with real opportunity. It sounds idealistic, the goal, but I’m a very pragmatic person and there’s no doubt in my mind that we could turn this society and the world in a more caring direction. But we’re up against a very traditional old mindset, that some people are better than others, that white people are better than Black people, that men are better than women, gay people are sinful. We still face all that. So I think we actually represent a fundamentally different way of thinking about people, about structures of power, about how to distribute resources equitably.

What has marriage equality done for our community?

We represent a lot of different things about how to create equal relationships across genders, about how to blast open gender. It’s quite amazing, you know, when you think about who LGBTQ people are, we are ultimate outsiders. My partner and beloved spouse, Kate Clinton, said that the amazing thing about marriage equality was how it turned sexual outlaws into in-laws and made us much more comprehensible to everybody. Marriage made us more legible for people because they recognized our relationships as something that they have. We want that equality. We want that respect and recognition and access to those institutions. But I think my relationship with Kate is built on a different kind of egalitarian gender footing than many straight relationships. I think we represent a different way of doing relationships, a different way of forming families that I think can inform other people’s ways of doing things. 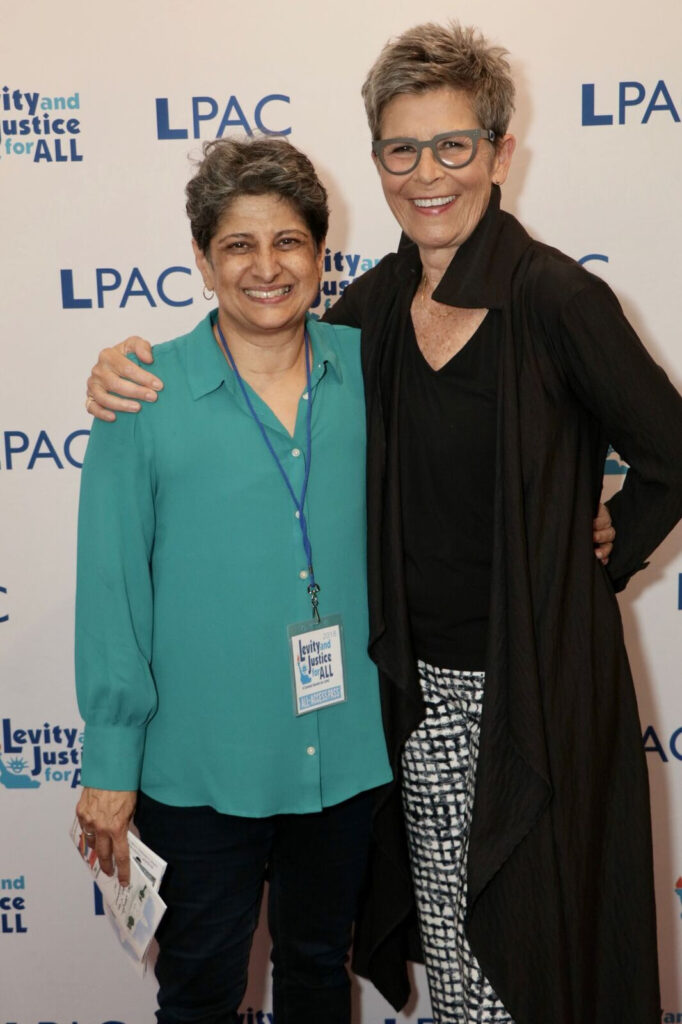 Urvashi Vaid (L) with her partner of 33 years, Kate Clinton

You two make an incredible couple. Advice, please. How do you make it work? How do you sustain a long-term lesbian relationship?

I’ve blessed my stars every day that I met her 33 years ago. You know, I think it’s really communication. We talk a lot to each other. She’s still the person I want to tell all my stories to, about the day or what happened, and I think we’re also really strong in ourselves and we really support each other. We are each other’s strength. I see some relationships in which people get freaked out by the other person’s strength or success. And it’s never been the case. Kate has just been amazing. She’s taught me so much. We always joke and you probably heard us say this, that we’re in a marriage of comedy and tragedy — and you get to decide who is which, depending on the day. Like many funny people, she’s terribly serious and studious and quiet in many ways and just absolutely brilliant. But she’s also truly, deeply funny and has this kindness and lightness to her that I just love. Kate is one of the most kind and gentle people I’ve ever met.

Thirty-three years together is a long time. How do you view getting older as a queer woman?

Those nuances, the uniqueness of our identities and relationships and lives, this is something you want to capture in your National LGBTQ+ Women’s Community Survey. When did you decide this was an essential project?

A little over three years ago I was thinking about how lesbians are so diverse. You have women who were lesbians until graduation. You have women who were married to a man for 60 years and then came out. You have women who were with women for 50 years and then went back to being with a man. Bisexual, trans, pan women. There’s so many identities, so much range in gender and sexual diversity but most people don’t see that. The other thing was that when I looked at the agenda of queer organizations, it didn’t reflect anything specific to the lives of female-gender people. Reproductive issues are barely on the agenda. Pay inequality is not on the agenda of gay organizations. Why not? 50 percent of our community is affected by that. Violence against trans women and queer women is barely on the agenda. Anti-violence movements deal with it in our communities, but it’s not really championed. So I thought, well, how do you address that? You make a survey to go out into the community and ask people about our lives as LGBTQ+ women: How do you define yourself? How do you make family? What’s your experience in health and discrimination with housing? How has your experience been with the criminal legal system? Where do you find support? So a range of questions opened up and I realized how little I knew about our community. … So we created this inclusive platform called The National LGBTQ+ Women*s Community Survey. We want to get responses from anybody who identifies or has identified ever with the category LGBTQ+ womxn in their life. It’s an open invitation to share your experience that will show us snapshots of our community and those will be very valuable in putting LGBTQ+ women more centrally on the agenda of our movement and the women’s movement.

Now, are you going to take the survey?

Oh, Hell yes. I think every single LGBTQ+ woman who has ever partnered with another woman should consider taking the survey, to just put her experience into the mix. We want thousands of responses. Hopefully the survey will lead other activists and scholars to say, OK, we want to go deeper in this area. This is just the beginning.

Merryn Johns is the Editor in Chief of Queer Forty. She is an award-winning journalist and public speaker. Originally from Sydney, Australia she has been based in New York City for 15 years, editing and writing for a variety of publications.