Mexican laws generally protect the rights of health workers. But worker rights advocates caution that adopting this model of a precarious distribution platform by other industries can encourage informal work without social security.

May 27, 2022 DANIELA DIB and TAMLIN MAGEE rest of world
Printer friendly
A Delivery App Tackles Health Care With One Slight Difference: Workers Have Rights Published May 27, 2022 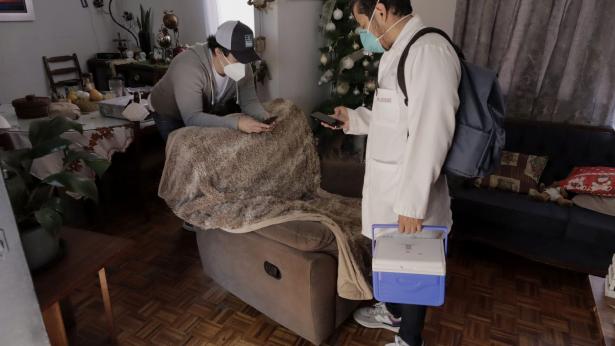 Donning a medical robe and a helmet, one nurse working through last-mile app Rappi’s home-delivery shifts — who spoke to Rest of World on condition of anonymity to protect his job — said he was recruited in early 2022 by a private medical lab partnered with the app. He usually does eight-hour shifts from 7 a.m. to 3 p.m. and moves around by a motorcycle provided by his lab, which also pays for his fuel. He’s particularly satisfied with his new job.

“I get around much faster on the motorcycle. … So my shift usually ends on time,” he told Rest of World. “Sometimes I go to the park or have lunch between appointments.”

Rappi, the ubiquitous last-mile delivery platform founded in 2015 in Colombia, allows users in Mexico City and Bogotá to order and make appointments to get blood drawn for clinical lab tests — for pregnancy, STIs, and Covid-19 — as well as to get vaccinations for HPV, herpes, and pneumococcal disease delivered and applied at their own homes. Starting with Covid-19 testing in 2020, Rappi now acts as an intermediary for half a dozen health care providers in Mexico City, whose staff apply tests or vaccines and then process the results.

Rappi executives and one of the company’s partnered health care providers told Rest of World that the pandemic offered a mutually beneficial opportunity for partnership. But health care workers also came out winning, according to the lab staff that spoke to Rest of World. For the nurse who asked to remain anonymous, the delivery gig meant an opportunity to secure a full-time job. For Viviana López, also a trained nurse who has been fully employed for seven years by Previta, a Rappi-partnered provider, and supervises its lab department, it was a chance to do better at her job. “For medical workers like us, it’s very fulfilling to be closer to the patients in times like these.”

Rappi came upon the model of health delivery through partnerships after botching much of its own company’s health care policy throughout the Covid-19 pandemic. The self-proclaimed super app stumbled first as it tried to ramp up its delivery services for millions more people in lockdown and also when it infamously tried to assign a small number of Covid-19 vaccines to its workers on the basis of their delivery performance. The company swiftly backtracked, but it never lost sight of the opportunities offered by “medical services, for tests and vaccinations at home,” Gloria Ruiz, new verticals manager at Rappi Mexico, told Rest of World.

After a user orders a health service on the Rappi app, the lab takes care of the rest. The health care provider receives a notification, and one of its employees is sent to the customer’s home. Unlike the last-mile delivery app’s rappitenderos, who carry trademark oversized orange backpacks, health workers are armed with normal packs, filled with tourniquets, needles, gauze, and other medical equipment. The worker races back to the lab before their next appointment with many of the results sent to users within 24 hours through WhatsApp or email — not via the Rappi app itself.

Because of their employers’ partnership with Rappi, both López and the anonymous nurse have become delivery workers and yet are far from being gig workers.

“You become a gig worker,” Miguel Díaz Santana, coordinator for digital workers at grassroots workers’ rights and civic advocacy group, Nosotrxs, told Rest of World, “when you don’t have a secure salary, benefits, or employment rights.”

But the two nurses interviewed were, at least, fully employed by the companies providing the health workers for Rappi. Morgan Guerra, co-founder, CEO, and head of medical affairs at Previta, the lab that employs López, said that though his company does not employ all its medical staff full time, all of the workers who provide at-home services via Rappi are. It’s a stark contrast to the circumstances of typical last-mile app delivery workers, who work long hours as third-party contractors and are paid per job without any type of social benefit.

A selection of Covid-19 tests offered on the Rappi app. Rappi

“In the gig worker–employer relationship, work does not disappear — what disappears is the employer as the one who has to guarantee those labor rights,” said Díaz Santana.

Though last-mile delivery apps, like Rappi, have faced criticism for the working conditions of mobile couriers over the course of the pandemic, Ingrid Ortiz, attorney and digital health specialist at Mexico City–based law firm Olivares, said legislation in Mexico relating to labor and health is not as flexible as consumer product delivery. This has meant that the rights of health workers are generally assured.

For medical providers, partnering with Rappi was a “natural fit,” said Guerra. Early during the pandemic, his company was forced to go from providing health services to people through their employers to going directly to individual customers via their own e-commerce platform.

“Everyone became an expert in rapid tests,” Guerra told Rest of World, referring to the multitude of small testing companies that sprang up during the pandemic. “We realized we had to keep up, so we partnered with Rappi to offer business-to-consumer services,” bolstering their own in-house platform.

However, Díaz Santana expressed concern about the on-demand model being adopted by more industries and what it meant for those making the deliveries. The danger is that the delivery model spearheaded by Rappi could become the thin end of the wedge for introducing other practices that casualize labor: “It’s worrying that other industries adopt the precarious model of distribution platforms, since they’re occupations that do not grant social security and encourage informal labor,” he said.

Even though online health care has not been addressed directly in any specific legislation, attorney Ortiz said that “under Mexican labor law, they most likely have a contract with the partnering lab, meaning established working hours and the need for the lab to be in compliance with certain specific regulatory requirements.”

Ortiz did expect the practice of health care home-delivery to grow. “Due to the country’s size, Mexico is one of the most attractive markets in Latin America, so sooner rather than later, it will be a target for all the players involved in this field,” she said.