Although providing food and employment to tens of thousands might seem the right thing to do, Chief Executive Chris Kempczinski said in a letter to employees, "it is impossible to ignore the humanitarian crisis caused by the war in Ukraine." 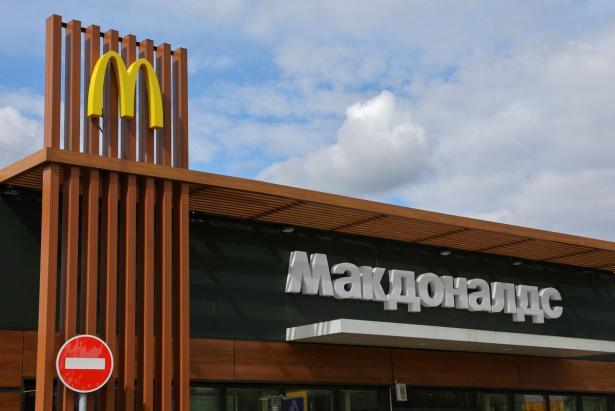 A closed McDonald's in Moscow May 16, 2022, REUTERS/Evgenia Novozhenina

Russians lined up in a closed McDonald's restaurant in Moscow on Tuesday for what may be their last Big Mac from one of the few McDonald's (MCD.N) restaurants still open in the country.

The world's largest burger chain is rolling down the shutters in Russia after more than 30 years, becoming one of the biggest global brands to leave following Moscow's actions in Ukraine.

McDonald's exit ends a chapter in the U.S. company's history that began when it started serving its burgers in Russia as a symbol of American capitalism.

The company had already decided to temporarily close its restaurants in the country in March. They included the iconic Pushkin Square location in central Moscow, which broke global records when opening on Jan. 31, 1990, as more than 30,000 people queued around the block for Big Macs costing 3 roubles.

"McDonald's operates in few places now," said 32-year-old Irina, who was queuing at the branch in Moscow's Leningradsky Station, from where trains head north to St Petersburg. "I miss McDonald's, so when I go to St Petersburg, I drop by and treat myself to a Big Mac."

McDonald's plans to sell 84% of its nearly 850 restaurants in Russia to a local buyer. The future of the remaining restaurants, operated by franchisees, is unclear.

The new owners will not be allowed to use Mcdonald's name, logo, branding and menu. That left some Russians worried that the quality will suffer.

"I read yesterday that McDonald's was closing soon and opening under a new name, so I rushed here today to buy my favourite cheeseburger, milkshake and chips," said Alla, 21. "What if the quality gets worse after the rebranding?"

The franchised restaurants remain open and have seen a pick up in business since McDonald's closed its outlets.

"In accessible locations in the centre of Moscow and St Petersburg we are seeing elevated demand," franchisee Rosinter Restaurants (ROST.MM) said on Tuesday.

McDonald's will retain its trademark in Russia, which analysts said left the door open for a return. In the meantime restaurants will start reopening under new ownership and branding in June, a source close to the company said.

In southern Russia and Siberia, some franchised outlets are still trading.

One man from southern Russia drove for two and a half hours to find an open restaurant, he said in an online review posted on Yandex on April 21.

"I came to this McDonald's especially from Samara, only 250km," the user wrote. "I remembered the atmosphere and happily dived into it.

"The food and burgers are just as tasty and flavourful," he said. "Thank you for being relatively close by."

The burger chain came to symbolise a thawing of Cold War tensions and was a way for millions of Soviet citizens to sample Western food and culture, even though the cost of a burger was several times bigger than the daily budgets of many city dwellers.

In the past few years, McDonald's has became one of the most affordable, and quick, lunch options in Russia. Based on The Economist magazine's Big Mac index, which shows purchasing power parity, the rouble was the most undervalued currency in early February 2022.

"Standing in a queue for a while is nothing to be afraid of, if one remembers how long we stood in the 90s, said Ivan Tumanov, 45, who was also waiting in line at Leningradsky Station. "Let's remind ourselves today of a taste of the West."