Under Vladimir Putin, Russia’s Communist Party has been a tame opposition kept on a tight leash. With a few brave exceptions, the party has eagerly supported the war in Ukraine. 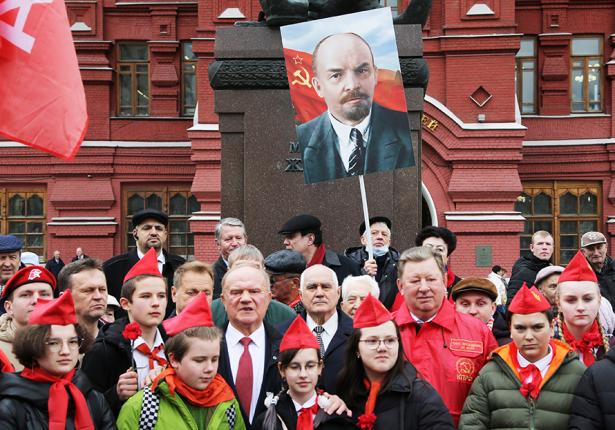 In his address on 22 February, just before Russia invaded Ukraine, Vladimir Putin set out his ideological justification for the war. He presented Ukraine, within its current borders, as an artificial entity created by the Bolsheviks, which today can ‘rightfully [be] called “Vladimir Lenin’s Ukraine” ’.

Putin, who on coming to power 20 years ago, described the break-up of the USSR as a ‘major geopolitical disaster’, now believes the real tragedy was the creation of the Soviet Union: ‘The disintegration of our united country was brought about by historic, strategic mistakes on the part of the Bolshevik leaders,’ he said, and criticised Lenin for giving every republic the constitutional right to leave the Soviet Union. By making the war in Ukraine what he calls a ‘real “decommunisation” ’, Putin wants to finally turn the page on Soviet history and return to the principles of the pre-revolutionary Russian empire.

This overt anti-communism did not stop the Communist Party of the Russian Federation (CPRF) — or rather, its leadership — unreservedly backing Putin’s ‘special operation’ in Ukraine. This is because the party, the second largest in the Duma, has in recent years undergone a major transformation of its activist base and especially its voters, some of whom are now suffering repression for being part of the anti-war movement.

Although in the introduction to its manifesto, the CPRF claims to be the direct descendant of the Bolshevik party, its real history dates from 1993. Two years earlier, after the demise of the USSR, President Boris Yeltsin had dissolved the Soviet Communist Party, which then spawned a multitude of leftwing political groups fiercely opposed to the ‘shock therapy’ Yeltsin had administered to Russia’s economy. To sideline them, the government encouraged a new, moderate opposition that was prepared to play by the rules of the new political game. Yeltsin therefore authorised a re-formed communist party, having decided not to ban ‘criminal communist ideology’, as some Eastern European countries had done.

In February 1993 the CPRF’s founding congress elected Gennady Zyuganov as leader (a position he still holds). After the forcible dissolution of the Supreme Soviet (Russian parliament) in October 1993, which was the prelude to establishing an authoritarian presidential system, the CPRF gained a virtual monopoly on the left wing of the new party system. In exchange, the party submitted itself to a tacit rule: no matter how many votes they won, the communists should not threaten the country’s strategic direction. In particular, this meant dropping their opposition to further privatisation and to the construction of a market economy. By channelling discontent, they contributed to the country’s stability for a long time.

The largest activist base

Throughout the 1990s and 2000s, the CPRF remained the party with the largest activist base (500,000 members at its peak) and the only one that could mobilise tens of thousands of demonstrators. Its members’ enthusiasm meant it could run successful election campaigns despite limited finances and almost no access to television. The party came first in the 1995 Duma election and in 1996 Zyuganov reached the second round of the presidential election, only narrowly losing to Boris Yeltsin. Though this election was marked by significant manipulation, the communists recognised the result.

After Putin came to power in 2000, Russia’s political system became progressively harsher and the Kremlin was increasingly unwilling to tolerate the CPRF’s success and relative autonomy. The presidential administration forced communist leaders to expel all radical elements and exerted greater financial control over them. Whereas in the early 2000s, membership fees had contributed over half the party’s income, that figure had fallen to just 6% by 2015. State funding, meanwhile, accounted for 89%.

The docility with which the CPRF fulfilled its role as a ‘constructive’ opposition led to it losing members (only 160,000 remained by 2016) and losing at the ballot box. It found itself torn between the obligation to remain loyal to the Kremlin and the need for new supporters. In 2011, although it suffered most from ballot box stuffing, the Communist Party stayed away from demonstrations against electoral fraud, leaving the liberal opposition to carry the torch for public freedom.

In the March 2018 presidential election, however, the CPRF took a first serious step towards electoral challenge. It put up as its candidate Pavel Grudinin, an entrepreneur at the head of a privatised former sovkhoz (state-owned farm), whose rhetoric departed from the usual communist tropes. Grudinin, virtually unknown to the general public, focused on current social problems, not the achievements of the Soviet past.

Despite calls from the ‘non-systemic’ opposition figure Alexei Navalny to boycott the election (in which he was barred from standing), Grudinin came second in the first round with 11.7% of the vote (8.6 million) — an achievement in a presidential election traditionally dominated by Putin. This result inspired Navalny to change tack and launch ‘smart voting’ in autumn 2018. Navalny asked his supporters to vote for the candidates best placed to beat United Russia (which generally meant the communists).

This change came hard on the heels of demonstrations in summer 2018 against the government’s decision to raise the retirement age. The measure was so unpopular it strengthened the opposition, especially the communists. In September 2018 the CPRF won elections in the Irkutsk and Khakassia regions and in some cities in the Ulyanovsk and Samara regions. It kept up this momentum in autumn 2019, taking a third of the seats in the Moscow city parliament (13 out of 45 seats).

A paradoxical situation was becoming apparent: some of the liberal urban middle class had started voting against their own principles and ideological inclinations. The electoral map of CPRF support was changing. Whereas in the 1990s and 2000s, the Communist Party’s voters came mainly from Russia’s agricultural south, they were by the end of the decade mainly in industrialised regions and in the big cities. In the most recent parliamentary election in September 2021, the CPRF won many votes in Yekaterinburg, Irkutsk, Khabarovsk and Chelyabinsk, although none of these cities of several million inhabitants belonged to the ‘red belt’ of the 1990s. In Moscow and St Petersburg, traditionally more liberal than elsewhere, the CPRF won 22% and 17.9% of the vote respectively, while the liberal opposition Yabloko Party suffered a crushing defeat. The Communist Party was clearly outstripping the rest of the opposition: it was more than 10% ahead of Vladimir Zhirinovsky’s far-right Liberal Democratic Party of Russia, with which it had been on a par in the 2016 parliamentary election (at around 13%).

Despite its new support base, the party has not changed significantly in ideology or structure. Its official manifesto still bears the imprint of Stalinism, nationalism and the defence of a paternalistic welfare state in the spirit of the final years of the USSR. In it, the party states its attachment to ‘the dynamic Marxist-Leninist doctrine’, adding that ‘with the restoration of capitalism, the Russian question has become extremely acute’, condemning the ‘genocide of a great nation’ and asserting the need to protect Russian civilisation from the assault of the materialist, soulless West.

In keeping with this, the Communist parliamentary group has even been an active supporter of the aggression against Ukraine: on 19 January, as Russian troops held manoeuvres on the border and Western leaders kept up their dialogue with Putin, 11 Communist MPs, including Zyuganov, put forward a resolution in the Duma calling on Putin to recognise the independence of the ‘people’s republics’ of eastern Ukraine and end the ‘genocide’ of their people.

This demand was tantamount to ending negotiations on the Minsk agreements (which recognised Donetsk and Luhansk as part of Ukraine) and immediately starting a military conflict. At first, United Russia, which holds a parliamentary majority, did not back it, on the grounds that it was too radical. But it was this motion, approved by an absolute majority in parliament a month later, which later served as the basis for the invasion.

On the first day of the war, the Communist Party put out an official statement affirming its full support for Putin’s policy on Ukraine, carefully avoiding the words ‘war’ and ‘military operations’. This statement echoed the official rhetoric on the need to ‘demilitarise and de-nazify’ Ukraine and asserted the urgency of countering the plans of the ‘United States and its NATO satellites to enslave Ukraine’. In a further statement on 12 April, six weeks into the war, the CPRF described Ukraine as the ‘world centre of neo-Nazism’ and called for ‘the mobilisation of Russia’s spiritual and economic resources to repel liberal fascism’, establishing a state of emergency and strict public regulation of the economy given the confrontation with the West.

Even so, the only three Russian MPs with the courage to publicly criticise the invasion of Ukraine also belong to the communist group. One of them, Oleg Smolin, respected for his long-standing fight against the privatisation of education, said early in the war, ‘Military force should be used in politics only as a last resort. All the military experts tell us that large-scale military action in Ukraine would be far from straightforward. I feel sadness over all those human lives, ours and others.’

Vyacheslav Markhayev, who represents Buryatia, also spoke out strongly against the war, saying that ‘the whole campaign for the recognition of the DNR [Donetsk People’s Republic] and LNR [Luhansk People’s Republic] had a hidden agenda ... very different [from the original plan put forward by the Communist MPs] ... And here we are in full-scale war between two states.’ More soldiers from the oblast he represents in Siberia have been killed in action than from any other since military operations began.

Several local CPRF representatives from the regions of Voronezh, Vladivostok, the Komi Republic and Yakutia have also taken a stand against the war. One of the most talented representatives of the party’s younger generation, Moscow city councillor Yevgeny Stupin, co-founded a leftwing anti-war coalition that brings together several political groups unrepresented in the Duma. For these activists, openly coming out against the war means defying the CPRF leadership’s line and being prepared to leave its ranks. Several of them were expelled even before they could hand in their cards.

Other organisations to the left of the CPRF have taken an active part in peace protests. The Russian Socialist Movement (which has links with France’s New Anticapitalist Party) issued a joint statement with the Ukrainian left Sotsіalniy Rukh (Social Movement), a rare Russian-Ukrainian initiative. The statement condemns Russia’s criminal and imperialist war and supports all measures aimed at ending the conflict, including sanctions on oil and gas and supplying weapons to Ukraine for self-defence. This statement is especially significant as the Ukrainian security services have been targeting the domestic left, which they suspect of being unpatriotic. Russian anarchists in Avtonomnoe Deistvie (Autonomous Action) have called on ‘Russian soldiers to desert, disobey criminal orders and leave Ukraine immediately’.

The war with Ukraine has only confirmed the division between those nostalgic for the era of USSR’s state power and those for whom being on the left means a commitment to a democratic, anti-authoritarian and forward-looking project. Today, when any call to resist imperialist aggression by the Russian government risks repression and hostility from the rest of society, the anti-war left looks isolated. But it’s worth remembering that in 1917, during the first world war, those who called on Russian soldiers to disobey their officers’ orders, against all expectations, came to power. And set Ukraine’s current internationally recognised borders — yet another reason for Putin to hate Lenin.

[Ilya Budraitskis is an essayist and political theorist who teaches at the Moscow School of Social and Economic Sciences and the Institute of Contemporary Art Moscow. He is the author of Dissidents among dissidents: Ideology, politics and the Left in post-Soviet Russia, Verso, London, 2022.]