labor Secret Operation Tests Whether Chipotle’s Hiring May Be Racist

Here’s what happened when fake job applications went out to a fast-food brand with a social justice message. 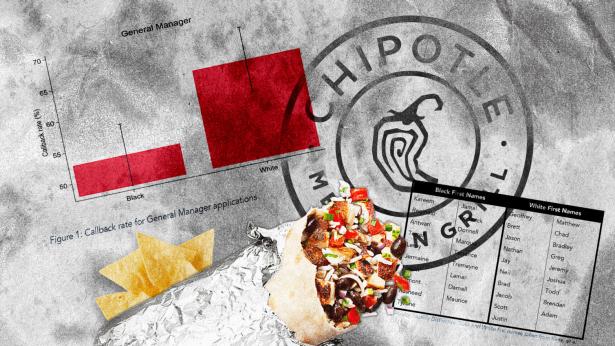 On paper, Antwan Braxton seemed like a strong contender for a general manager job at Chipotle, especially when compared to a candidate named Neil Klein.

Braxton’s application claimed one more year of general manager experience than Klein’s. His touted a ServSafe Food Protection Manager Certificate and a Manager of the Quarter Award at his latest job—neither of which Klein’s did.

Yet after 12 Chipotle job applications were submitted under each name between a three-day February period in the same Missouri zip code, Klein was sent one email, one voicemail, and one text message by the Tex-Mex chain’s recruiters, according to a new report testing possible discrimination by the company.

Braxton, however, was sent none at all. And besides Braxton’s apparently superior qualifications, the only major difference between the two applicants, both of whom were fictitious, according to the report: that Braxton appeared to be a Black man, and Klein did not.

“Antwan Braxton was clearly more qualified than Neil Klein—yet he did not get any calls back,” Sara Surface, director of Civil Rights Testing at the advocacy group Equal Rights Center (ERC), which provided research for the report, told The Daily Beast.

Braxton and Klein were among 312 simulated applicant duos tested in a research report released Wednesday by the ERC and labor group 32BJ SEIU/Fast Food Union to investigate potential discrimination in Chipotle’s hiring process for managers. Employing a well-established research tool called “correspondence testing,” the report used a bot to submit “one white applicant and a similarly situated Black applicant, indicated by racially distinctive first names and surnames,” for open positions.

The report, titled “Unequal Opportunity: Uncovering Discrimination in Hiring at Chipotle Mexican Grill” and first obtained by The Daily Beast, reached credible and disturbing—if also limited—conclusions, experts say. Specifically, of the applications submitted in 37 states over a three-week period in February, white applicants heard back from recruiters about “significantly” more jobs than Black applicants, the report found.

The results make for a stark contrast with the fast-food chain’s previous commitment to diversity and ending racial inequality. They also arrive just one day after the New York State Comptroller issued a statement calling on Chipotle shareholders to support a proposal for an independent audit of the company’s civil rights, racial equality, and diversity practices.

In a statement to The Daily Beast, Chipotle’s Chief Diversity, Inclusion and People Officer Marissa Andrada stressed that the company “is committed to fostering a culture that champions diversity, ensures equity, and celebrates inclusion,” noting that more than half of the their U.S. employee population is female and 68 percent is “comprised of racial and ethnic minorities.”

“While we have not received, nor had a chance to review the validity of the study, we receive nearly 20,000 applications per week, so a sample set of several hundred false applications does not provide an accurate depiction of our hiring process,” Andrada added. “The majority of our restaurants are currently staffed, therefore, applicants are called back based on the employment needs in each location.”

The report makes note of publicly available data from Chipotle’s 2020 diversity breakdown, which shows that while 19 percent of hourly restaurant workers were Black, those figures dropped to 11 percent for salaried managers, and 6 percent of senior field managers. To date, there are zero Black members of Chipotle’s executive leadership team.

Experts who reviewed the report on behalf of The Daily Beast concluded that the findings were statistically credible and used a fairly standard methodology of social science. They also cautioned that the report was not peer-reviewed and was conducted on behalf of an interested party in a labor union seeking to organize workers at the company.

That being said, according to Rutgers Law Professor David Lopez, the report’s findings “provide a red flag worth following up on.”

“I hope Chipotle does,” Lopez, who is also the former general counsel of the U.S. Equal Employment Opportunity Commission, told The Daily Beast. “I don’t know what the endgame is for this union, but I do hope that Chipotle takes these findings seriously. This does not prove discrimination, but it does raise enough questions and shows enough data points—that [it] is worth digging a little deeper.”

To conduct the experiment on Chipotle’s hiring methods, ERC submitted a total of 624 job applications, including 416 for general manager roles and 208 for apprentice or assistant general manager positions between Feb. 21 and March 10. A 32BJ researcher told The Daily Beast the decision to only focus on these types of roles was because they are a “crucial first step as a gateway for a career into restaurant management.”

Correspondence testing refers to the technique of sending carefully constructed pairs of applications to potential employers from similarly qualified fake candidates in order to control for as many other variables as possible. In this case, the test was intended to focus on race, which was captured by using a list of racially distinctive first and last names from a 2021 investigation published by the National Bureau of Economic Statistics.

“The results of the ERC’s investigation suggest that racial disparities in Chipotle’s hiring practices disproportionately denied a significant number of job opportunities to Black applicants in several regions of the U.S.,” the report added.

Independent experts canvassed by the Daily Beast—and the authors—issued multiple notes of caution in interpreting the findings.

Most crucially, the apparent phenomenon of call-backs favoring white applicants was not a universal one. Breaking the results into four geographical regions—Northeast, South, Midwest, and West—the report found that Black applicants for general manager in the West region actually received “callbacks for more job openings than did their white counterparts.”

NYU professor Samuel Estreicher also noted that it is “it is hard to prove discrimination against Blacks in hiring for managerial positions” and emphasized, again, that the report is “union sponsored.”

The director of NYU’s Center for Labor and Employment, Estreicher also raised the question of whether the “racial signifier” of the names really indicated “the presence of racial bias, rather than unfamiliarity with the name.”

The report itself noted other limitations, including a short time-frame, having to submit multiple applications by the same fake applicants in the same state, and not being able to map a callback to a specific Chipotle location—much less a specific recruiter—in some instances.

Noting that there are almost 3,000 Chipotle locations across the country, Surface emphasized in an interview that the sample size used in the report is a “small one.”

“I think in an ideal world, we could conduct a report where we would have a much higher volume of time and data,” Surface added. “With more time, and using an ideal study design, we probably would have had each pair of applicants only apply for one job and see how that does or does not affect the patterns we see in the data.”