The battle between J Street and AIPAC to influence the Democratic Party is also opening space for Palestine solidarity to enter the mainstream. 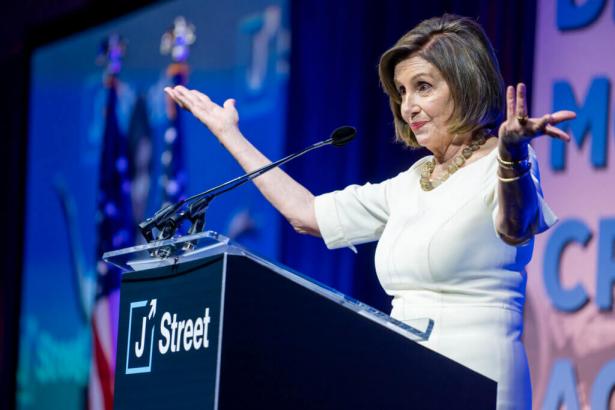 Last week, Speaker of the House Nancy Pelosi, who has a long and enduring relationship with AIPAC, accepted an endorsement from the more dovish pro-Israel PAC, J Street. It’s the first time Pelosi accepted J Street’s endorsement, and even though she is also endorsed by AIPAC’s new PAC, it’s a significant prize for the group.

For Pelosi, this is all about a delicate balance she is trying to strike in the Democratic party. She knows the growing sympathy for the Palestinians and the expiring patience with Israel many liberals, including millennial and younger Jews, are feeling. She knows that even among staunchly pro-Israel Democrats, few remain committed to the “Israel right or wrong” politics of Democratic power brokers such as Haim Saban. Yet she also knows that those power brokers still have wildly disproportionate influence in the party.

Above all, Pelosi wants to prevent the question of Palestine from causing more conflict within the party than it already has. So, she accepted the J Street endorsement and, while she has not said anything about AIPAC’s endorsing her as well, she also recognized that the J Street criticism of AIPAC over its decision to endorse over 100 Republicans who refused to acknowledge Joe Biden’s electoral victory is a powerful one that resonates broadly.

That decision by AIPAC was emblematic of its recent shift even farther right in its support of Israel. One of their main targets during this primary season has been Andy Levin (D-MI), a Jewish, Zionist liberal Democrat who, last year, introduced a bill that J Street had a key role in developing.

The “Two-State Solution Bill” would, as its name implies, enshrine that solution as official U.S. policy by law, and so the only one that could be pursued. The bill would also reaffirm that the West Bank, Gaza, and East Jerusalem are occupied territory; it would re-establish the 1977 State Department legal finding that settlements are “inconsistent” with international law; that “that settlement expansion, demolitions of Palestinian homes, revocations of residency permits, and forced evictions of Palestinian civilians by Israel impede the establishment of a Palestinian state and violate the human rights of the Palestinian people;” call for the reopening of the PLO office in Washington and remove the PLO from the list of terrorist organizations.

The bill has more provisions that AIPAC hates, such as a call for respecting Palestinians’ civil rights and a renewed call for ensuring that U.S. aid to Israel comports with U.S. law. And so, AIPAC has not just supported Levin’s opponent, Rep. Haley Stevens (D-MI), they have attacked Levin in every way they can. J Street, of course, has been front and center in defending Levin, whose bill not only defends their core value of a two-state solution, but also calls for or legislates conditions that would lead to such an outcome, assuming it was still feasible.

J Street is currently reaching out widely within the Democratic party, courting powerful conservative Democrats like Pelosi, strengthening its position among liberal Democrats, while also working to either ally with or at least avoid conflicts with the more left-wing elements in the party.

Last year, when the Democratic Socialists of America was considering expelling Rep. Jamaal Bowman (D-NY) after he went on a J Street trip to Israel and the West Bank, J Street stayed out of the fight. In May, when Jonathan Greenblatt, CEO of the Anti-Defamation League, equated anti-Zionists with the worst white nationalist antisemites, J Street president, Jeremy Ben-Ami pushed back pretty firmly, while making it clear that he still personally and organizationally objected to the anti-Zionism.

The positions J Street has staked out that have brought them into conflict with Palestine solidarity activists in the past – particularly the insistence on the two-state solution and firm opposition to the global BDS movement—remain firmly in place. But the organization these days seems to be highlighting their argument that BDS and one-staters should be debated, not ostracized or reflexively labeled antisemites.

J Street would surely argue that this has always been their position. In 2011, they even invited Rebecca Vilkomerson, then-executive director of Jewish Voice for Peace, to their conference to speak about BDS. But it was a controversial move, and one that brought significant backlash against J Street, even though many in attendance appreciated Vilkomerson’s presence. Indeed, her talk laid bare the fact that J Street’s membership included some BDS supporters.

After that, however, J Street seemed to bring their opposition to BDS more to the forefront, and they did not again include such discussions in their programs. By 2016, J Street was seen as such a staunch opponent of BDS that even the Israeli government of Benjamin Netanyahu—a government that was often openly hostile to the relatively moderately Zionist J Street—was turning to it for help in fighting the growing BDS movement.

While J Street’s anti-BDS stance has not changed, their public efforts, at least in recent months, have been much more focused on working against criminalizing BDS on free speech grounds, and distinguishing between boycotts of Israeli settlements and economic actions targeting all of Israel, supporting the decisions of others to boycott settlements, though not calling for or engaging in such actions itself.

In all of this, J Street seems to be trying to position itself to become the primary force influencing mainstream Democratic views of Israel. While their two-state fixation might still be well out of step with the rights-based view of the Palestine solidarity movement, and they remain committed to Zionism, it’s hard to argue that this would not be a better playing field than the current, AIPAC-dominated one for all those opposing the status quo, whatever their alternative visions may be.

It’s reasonable, as a long-term goal, for J Street to believe they can become the primary pro-Israel voice among Democrats. That will certainly not mean that the views of Palestine solidarity activists, supporters of a secular, democratic state in all historic Palestine, or BDS activists are suddenly going to be heard in a way that significantly alters U.S. policy. Let’s recall, that J Street supports the basic ideological and policy stances toward Israel and Palestine that were consistently held, at least officially, by successive U.S. administrations since at least 1993 apart from Donald Trump’s four years in office.

Still a recent episode in Congress demonstrates the potential for Palestinian solidarity groups’ ability to push a Democratic Congress toward more just, and productive, stances should AIPAC be removed from the equation.

In late May, J Street helped gather the signatures of 62 members of the House of Representatives and 19 Senators on a letter led by Rep. Melanie Stansbury (D-NM) and Sen. Jeff Merkley (D-OR) calling on Secretary of State Antony Blinken to convince Israel to halt the planned expulsion of over 1000 Palestinians from Masafer Yatta, a small area of villages in the West Bank where Israel has declared a “firing zone” as a pretext for removing them. The letter went as far as to say that the action would be “inconsistent” with the Geneva Conventions.

A few days later, Rep. Cori Bush (D-MO) led 15 progressive House Democrats in a letter that was much more forceful, calling the potential expulsion of the villagers a “war crime,” demanding Blinken call it one if Israel goes through with the expulsion, and that the State Department send observers to see if any U.S. weaponry was used to carry out the expulsion, which would violate U.S. law.

It’s significant that Bush’s letter got fifteen signatures, and it’s important that such a call be on the record, as a building block for the fledgling push in Congress to monitor Israel’s use of U.S. weapons, and to recognize Israel’s apartheid policies for the crimes they are. Those calls, once inconceivable in Congress, could eventually lead to changes in policy for the better. For Masafer Yatta, it’s important that a larger number of Congressmembers, and from both houses, are telling the Biden administration that they’re watching right now.

There is particular weight in the fact that eight of the fifteen signatories on Bush’s letter also signed the Stansbury/Merkley letter. Congressmembers did not see the letters, as many might have in the past, as competing between a more moderate J Street version and a more forceful one supported by both Palestine solidarity groups. (Full disclosure, ReThinking Foreign Policy, of which I am president, signed on to support the Bush letter.)

J Street’s effort opened a path for a stronger statement by those congressmembers who wished to make one and, while fifteen is not a large number, when we consider that the Bush letter raised the idea of Israeli war crimes, it’s significant compared to what we might have expected in the past.

J Street’s stated position of engaging the Palestine solidarity community is one that should be encouraged. Such engagement will inevitably expose the deep flaws in U.S. policy and the logical impossibility of continuing a single-minded pursuit of a two-state solution that, whatever one thinks of its inherent flaws or strengths, has now been rendered moot by Israeli expansionism and increased nationalistic fervor.

Above all, in a future Washington where AIPAC is aligned with Republicans and J Street with Democrats, the cone of silence over debate on U.S. policy will be shattered. That doesn’t thrust Palestine solidarity into the mainstream, but it does open space for Palestinians to be more heard than they are now. Progress.

Mitchell Plitnick is the president of ReThinking Foreign Policy. He is the co-author, with Marc Lamont Hill, of Except for Palestine: The Limits of Progressive Politics. Mitchell's previous positions include vice president at the Foundation for Middle East Peace, Director of the US Office of B'Tselem, and Co-Director of Jewish Voice for Peace.  You can find him on Twitter @MJPlitnick.

Mondoweiss covers the full picture of the struggle for justice in Palestine. Read by tens of thousands of people each month, our truth-telling journalism is an essential counterweight to the propaganda that passes for news in mainstream and legacy media.

Our news and analysis is available to everyone – which is why we need your support. Please contribute so that we can continue to raise the voices of those who advocate for the rights of Palestinians to live in dignity and peace.  Donate today →