Found: The ‘How To Draw’ Books Pablo Picasso Created for His Daughter

The previously unseen collection, to go on display in Paris, shows how the artist taught the five-year-old to master figures, animals and birds 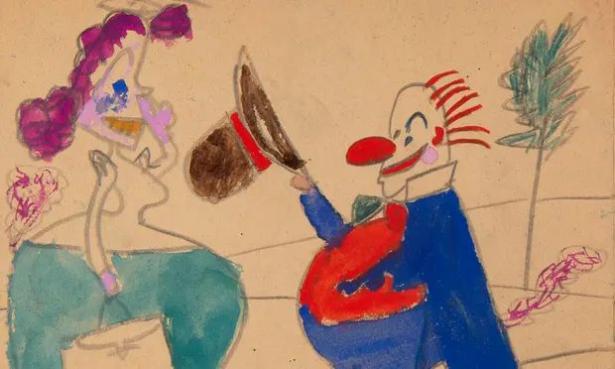 A detail from one of Picasso’s sketchbooks for his daughter., Marc Domage/© Private collection

They are the ultimate “how to draw” books for a young child, created by a doting dad who just happened to be one of the greatest artists of the 20th century. The granddaughter of Pablo Picasso has discovered an extraordinary collection of sketchbooks used by the artist to teach his eldest daughter to draw and colour.

Picasso filled the pages with playful scenes – animals, birds, clowns, acrobats, horses and doves – which would delight any child, as well as adults.

He created them for Maya Ruiz-Picasso when she was aged between five and seven. On some pages, the little girl made impressive attempts to imitate the master. She also graded her father’s work, scribbling the number “10” on a circus scene, to show her approval.

He drew two charming images of a fox longing for grapes – inspired by the 17th-century fabulist Jean de La Fontaine’s sour grapes fable, The Fox and the Grapes – and Maya coloured in one of them. He also drew simple but beautiful eagles in a single movement, without raising the pencil from the paper, conveying his love of form and pure line to her.

The previously unseen collection includes exquisite origami sculptures of birds that he brought to life for Maya from exhibition invitation cards.

His granddaughter, Diana Widmaier-Ruiz-Picasso, found the works by chance while looking through family material in storage. Intrigued, she showed them to her mother, now 86, for whom memories came flooding back. 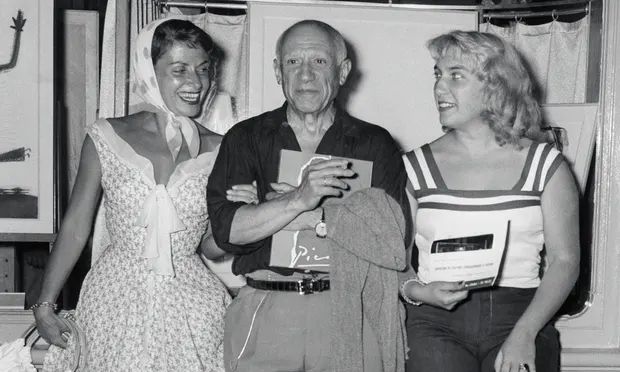 Pablo Picasso with his daughter Maya, right, and the French actress Véra Clouzot at a Cannes art exhibition in 1955. Photograph: Bettmann Archive

Widmaier-Ruiz-Picasso told the Observer: “She said, ‘Of course, those are my sketchbooks when I was little’. We tend to be very visual in the family so immediately she was plunged into that time. It was a very moving moment, not only because you’re talking about one of the greatest artists but also because it made it very human. I was excited. Then I was moved.”

Picasso, who died in 1973, had been taught to draw by his father, a professor of drawing, “so that was something natural for him to do” with Maya, his granddaughter said: “There’s a beautiful page where he’s drawing a bowl and she’s drawing a bowl.

“Sometimes she’s making an image and he’s doing another, showing her the right way to do it. Sometimes they would depict different scenes. Other times, he would draw a dog or a hat. Sometimes he’s using the whole page to draw one particular thing. Other times, he’s depicting certain scenes, scenes of the circus. It’s very interesting.”

Maya particularly remembers that, during the second world war, colour pencils and notebooks were in short supply: “That’s probably why my father wrote in my exercise books and coloured with my pencils. I still have fond memories of those moments when we met up in the kitchen to draw together. It was the only place in the apartment where it was warm.”

A page from a Pablo Picasso sketchbook discovered by his granddaughter. Photograph: Marc Domage © Private collection

Widmaier-Ruiz-Picasso is an art historian, curator and jewellery designer, who has just published her latest book, Picasso Sorcier, exploring his superstitions and belief in magic.

She described the discovery of the sketchbooks as “fortuitous” because she was co-curating a major exhibition for the Musée Picasso-Paris on his close bond with his first daughter, born of his passionate love for Marie-Thérèse Walter, whom he met in 1927 when she was just 17 and he was 28 years her senior.

The exhibition, Maya Ruiz-Picasso, daughter of Pablo, runs until 31 December and includes his many portraits of Maya, personal possessions and photographs, along with the sketchbooks and origami sculptures, which are being shown for the first time.

Whether the origami birds were made from invitation cards for his own exhibitions is unclear. The granddaughter said: “I didn’t want to open his work.”

In the exhibition’s accompanying book, she writes: “Who has never heard it said when looking at a canvas by Picasso, ‘A child could have done that!’ Many of the artistic revolutions of the 20th century were greeted with mockery and scandal, it is true, but in Picasso’s case there is a hint of truth in that judgment. As Maya, his first daughter, recalls, ‘the mystery of life, and therefore of childhood, always filled that father of mine with interest’.” 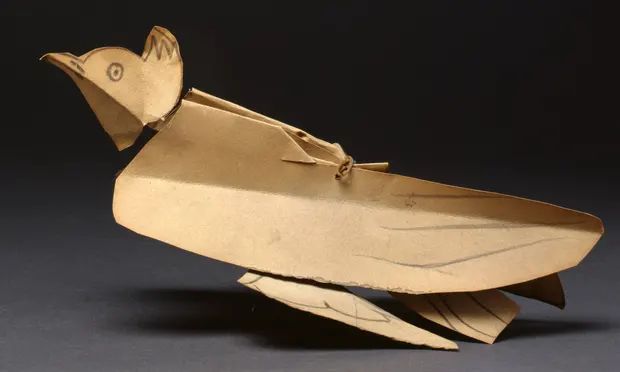 An origami bird made by Pablo Picasso for his daughter from exhibition invitation cards. Photograph: Adam Rzepka © Private collection

She adds: “Seeking a pictorial language that would break with the exhausted codes of academic realism, Picasso borrowed extensively from the unruly lines of children’s drawings. Where Van Gogh, Gauguin and Matisse concentrated on the graphic and pictorial naivety with which children draw, Picasso emphasised more the elements that upset figurative traditions, that is to say, distortion and deformity.”

Didier Ottinger, deputy director of the Musée national d’art moderne, Centre Pompidou, is currently staging a Picasso exhibition at the National Gallery of Victoria, Australia, a collaboration with the Musée Picasso-Paris. Noting that these sketchbooks reflect the artist’s fascination with childhood, he said: “Who learned from who?”

Dalya Alberge is a UK based freelance journalist writing on arts and entertainment.  Her work has appear on CNN, The Guardian, Daily Mail, Financial Times, MSN, MSN Australia, MSN Canada, MSN South Africa, MSN UK, the Independent and others.

We are proud to say we’re a reader-funded global news organisation, with more than 1.5 million supporters in 180 countries. This vital support keeps us fiercely independent, free from shareholders or a billionaire owner. It means we can keep our quality reporting open for everyone to read. We do this because we believe in information equality, and we know not everyone is in a position to pay for news. But if you are, we need you. You can make an investment in Guardian journalism today, so millions more can benefit from reliable information on the events shaping our world. Support the Guardian from as little as $1. Thank you.