Joe Biden has nominated right-wing think tank fellow Andrew Biggs to the Social Security Advisory Board. Biggs has spent his career advocating privatization and cuts to the program that provides retirement benefits for 66 million Americans. 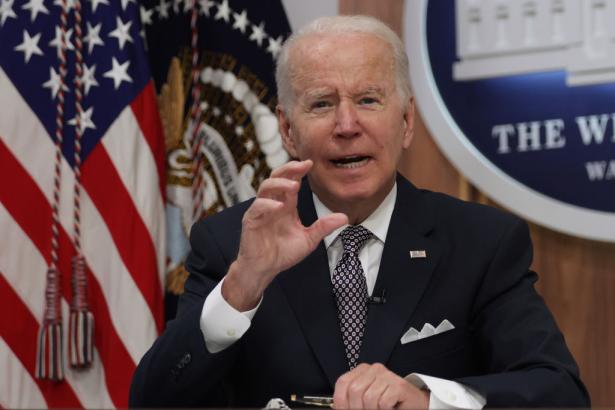 Last month, President Joe Biden nominated a longtime advocate of Social Security privatization and benefit cuts to a key board overseeing the Social Security system. The move comes as Republicans get ready to push cuts to Social Security and Medicare, if they end up winning control of Congress during the November’s midterms, as expected.

The development suggests that there could soon be a coordinated push in Washington to cut the Social Security program, which provides retirement, disability, and survivor benefits to 66 million Americans.

On May 13, Biden chose to nominate Andrew Biggs, a fellow at the right-wing American Enterprise Institute think tank, for a Republican seat on the bipartisan Social Security Advisory Board, which was created in 1994 to consult the president and Congress about the Social Security system.

For years, Biggs has been a vocal critic of expanded Social Security and workers’ right to a secure, stable retirement free from the vagaries of the stock market. He has dismissed the retirement crisis as a nonissue and as recently as 2020 blamed problems with the Social Security system on “older Americans’ game of chicken.” And two decades ago, Biggs worked on a George W. Bush administration commission that pushed to privatize Social Security.

In response to questions from us, Biggs suggested he no longer favors privatizing Social Security. Instead, he said he now believes that nations’ Social Security–like programs should be “more focused on guaranteeing against poverty in old age while middle and high-income individuals take on greater responsibility for saving for retirement on their own, such as by the government establishing universal retirement savings accounts for every worker.”

Establishing such savings accounts would be a solution in search of a problem. Social Security is incredibly successful at delivering retirement benefits, and raising taxes on the wealthy would be a straightforward way to expand the program. Alternatively, creating retirement accounts invested in the stock market would involve a much more unwieldy and risky expansion of government programs — and would be a huge boon to Wall Street.

While the seat on the bipartisan board is by tradition assigned to a Republican, Biden could have chosen a moderate candidate — or even leaned on precedent to avoid the nomination process altogether. Former president Donald Trump routinely refused to nominate Democrats for seats on boards and commissions. Furthermore, Biden could use the efforts of Senate Republicans to block speedy confirmation of many of his nominees as justification for holding the seat open, said Jeff Hauser, director at the Revolving Door Project.

“Carpal Tunnel Syndrome From Your Mouse or Something”

For Biggs, attempting to milk government programs for private sector profits is nothing new.

In 2001, Biggs was a staff analyst on George W. Bush’s commission on Social Security that advocated privatizing the government program by shifting the programs’ trust fund investments from US Treasury bills to high-fee, high-risk “personal accounts” that seniors could use to invest Social Security assets in the stock and bond markets, like employees do with their 401(k) plans.

A sample of Biggs’s writings on Social Security over the years shows that he:

For years, Biggs has led the American Enterprise Institute’s attacks on defined-benefit pensions in the public sector, pushing states and municipalities to lower the expected rate of return on their pension funds, which would make the funds look less promising and bolster the case for benefit cuts.

In 2016, President Barack Obama and Republican lawmakers appointed Biggs to the Financial Oversight and Management Board for Puerto Rico, the unelected body that effectively controls financial matters on the island, which has pushed for deep cuts in public employees’ pensions, while bailing out the island’s Wall Street bondholders.

Biggs’s background and past statements make him a questionable choice to fill the Social Security Advisory Board vacancy — if Biden had to fill the vacancy at all.

As Hauser at the Revolving Door Project pointed out, Trump would routinely refuse to nominate Democrats for the seats they were owed on other bipartisan boards and commissions, including the Federal Deposit Insurance Corporation and the Securities and Exchange Commission.

Progressives called on Democratic lawmakers to speak up and demand that Trump make the appointments — but the calls were ignored.

“Mitch McConnell and Donald Trump quietly pocket vetoed potential appointees recommended by Chuck Schumer during the Trump presidency, and sadly, the Democratic leadership ignored our call for action and never raised a fuss about it publicly,” Hauser told us.

“However, that passivity doesn’t change the fact that a precedent was set,” he added — suggesting Biden should use that precedent to avoid nominating extremists like Biggs.