tv Loot Is a Breezy Workplace Satire With No Bite 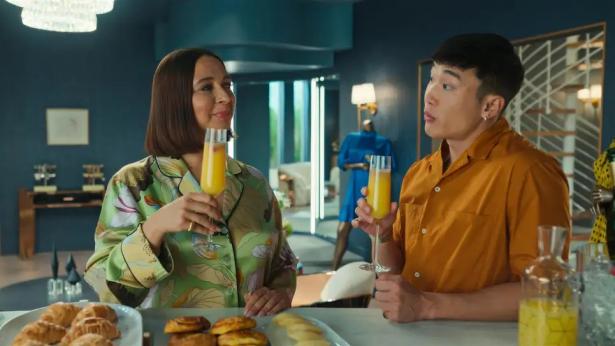 Apple TV+’s Loot is designed to poke fun at, and eventually ruminate over, its protagonist’s ridiculously extravagant lifestyle. After all, Molly Novak’s (Maya Rudolph) splashy entry includes John (Adam Scott), her rich douchebag tech husband, gifting her a massive yacht. It has several floors and four swimming pools (one of which is perfectly sized for her two dogs, whose priceless names will not be spoiled here). Molly’s life revolves around a lavish Hollywood mansion, an expensive wardrobe, fancy parties, and several maids by her side. Yet the show peaks when she examines her identity without all of it. Unfortunately, this occurs rarely and even then, Loot struggles until the end with its takes on capitalism, billionaires, and the like.

The only reason Molly—and by some extension, the show itself—finds its groove is Rudolph. The actor’s infectious energy grounds the series and prevents it from falling plainly into clichés. She softens Molly’s outbursts, whether they’re realistic fights with John after discovering his affair and divorcing him within the first 10 minutes of the premiere, or absurd tantrums upon meeting former friends. Rudolph brings warmth to Molly’s selfishness, making it impossible not to like or maybe even root for her. Admittedly, though, it’s hard to sympathize when she gets to sulk post-breakup in private jets or with the help of custom meals that David Chang cooks for her. (Yes, he cameos as her personal chef.) Money can’t buy happiness … until it can?

Like most workplace comedies, Loot’s basic premise throws together an unlikely group of people—in this case, when Molly gains a whopping $87 billion from her divorce. (Ever wondered what a show based on Mackenzie Bezos right now might look like? Loot is essentially the glossy version of it.) Molly starts working for a charity in her name that she didn’t even know existed. The Wells Foundation is spearheaded by no-nonsense Sofia Salinas (Michaela Jaé Rodriguez). Sofia runs it with the help of eccentric folks like soft-spoken accountant Arthur (Nat Faxon) and Molly’s super-optimistic cousin, Howard (Ron Funches). Loot is certainly reminiscent of Parks And Recreation (creators Alan Yang and Matt Hubbard both wrote for the NBC hit), The Office, and even The Good Place. It’s basically Apple TV+’s attempt at crafting its own network sitcom.

Molly isn’t hyper-enthusiastic like Leslie Knope, but she is extremely out-of-touch with going into an office, leading conference-room meetings, or figuring out how to actually help people. Meanwhile, Sofia is passionate about uplifting the community and solving homelessness in Los Angeles. Their dueling personalities become fodder for an implausible friendship. Molly and Sofia’s begrudging bond (ahem, Leslie and Ron) makes for a fascinating set of episodes, especially because Rodriguez goes toe-to-toe with Rudolph. After an exceptional turn in Pose, she delivers an earnest and dry comedic performance here, with almost each of her lines dripping with sarcasm.

The same applies to Joel Kim Booster, who is clearly conquering summer 2022 after Fire Island and his Netflix comedy special, Psychosexual. Booster plays Nicholas, Molly’s fiercely loyal assistant who tags along with her at work, later pursuing his true love of acting. He remains a complete delight in this role, managing to pull focus even when he’s sharing space with Rudolph. Also delightful: any scene with Booster and Funches. In fact, the whole ensemble shares an instantly easygoing chemistry that any workplace comedy thrives on. As it turns out, Loot isn’t trying to be “any workplace comedy,” and that’s where it falters.

It mostly succeeds with the cast banter, unexpected friendships, and the whole colleagues-becoming-family (imagine that) vibe. The show would’ve worked fine with just all of that. But it also wants to embrace a larger message on how billionaires shouldn’t exist, and if they do, how they should actually help tackle global crises instead of simply tweeting through them. However, the writing doesn’t dig nearly deep enough into these timely themes. It’s relatively toothless and superficial, and the satire doesn’t have any bite. Despite centering on Molly’s burgeoning love life and reconnecting with her family, the characterization still feels fragmented. It’s a good thing Sofia, Nicholas, and the others surround her, but even their backstories aren’t fleshed out enough. Luckily, the cast holds its own and makes Loot an easy watch, with the season finale perfectly setting up what could potentially be a far more uncompromising future of the show.