film Good Luck to You, Leo Grande Has a “Magic Sex Worker” Problem

Critics are fawning over Good Luck to You, Leo Grande for its “brave” sex positivity. But the crowd-pleasing comedy is actually anxiously prescriptive, and it relies on an angelic and selfless sex worker to teach a middle-aged woman how to love her body. 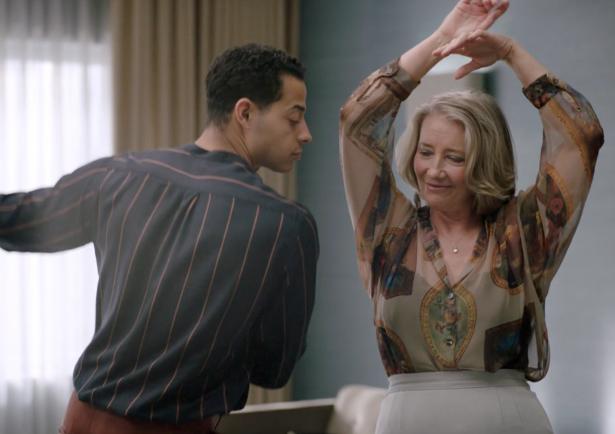 The reviews of Good Luck to You, Leo Grande practically write themselves. Based on a preview, or even a description, of the crowd-pleasing comedy that debuted to big cheers at the Sundance Film Festival and is now streaming on Hulu, you can generate something like this:

It’s a relief to see a film so frank about sex, and so open to sex’s complexities, especially when so much of current cinema is sexless to a disheartening degree. “Leo Grande” cares about sex for older women, and not just sex, but the baggage associated with sex, and how that baggage robs us of joy and fulfillment. Also revelatory is the film’s non-judgmental attitude towards sex work. . . . These are tough topics. “Leo Grande” has a light touch, and the dialogue is often hilarious, but depth is never sacrificed. There is a moment when Emma Thompson stares at her naked body in the mirror, probably for the first time. Physical nakedness is one thing. Emotional nakedness is another. “Good Luck to You, Leo Grande” has room for both.

But it’s so schematic that it’s unsettling. It’s not just that the majority of the reviews could’ve been produced by an automatic text generator. So could the script, after plugging in a series of topical terms like “sex positivity,” “unhealthy body image,” “middle-aged woman feeling invisible,” and “generational differences.”

Written by English comedian Katy Brand and directed by Australian filmmaker Sophie Hyde, this UK-based film is almost entirely staged inside an upscale hotel bedroom where the main characters repeatedly meet. It’s structured like one of those theater pieces designed to showcase two accomplished actors.

It’s not just that the majority of the reviews could’ve been produced by an automatic text generator. So could the script.

She’s got to play an extremely uptight, anxious, emotionally frozen person in order to provide the counterpart to McCormack’s Leo Grande, who’s an angel of sex. He’s a young man who’s literally unbelievable, he’s so handsome, so gym-toned, so physically at ease, so understanding, so sweetly appreciative of everyone else’s far-less-perfect bodies. He’s even got an adorable Irish accent. He’s the magic sex worker, and as he tells it, he’s so easy to turn on, he’s never once needed any Viagra or sildenafil equivalent in his career, not even with his oldest client, who’s eighty-two.

“You’re like some kind of a sex saint,” Nancy says to him at one point, presumably to relieve the strain on the audience of watching such an embarrassingly excessive fantasy scenario.

Of course, to balance her extraordinary nervousness and rigidity as opposed to his apparent openness and self-assurance at the beginning, there will have to be a shift midway through the film that flips the power dynamic and reveals he’s not entirely perfect. When Nancy is both mellowed and emboldened by her sexual experiences with Leo and begins to pursue greater knowledge of him personally — specifically about his background, family life, and estrangement from his mother — he shuts down and becomes anxiously self-protecting in turn. By the end, both have revealed their real names and fraught family situations, reaching a point of greater ease and understanding in life overall. Each has helped the other to a maddeningly equal degree. 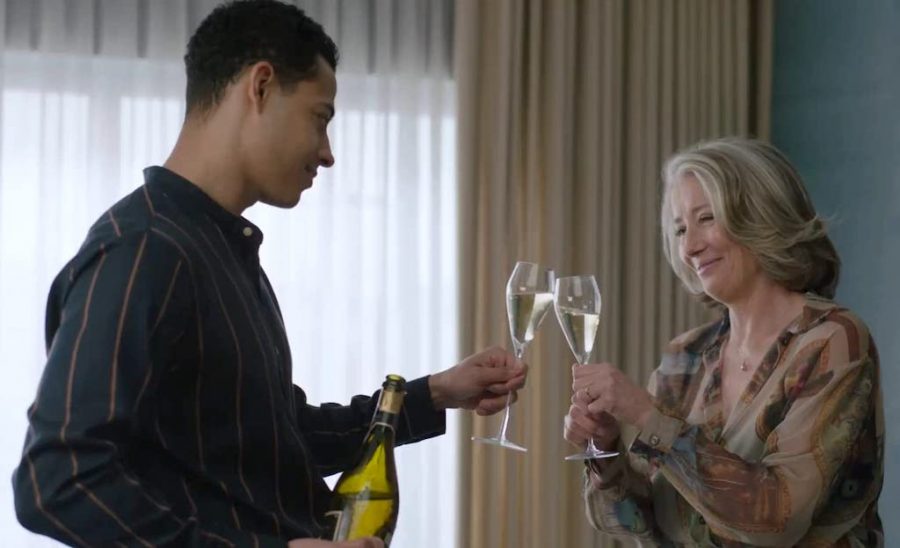 Still from Good Luck to You, Leo Grande.

But if you’re at all into noticing things beyond what’s being pointed at in the film, you can’t help but see that, in spite of the excellent efforts of the actors, these two people are rather thinly drawn, each with a few characteristics attached to them that can be wound up to make the plot go. Because Nancy’s had no erotic pleasure in her life, she’s been unable to connect with or really love anyone — husband, children, students — so all she needs is a few interludes with Leo Grande, the “menopause miracle,” as she calls him, and it’s indicated that all will be well.

As for Leo, he’s almost entirely defined by his openness to sexual experience, and all he needs to add is complete honesty about it. Because his mother caught him in the midst of sensual explorations with his friends at age fifteen, he was thrown out of the house and disowned. He reinvented himself, along with a cover story for his brother about being “an oil rig worker.”

He insists he’s not at all economically exploited and that he does sex work because he likes it. He’s clearly a person of color, but that’s never referred to in the film at all, a fact that earns the film one angry review, anyway, protesting:

This insistently happy hooker [story] and the question of invisible blackness. He happens to be black, but this is oddly never discussed or raised in their endless conversations. Would a clearly conservative woman show no surprise let alone curiosity, when a hired help of color knocks on her door in this racially polarized Western society today [?] . . . Did she request a black man from his agency [?] . . . These issues remain unanswered let alone unexplored, among many threadbare plot points.

But the focus of the film’s reception is almost entirely on Emma Thompson’s overcoming of her hatred of her own body in order to do the nude scene at the end. She’s making the press junket rounds, haranguing everyone in her bracing, aunt-like manner about the fact that it “was actually really brave of me”:

Probably the hardest thing that I’ve ever had to act is standing in a relaxed manner and looking at my body without judgment. You ask any woman to do that, I bet you 9.9 times out of 10, they won’t be able to do it. But do it on camera? Forget it. . . . We’ve been trained to hate our bodies from very early on because they don’t match the impossible and actually cruel ideals that we are presented with. . . . We’re not used to seeing bodies that haven’t been worked on to such an extent that they’ve become acceptable within the tiny, narrow limits of body perfection that we have been brainwashed into wanting, accepting, and receiving.

Again, this is all true enough. But the overall effect of Thompson’s stern lecturing — and the film’s way of presenting sexual experimentation for the middle-aged as requiring a smiling sex god of impossible perfection and endlessly patient effort — seems more inhibiting than anything.

The film presents sexual experimentation for the middle-aged as requiring a smiling sex god of impossible perfection and endlessly patient effort.

There’s a great counterpoint to this film — an episode of Absolutely Fabulous called “Sex” from 1995. The wonderfully scathing British comedy is insightful in its way of looking straight at aggressive human malefactions as well as endearing frailties without flinching. Celebrity-obsessed PR maven Edina “Eddie” Monsoon (Jennifer Saunders) has, like Nancy Stokes, never had a very satisfactory sex life. She was married twice and “was rarely troubled” with any great evidence of desire on the part of her husbands, one of whom eventually came out as gay.

She’s always suffered from an unfortunate body image, seeing herself as badly overweight, especially compared to her friend, London fashion magazine editor Patsy Stone (Joanna Lumley), who “hasn’t eaten since 1973.” Up till then, Patsy worked occasionally as a model in the stick-thin 1960s heyday of Twiggy and Jean Shrimpton, and even in middle age, she can rock skintight black leather pants and have frequent hot encounters with male models and other young showbiz types who have “buns so tight they’re bouncing off the walls.”

In order to help Edina experience greater sexual freedom, Patsy sets up a night for them with two male sex workers. But whereas Patsy is so sexually confident that she can reassure her partner, who’s new to sex work, with the line, “Don’t worry, you’re in very experienced hands,” Edina suffers torments of anxiety. She’s terribly worried about her weight and what she’s wearing, lest she appear unattractive, though at the same time, she doesn’t want to seem desperate. Like Nancy Stokes, she’s obsessed with what the sex worker’s assessment of her will be.

For Edina, the most embarrassing image in the film is the last one, showing her fast asleep on the floor in the middle of the action. But it’s wonderful, too, for the simple reason that it shows sex doesn’t always have to be such a big deal — having it and not having it. As Patsy tells her in a convincingly blasé, pressure-lowering refrain, “It’s just sex, Eddie.”

And though Leo Grande tries to say the same thing to the overanxious Nancy Stokes — it’s just sex, a totally ordinary activity — nothing about the film backs it up. The movie itself has a checklist that’s almost as anxiously prescriptive as Nancy’s list of sexual acts that must be performed during the session she’s paid for. One must learn to have a positive body image, and proper orgasms, and total self-honesty, and long, self-accepting looks at nude flesh in the mirror, and all the other for-your-own-good behaviors that make life a little less fun and a little more burdensome every day.