books The Fire She Fights

Women working in the blue-collar “nontraditional” occupations, traditionally occupied by men, have been writing about their experiences, contributing to our knowledge of “the hidden history of affirmative action.” Here is such a story. 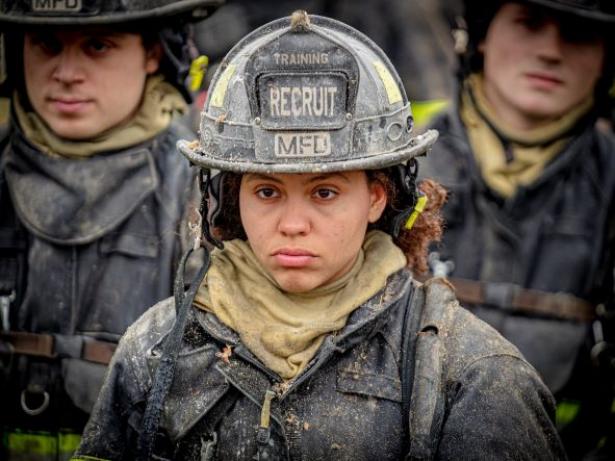 Considering how much time is spent at work, it’s interesting that there isn’t more fiction to capture these worlds. Yet when we encounter a gripping novel about the workplace, the characters stubbornly inhabit us and refuse to exit after we leave them behind. Some novels sear themselves and their characters into our consciousness. Consider Jimmy Breslin’s Table Money, his unforgettable 1986 novel about a sandhog and his family. Set in the early 70’s, it tells the story of Owney Morrison and his wife Dolores. Owney’s trips deep under the streets of New York introduce us to the cringe-inducing work of the men who are digging the new city water tunnel, and their forebears who carved out the tunnels and subways in our city. Another unforgettable novel about the world of construction workers, Richard Price’s Bloodbrothers, takes us on site with members of Local 3’s electricians. The story appeared in 1976, two years before the advent of women into Local 3. The female characters are all mothers, daughters, aunts, girlfriends, wives, waitresses, or whores—a sorry lot. In the book, as in life, fathers were eager to have their sons follow them into their craft. Women were for “after work.”

The Fire She Fights: A Novel

Now Tracy Moore’s novel, The Fire She Fights, takes us inside the firehouse, seen from the female vantage point. Like Breslin and Price, she has created an unforgettable portrait of life on the job, in a type of workplace that most of us know little about. One of the strengths of the book is how much we learn about the work, the routines that firefighters follow; the terminology and tools they use, the situations they face, the sacred rituals that constitute tradition, and the culture that prevailed in fire departments when women entered the fire service as peers.

Women working in the blue-collar “nontraditional” occupations, traditionally occupied by men, have been writing about their experiences, contributing to our knowledge of “the hidden history of affirmative action,” in the words of Nancy MacLean, and documenting the reality of what it was like to be a pioneer on the far frontier of feminism. What is still a far frontier, since statistics show that women still make up a small number of these jobs that opened up to allow for equal opportunity after passage of the Civil Rights Act of 1964. The few, the proud, the brave apply for and then make careers in these jobs, still contested after all these years.

The Fire She Fights weaves the workaday worlds of the four main characters together with their personal stories, their reasons for choosing to become a firefighter, the things they carry that weigh them down, and their responses to the antagonistic culture of the male firefighters and their stubborn resistance to the women’s very presence. She hits every note in the dramatic telling of the choices the women face—the Catch 22 scenarios they are up against—since to complain, or to file an official complaint, leads to the ouster of the harassed. The Fire Department of New York has its own harrowing history and stories reminiscent of those in this novel—so many come to mind—but the novel is all about the Minneapolis Fire Department, where the author spent more than twenty years as a firefighter and rose to the rank of Captain.

As Adrienne Rich wrote, “we dwelt in two worlds,” — the sons and the mothers and daughters—and so it is in this novel. While some of the harassment is of the typical garden variety related to sex, much of it is related to turf – to territory, to who belongs in these desirable, well-paid jobs, and who remains suspect. Despite the dangers and the difficulties, most firefighters express a love for their jobs—their calling. Women enter the service similarly looking for a way to be of service, to make a difference. Tracy Moore writes about the myriad ways this becomes so difficult in a captivating narrative that leaves us worrying about and wondering about the fates of the four heroines. Their engrossing stories keep us pinned to the pages, and the ups and downs, the trials, of the four main characters.

As Captain Brenda Berkman, NYFD (ret.) wrote: “Although Tracy Moore’s characters are fictional, firefighters and women in other nontraditional jobs will recognize both the challenges and the humor described in The Fire She Fights. An engaging, inspiring account of women firefighters, this novel is a must-read to understand what women experience in the fire service—and the courage required not only at fires but also in the firehouse.”

It is interesting that the union representing the firefighters in this novel never makes an appearance. It leaves the reader to wonder if the Minneapolis Fire Department’s union has a history similar to that of the union in New York City. That history was one wherein “the brotherhood” stood on the side of the brothers and the dues-paying sisters were forced to fend for themselves. The novel does include a women’s association where the female firefighters could bond, and find support. Like the women in New York City’s United Women Firefighters, the fictional women made common cause and set up a rigorous training program to help women prepare for the physical tests. Mentoring and motivational encouragement were part of the program.

The book concludes with a strong dose of reality. In an “author’s note,” Moore provides a look at the Minneapolis Fire Department and how well they are doing these days in regard to integrating their ranks. In our time of backlash against women and the current anxiety about reproductive rights, a novel about women who challenged the status quo and stood their ground, despite daunting obstacles, reminds us all of the world we imagined when the women’s movement was in full swing and “the world split open.”

[Reviewed by Jane LaTour, author of Sisters in the Brotherhoods: Working Women Organizing for Equality in New York City, which includes a chapter, “Double Vision: Breaking Down Doors at the Fire Department.” The aforementioned Captain Berkman’s photo graces the cover of Jane’s book. LaTour, former editor of Work History News, is working to complete her second book, an oral history about rank-and-file reformers — activists in the cause of union democracy.]