As a movement born in Uganda and Tanzania arrives in the United States, activists are drawing strength from lessons of earlier pipeline battles. 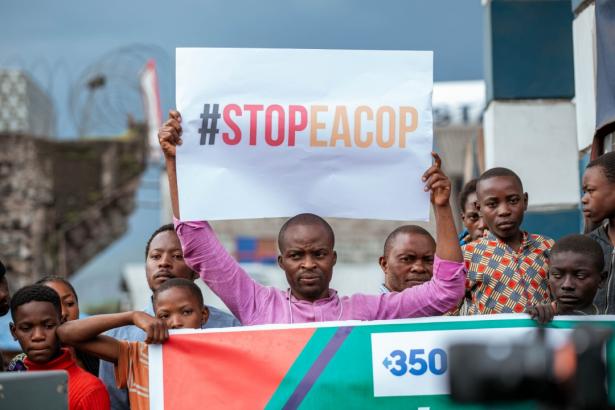 Grassroots organizers in Uganda and Tanzania have been speaking out against EACOP for years, sometimes at great risk to their own safety. But in a testament to the project’s significance for biodiversity and human rights, the campaign to stop the pipeline is now entering a new, increasingly global phase.

EACOP threatens to displace some 100,000 people whose homes lie in the pipeline’s path. It would cut through over 200 rivers and the basin of Lake Victoria, a source of irrigation and drinking water for 40 million people. It would also negatively impact numerous protected areas in Uganda and Tanzania, including national parks and wildlife reserves. However, it is the pipeline’s potential contribution to the climate crisis — 34 million tons of carbon emitted into the atmosphere annually — that has made stopping it a priority for climate activist groups not only in Africa, but in Europe and the United States.

“EACOP is a massive corporate project that is going to affect thousands of people,” said Baraka Lenga of Fridays for Future Tanzania, who has been spearheading opposition to the pipeline in his country. “We want to move from fossil fuels to green energy, and Total is trying to pull us back in the wrong direction. That is why you see the Global North and Global South united against this pipeline.”

The Africa Day protests were a sign of how opposition to EACOP has spread to span a continent. However, it may be just a taste of things to come as the movement to stop one of the largest proposed new fossil fuel projects in Africa continues to grow.

Roots of the EACOP resistance

The origins of the fight against EACOP date back to 2006, when U.K.-based Tullow Oil discovered an estimated 1.7 billion barrels of recoverable underground reserves in Uganda’s Albertine Graben Region. Over the next few years, as gasoline prices rose in many parts of the world, global oil giants began ramping up efforts to extract petroleum in places where it had once seemed too expensive or unfeasible to do so — such as the Canadian tar sands and further north in the Arctic. It was in this context that Total and other oil companies, which eventually bought out Tullow’s stake in the newly discovered oil fields, began planning to open East Africa to a huge expansion in oil drilling activity of which EACOP is a key part.

To climate activists in North America, this story might sound eerily familiar. Indeed, EACOP and the grassroots opposition to it call to mind the high-profile fight over the Keystone XL pipeline that raged for years in the U.S. and Canada. Like Keystone XL, EACOP would cut through two countries to transport oil to the international market. Both pipelines would displace landholders along their route, including Indigenous communities whose ancestors have co-existed with the landscape for millennia. And like Keystone XL, EACOP represents a crucial lynchpin in a larger plan to massively expand fossil fuel extraction in an ecologically sensitive region. 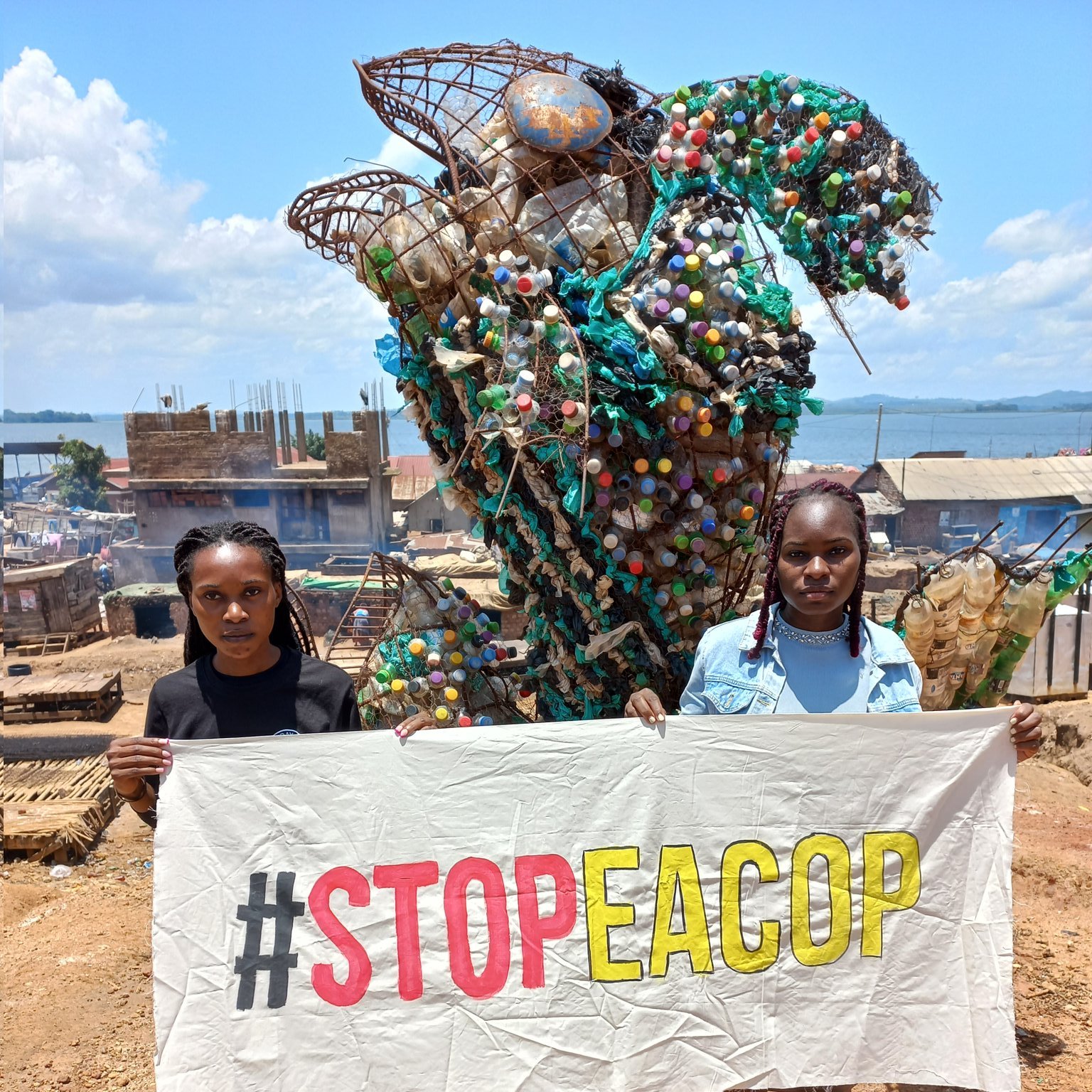 “Originally, most people joined the campaign to stop this pipeline because it is a threat to human rights, social justice and biodiversity,” Lenga said. “But for some of us who are concerned about climate justice, we got involved from the beginning because we knew this project would amplify the climate crisis.”

While the direct impacts from building EACOP would be felt mainly in East Africa, the companies attempting to build it are mostly based in other parts of the world. Total owns the largest stake in the project, with the China National Offshore Oil Corporation ranking as the second-biggest investor. Many of the banks and insurers most likely to underwrite the pipeline are based in Europe and the United States. And as the opposition to EACOP has grown, so has the climate movement’s focus on bringing the resistance campaign to countries that hold the keys to the project’s finances.

An international movement takes off

At Total’s annual shareholders meeting in Paris last month, close to 300 activists from Greenpeace France and other organizations blockaded doorways and rallied outside, until the company was forced to shut down the in-person meeting where it had been trying to impress investors. The aim of the protests was to pressure Total to end its involvement in major fossil fuel projects including EACOP, in solidarity with grassroots communities in East Africa. It was a sign of how climate groups’ opposition to the pipeline has gone global.

“The campaign against EACOP has just snowballed as more and more people have heard about the project,” said Ryan Brightwell, a Netherlands-based campaigner with BankTrack. “In 2018, when our organization first got involved, it was frustrating that there was very little international attention focused on the pipeline. That has changed, especially in France, where Total is based.”

A milestone for the campaign came in February of last year, when more than 250 organizations from around the world formally launched the International #StopEACOP coalition. In letters to the CEOs of the companies deemed most likely to fund the pipeline, the coalition pressed them not to lend it their support. To date, at least 20 banks and eight insurers — including Barclays, Citi, Wells Fargo, JPMorgan Chase, and Axa — have responded by committing not to fund EACOP directly. Partly as a result, the pipeline has suffered a seemingly interminable series of delays.

EACOP’s construction was originally slated to finish in 2020, but the timeline has been pushed back as the project struggles to secure necessary financing. “Back in 2018, they were looking to finalize funding by mid-2019 so construction could start soon after,” Brightwell explained. “Most recently, they’ve said they were going to finalize the loan by the end of this year. These delays give our campaign time to build momentum. Total is struggling to finance EACOP, but the next few months could be crucial. We can’t afford to take anything for granted.”

At least one major insurance broker, Marsh McLennan in the U.S., is still working with Total to try to obtain coverage for the pipeline — and it is this, more than anything else, that has caused the Stop EACOP movement to spread beyond Africa and Europe. In May, 350 U.S. officially launched a campaign pressuring Marsh McLennan to drop the project. It was the beginning of a new phase for the movement, focused on a corporate target based in the United States. 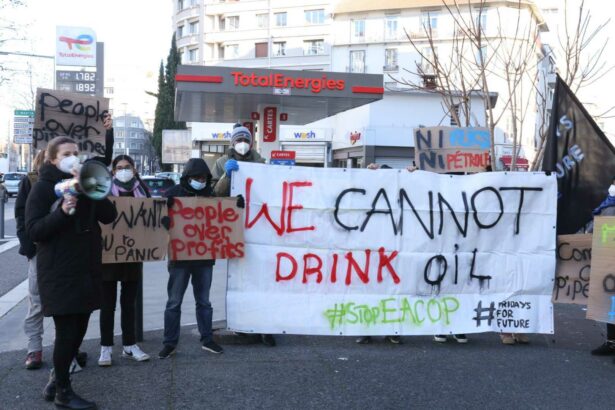 Fridays for Future activists activists in Grenoble, France protesting in front of a Total gas station in January. (Twitter/350)

The Stop EACOP movement is still young in the U.S., and so far climate groups there have emphasized using online activism to pressure Marsh McLennan and other companies involved with the pipeline. “There are lots of ways to have an impact,” Brightwell said. “For example, many pension funds in the U.S. are exposed to Total. Anyone who invests in them is also exposed to the risks of this project and its contribution to the climate crisis.”

As the movement escalates, U.S. climate activists will have an opportunity to draw on lessons from other pipeline fights. The successful campaign to stop Keystone XL, which the Biden administration rejected last year, may hold especially valuable takeaways. The first truly international campaign of such scale against an oil pipeline in North America, the Keystone XL fight, had its ups and downs. It included plenty of hard lessons about the challenges involved in harnessing the resources of large climate groups, while also elevating the voices of those most impacted by a fossil fuel expansion project. But at its best and most effective moments, the campaign provided U.S. and Canadian activists with a template for what successfully challenging an international oil pipeline can look like.

Tactics that played a major role in the Keystone XL fight included mass demonstrations targeting policymakers and the project’s financiers, direct action against the companies involved, and channeling resources to Indigenous-led groups on the frontlines of opposing tar sands extraction. Since then, U.S. and Canadian climate groups have applied similar approaches to push back against other pipelines. While some of these efforts proved more successful than others, all have helped build momentum for a truly international movement to challenge the oil industry. It remains to be seen how U.S. climate groups might harness some of the same tactics to challenge EACOP — a not merely international, but global fight.

There are already signs that solidarity between grassroots organizations in East Africa and large international organizations is proving effective. Climate and human rights groups have been able to focus global attention on organizers in Uganda and Tanzania who would otherwise be at greater risk of being targeted with violence for opposing the oil industry. “In Tanzania, many people are afraid to speak out against this project because they fear they will be arrested,” Lenga said. “But I know international organizations are going to stand with me.”

A new front against colonialism

Most of the non-African countries whose corporations are involved in EACOP, whether as owners or financiers, have long histories as colonizers or exploiters of sovereign countries on the African continent. Thus, for some opponents of EACOP, fighting back against this pipeline is a form of resistance to colonialism under yet another guise.

“It’s been more than 60 years since Uganda and Tanzania announced their independence,” said Omar Elmawi, an organizer for 350.org based in Nairobi, at an online kickoff event for the Stop EACOP campaign in the U.S. “These companies need to finally understand that these are free countries, and they should not be involved in exploiting their resources.”

Opposition from communities along the pipeline route continues to form the heart of the Stop EACOP movement. However, just as with the campaign against Keystone XL, an international activist response is necessary because the transnational corporations involved do not respect national boundaries. The main difference is that in the case of Keystone XL, most of the corporate players were based in either the U.S. or Canada. In EACOP’s case, they are scattered across at least four continents: Africa, Europe, Asia and North America. The campaign to stop EACOP therefore represents an almost unprecedented opportunity to build a truly worldwide movement focused on opposing a giant oil pipeline.

“It has been amazing collaborating with people all over Africa, in Europe, and around the world on this campaign,” Lenga said. “We in the affected countries are not asking for much. We just need support, because so long as we stay united, I’m sure we will win in this fight.”

Nick Engelfried is an environmental writer, educator, and activist living in the Pacific Northwest. He is currently working on a book about the youth climate movement.

Waging Nonviolence is a nonprofit media organization dedicated to providing original reporting and expert analysis of social movements around the world. With a commitment to accuracy, transparency and editorial independence, we examine today’s most crucial issues by shining a light on those who are organizing for just and peaceful solutions.

Waging Nonviolence is only able to produce unique, in-depth movement news and analysis with your financial support. Monthly donations help us plan for the future and develop strong relationships with the talented journalists and activists who write for us. Please make a tax-deductible donation today! We accept credit card, Paypal and direct bank payments.

To make a donation by check, send to:

For information on donating crytocurrency, hosting a Facebook fundraiser and setting up long-term giving, go to About > Ways To Give.  Waging Nonviolence is a nonprofit organization and donations are tax deductible (EIN 46-4615909).