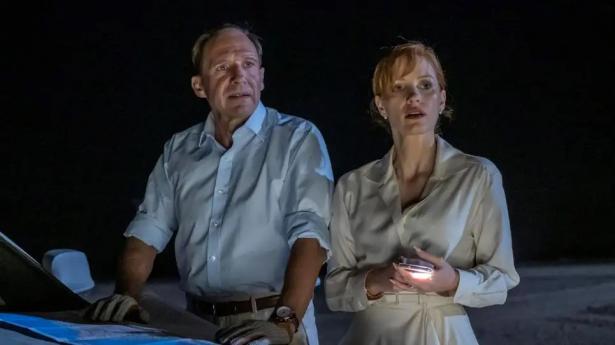 Moments of casual bigotry foreshadow the tragic event that kicks off The Forgiven: a bickering couple, driving into the desert for their friends’ party, hit a young fossil seller with their car, killing him. It’s an act of unintentional violence, but one colored by the inescapable facts that the couple are rich white tourists—he’s British and she’s American—while the victim is poor and Arab in the High Atlas Mountains of Morocco. Were it not for the driver’s earlier assertion that the locals “treat their women like donkeys,” we might write this off as a story simply about a car accident.

Writer-director John Michael McDonagh (of the hit 2011 film The Guard) knows we know better. That xenophobia continues well past the prologue, pervading The Forgiven like poisonous fumes, delivered by a murderer’s row of prejudiced snobs. A party guest wrinkles his nose at the sumptuous Moroccan dishes that servants set before him. One of the hosts brags about the “authentic” garb he’s designed for those servants. The phrase “ethnic pretense” is uttered. Discrimination, exoticization, willful ignorance, poorly disguised disdain for local customs—you name it, these vacationing Westerners have it.

It’s easy to see the death of a local African boy at the hands of wealthy white visitors as an extension of that xenophobia, a literal culture clash. Adapted from Lawrence Osborne’s 2012 novel of the same name, The Forgiven follows David and Jo Henninger (Ralph Fiennes and Jessica Chastain) on a weekend getaway to the desert villa of their eccentric friends Richard and Dally (Matt Smith and Caleb Landry Jones). Gossip about the fatal accident spreads quickly through the party—Jo blurts it out between gulps of wine—and soon it becomes clear their only recourse is David accompanying the dead boy’s father Abdellah Taheri (Ismael Kanater) to his village across the desert to pay his respects. David, who could barely muster a display of contrition for the police, would rather just pay in cash, and preferably not much.

But is there more to the couple’s story? David lets slip he did in fact know the victim’s name was Driss (Omar Ghazaoui), although no one knows another boy (Aissam Taamart) witnessed the incident on the dark road that night. As Jo recovers by indulging in cocktails and cocaine, drifting into the arms of facetious party guest Tom (Christopher Abbott), David begins an odyssey across the desert and into the depths of his own guilt. Does forgiveness await? Can the descendants of the oppressed absolve the oppressors? The story wanders around these questions; even Abdellah, hovering somewhere between vengeful menace and grief for his only son, doesn’t have a straightforward answer—that is, until the film’s impressively jarring final seconds. All that’s certain is his village will continue digging for fossils to sell to tourists, who will continue on to other exotic locales, and little about that is fair, and the world will keep on spinning.

As McDonagh chronicles that inequity, you get the sense that he too despises these characters—but loves his actors. In portraying the villainy of the haves with such nuance, the film risks oversimplifying the have nots. David is led on his journey of penance by Abdellah’s community of stoic Berbers, while those playing Richard’s enjoyably obnoxious guests are given satire, politics, and most of all, humor to work with. It’s almost a relief when, in the tense final act, Abdellah begins to uncork his true feelings, if only to see the terrific Kanater show his range. A story exploring white guilt and colonial suffering inherently caters to a white audience. Or at least, this one does; I don’t imagine North African Arabs would get much out of it, despite McDonagh throwing his non-white characters an ambiguous arc here or a cathartic moment there. Hamid (Mourad Zaoui), a butler who speaks in proverbs perfect for every occasion, has weird vibes opposite Jo, a welcome element of subtext back at the villa.

The film looks and sounds great, with cinematographer Larry Smith (Only God Forgives) capturing bright reds and blues amid the sweltering desert, and Lorne Balfe’s music immersing us in Northern Africa. As Jo, Chastain upholds her reputation as an actor with a firm hand on the intensity dial. The ability of the reigning Best Actress Oscar winner to turn the removal of sunglasses into edge-of-your-seat drama rarely disappoints. Fiennes has more opportunity for nuance, with David seeking to “cross the bridge and have done with things,” one of many lines that he says with a convincing spontaneity. He’s so convincingly loathsome from the first moment he sees the Moroccan shoreline that every sidelong glance hinting at an emerging conscience feels surprising yet earned; his first sign of fear, in a tense, lamplit scene opposite Kanater, brilliantly lays the groundwork for the denouement to come. And Abbott is a great fit for McDonagh’s palpable cynicism; there’s something appropriately off-putting about him, like everything Tom does hides his self-loathing.

Moviegoers who happen to be white Westerners may find themselves face-to-face with their own self-loathing thanks to The Forgiven—next time they’re abroad, they may hopefully be wary of exhibiting even a whiff of these monstrous characters’ colonialist mentality. But despite valiant efforts to avoid glamorizing the tourists he’s skewering, McDonagh doesn’t crack the code on extending the same level of empathy to his non-white characters, largely because they’re supporters rather than leads. A more successful juxtaposition would explore this incident’s ramifications for Abdellah as much as David. As a consequence, his film comes closer to embodying the tragic futility of two irreconcilable cultures attempting understanding, rather than properly deconstructing it.