The story is full of very relatable pandemic moments: workers questioning whether it’s safe to go to work or whether they should stay home, streets suddenly emptied, N-95 masks. What makes this all so remarkable is that it was published in 2018... 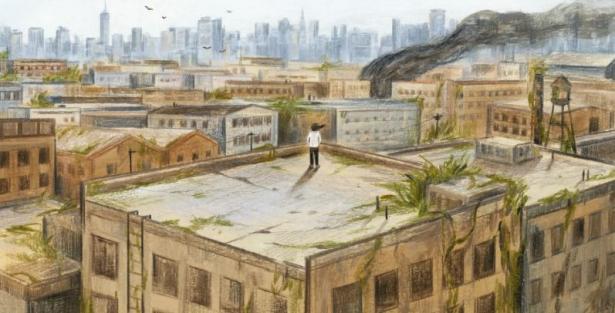 In her début novel, Ling Ma conjures an experience of the apocalypse through the lens of someone whose variegated identity is not an exotic distraction but part of the narrative architecture.,Illustration by Sally Deng/The New Yorker

The second thing you should know about Severance the book is that it’s pretty funny, pretty dark, has a really compelling main character, and is insanely prophetic for a story about the zombie apocalypse.

The book centers on Candace Chen, who was born in Fuzhou, China before immigrating to the United States at the age of six. The book alternates timelines, going back and forth between Candace’s immediate and distant past—growing up as an immigrant child with a politicized father and a stern mother or her more recent years as a wayward millennial hipster living with multiple roommates in Brooklyn—and her present, where she scrapes by on an Earth where 99% of the population has been wiped out.

Prior to the end of civilization, Candace spent her days working for a Manhattan publisher where she manages the production of Bibles in mainland China and their eventual shipment to and distribution throughout the United States. She is slowly coming to terms with the fact that she is definitely not living her best life when the once unthinkable happens: an airborne fungal pandemic originating in China—commonly referred to as Shen Fever in the book—spreads quickly around the world infecting everyone.

The disease has some undefined relationship to nostalgia and patterns of behavior. Almost every person who is infected is reduced to a near catatonic zombie-like state of repeating the same motions over and over—like watching television or setting the dining room table or trying on clothing—until they eventually die.

Candace is one of the rare 1% who seems to be immune to the fungus, eventually joining up with a band of other survivors who are slowly making their way West to a shopping mall—a very knowing homage to George Romero’s Dawn of the Dead, the 1978 anti-consumerism zombie masterpiece.

The story is full of very relatable pandemic moments: workers questioning whether it’s safe to go to work or whether they should stay home, streets suddenly emptied, N-95 masks. What makes this all so remarkable is that it was published in 2018, a fully two years before COVID upturned all of our lives in much the same way.

But that is not the reason to read Severance. What makes the story so enjoyable is the nuanced, dispassionate protagonist. Candace Chen is layered and has complicated relationships with everyone and everything: with her parents, her relatives, her coworkers, her ex-boyfriend, her fellow survivors, the United States and China, and even to capitalism and the role she is paid to play in the reproduction of inequality and injustice.

Severance makes good on the title as Candace negotiates a world in which she is cut off from her homeland, her native language, her passions and dreams, and eventually the majority of humanity. And yet, it’s the very lack of comfort, familiarity, and connection—of a home—that likely makes Candace immune to the virus. The themes in Severance are heavy, but Candace interjects enough levity through her dark humor and wit to not let the plot get too bogged down by the end of the world.

[Chris Brooks is a labor journalist and currently serves as the Field Director at the NewsGuild of New York. You can follow him on Twitter @chactivist.]