Three Georgia Starbucks stores have voted to unionize, and other efforts are afoot to organize lower-wage workers. 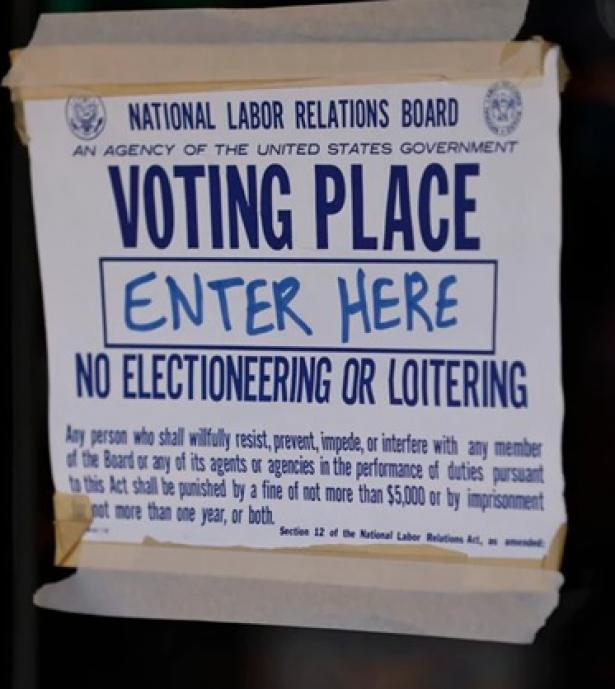 A union voting place sign is taped to the entrance of Starbuck at Ansley Mall where employees voted to unionize., Natrice Miller/natrice.miller@ajc.com

About a dozen customers were spread around the Ansley Mall Starbucks on a recent Friday, quietly working at tables or fiddling on their smartphones.

From behind the counter came the tapping of brewing tools, the crinkling of wrappers, a bean-grinder straining. Two baristas wore shirts with rainbows and the words, “So glad you’re here.”

The café felt laid-back, friendly, bright, welcoming and diverse. The only sign that this one was any different than 9,000 other Starbucks stores was a button, half-hidden in the folds on one barista’s apron.

The Ansley Mall store in mid-June became the third Starbucks in Georgia to vote for a union, part of what seems to be a low-key, yet undeniable ripple of union organizing. Between October and March, petitions to unionize jumped 57% nationally from a year earlier, according to the National Labor Relations Board.

Among the biggest targets in Georgia is a 5,500-worker Amazon warehouse in Gwinnett County, where organizing has just begun, said attorney James Fagan of Stanford Fagan, an Atlanta-based firm that represents several unions.

Farther along is Endurance Environmental Solutions in Norcross, which hauls waste to landfills, where a union vote among 60 workers is scheduled in the coming days, Fagan said. And late last year, employees of Liberty Tire Recycling in Atlanta voted to join the Teamsters.

President Joe Biden has made the NLRB more union-friendly, but that only matters once organizers petition for recognition. And in Georgia, the organizing effort appears focused on the retail and services industries. A national flight attendants union, meanwhile, is once again targeting Delta Air Lines, a coveted labor group that has been out of reach for decades.

Recent headline-grabbing economic development deals like the Rivian and Hyundai Motor Group electric vehicle plants are likely to create thousands of jobs and make for tempting prospects. But after decades of seeing new, non-union plants pop up, it’s unclear how successful a union pitch might be at those future factories.

In a state that has been historically non-union, the battle to organize in Georgia has often been uphill. And in a workforce of 5 million, most efforts may have a minimal impact.

Yet in recent months, there have been public signs of union activism: among low-wage marginal workers, long-time unionists pushing for better contracts and — most visibly — upstart efforts in high-profile, non-factory settings like Starbucks and Apple.

After all, the historically low unemployment rate during a time of economic growth has many employers desperate for workers, less able to dictate terms and pay, said Anthony Barilla, economist at Georgia Southern University, who has researched labor issues.

“There is a shortage of workers willing to work at the minimum wage or at a wage that simply doesn’t mesh with the area’s standard of living,” he said. “When labor deserves a higher wage, organizing is simply a tool to be used in accomplishing this.”

The tussle over organizing is a clash between competing notions about what it means to be an American worker.

Belonging to a union often means being locked into arrangements for working conditions, pay and benefits. It can mean waiting in line for promotions behind peers who may be less worthy, but have seniority.

“From the beginning, we’ve been clear in our belief that we are better together as partners, without a union between us, and that conviction has not changed,” said Starbucks spokesman Reggie Borges.

Still, unions are a given among many successful European companies. And union officials say organizing puts muscle behind a worker’s desire for higher pay and better treatment.

Certainly the historic trend is away from unions.

In the early 1950s, more than 30% of all workers were represented by unions, but that’s fallen to 11.6%, according to economist Barry Hirsch at Georgia State University’s Andrew Young School who co-authors UnionStats, a data site.

Unions for decades steadily lost ground in Georgia, a trajectory accelerated by the closing of many textile factories and the shutdown of two large auto plants. What remains are some blue-collar trades — electricians, plumbers — some scattered retail and the public sector, where unionization rates are nearly five times as high as among private companies.

Just 5.8% of the workforce in Georgia is now represented by a union, ranking 43rd among the states, according to the Bureau of Labor Statistics. But even here, there is more action than in years, Hirsch said.

“I just would not have predicted that Starbucks would be the focus,” he said.

‘The pandemic was a shift’

Pay isn’t the only motivating factor behind organizing efforts.

Many frontline workers who were praised early in the pandemic felt slighted later, said Erica Smiley, chief executive of Jobs With Justice and co-author of “The Future We Need: Organizing for a Better Democracy.”

“You called me essential, but if I’m essential, why am I not treated as essential? I think the pandemic was a shift. I think it radicalized a lot of people.”

While barista work may be stressful, the atmosphere is bright, the customers tend toward the white-collar and the work is typically done by younger, often well-educated workers who historically were immune to the lure of blue-collar unions.

Yet the campaign to unionize Starbucks has been one of the highest profile efforts, and the company has worked aggressively to head off organizing efforts. Nationally, more than 85 of the company’s 9,000 stores have voted for a union, including one in Augusta, another in Atlanta on Howell Mill Road and a third in Ansley Mall.

One of the nation’s best-known brands, Starbucks has tarnished its image with its full-throated rejection of its employees’ unionizing, said Dan Bowling, a labor lawyer now teaching at Duke University, who spent much of his career at Coca-Cola opposing unions.

“I find it ironic, but the organizations that had presented themselves as progressive, faced with an organizing campaign, hire high-priced legal and consulting talent to fight it,” he said.

Yet Starbucks’ very prominence has made organizing top-of-mind for millions of people who never would have thought much about unions, Bowling said. “With Starbucks, the publicity helps the union movement in general.”

After decades of public skepticism about unions, perceptions has shifted, he said.

“I absolutely think there’s a change in the air,” he said. “But will that result in a change on the ground?”

‘Not even remotely over’

Organizers in Georgia also are aiming at workers who are often less educated, blue-collar, immigrant and people of color.

People who clean homes or take care of disabled residents and have not seen the pay boost other workers have, said Jacklyn Izsraael, Georgia organizing director for the National Domestic Workers Alliance, which has about 1,400 members in the state.

Those workers typically make about $11 an hour and have never been unionized, she said.

Most are not eligible for unemployment benefits and have no healthcare, parental leave or paid time off, Izsraael said.

Charlotte Robertson has joined the alliance, having worked for more than decade as a full-time caregiver to a man disabled by a stroke.

She knows that the overall labor market has improved, that many companies are hiring, but she feels locked into the job by her age — 59 — as well as her own health challenges. She is also very fond of the client.

She lives with her sister, she said. “With her disability check and my job, together, we’re one person.”

Whatever the equation, it is hard work in Georgia trying to interest workers in a union, said Anastancia Cuna. An organizer who travels to job sites and talks to painters — many of them immigrants — about the added leverage workers have when they band together, Cuna said she is often met with skepticism and fear as she talks about the International Union of Painters and Allied Trades.

“A lot of people don’t know about unions and what they do know isn’t good,” said Cuna, who lives in Dacula.

She said she had been a nanny when she became pro-union. She realized how little leverage she had, caring for others’ children when her own daughter was in a day care center. She remembers being kept at work for unpaid overtime, then being fined $55 when she was late to pick up her child.

But organizing is an unpredictable, long and often bumpy road. A yes vote does not translate immediately to higher pay, better hours or to bargaining power. And many organizing efforts fall short.

Employees at the Apple store at Cumberland Mall, for example, had filed this spring for a union vote, only to withdraw the application, accusing the company of violating labor law, a charge the company denies.

At the OFS fiber optics plant in Norcross, workers and management have been in negotiations for a new pact for more than a month.

“A lot has changed since 2016 when we had our last contract negotiation,” said Brian Sawyer, an OFS production worker and member of the Communications Workers of America. “That is part of our message. The company needs to be reminded constantly.”

And while workers voted overwhelmingly for a union at the Starbucks on Howell Mill Road, that’s not the end of the story, said Page Smith, one of the organizers. Now, workers must form a committee and get the company to meet them at the negotiating table. The process can drag on for months before there is an agreement — if there ever is.

“This is not even remotely over,” she said.

Lowest share of workers covered by unions, by state

Number of workers covered by unions, by state

Workers covered by unions, by state

Michael E. Kanell, the AJC's economics writer, has been reporting on jobs, housing and the economy at the AJC for nearly two decades. He has appeared on television and radio to analyze and report on business and economic developments.