Gay rights, corporate scheming, and family drama make for a taut and densely plotted episode on For All Mankind 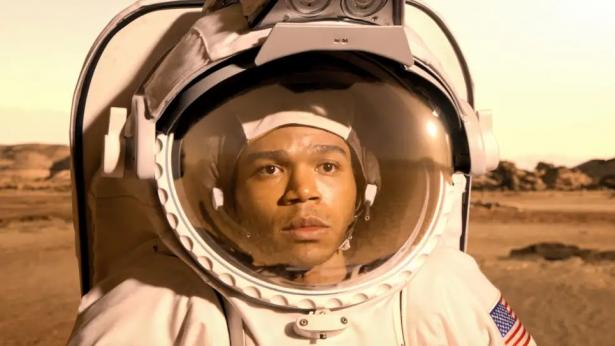 With a title like “New Eden,” you naturally wonder: Who’s the new serpent? More than halfway through For All Mankind’s third season, there are many. The betraying snake could be Will Tyler (Robert Bailey Jr.), the NASA astronaut who outs himself as gay without first running it up the chain of command. Or it could be reptilian Danny (Casey W. Johnson), losing his mind to jealousy and (now) painkillers. Another solid candidate for slithery villain are the Soviet cosmonauts, always ready to undermine their American colleagues/saviors.

It remains to be seen if humans will suffer an Edenic fall and be cast out of this Martian paradise, but so many factors could contribute to catastrophic failure. Danielle (Krys Marshall) is trying to keep her blended NASA/Roscosmos crew together, despite the pressures of Will’s bombshell and Soviets going behind her back to form a deal with Ed (Joel Kinnaman) and Helios to extract liquid water discovered under the soil. Back on Earth, Ellen Wilson (Jodi Balfour) is trying to contain the cultural upheaval Will’s coming out has caused by introducing a craven Don’t Ask, Don’t Tell–like policy (rolled out in our timeline by the Clinton Administration in 1993).

We may have sent explorers a hundred million miles away, but Earth problems still circumscribe their behavior. Homophobia doesn’t vanish when you sail past the Moon, and the human urge to be first can ruin true joy. Look at Ed and Danny when they finally land on Mars to plant the Helios Aerospace flag. It’s almost comical. Danny gives Ed contemptuous side-eye through his helmet, still disgusted by Ed’s choice to abort the landing due to loss of GPS and low visibility. Ed frowns at the Helios flag as if to say, Big deal. You want to shake both of them and say, “Look around, you dummies! You’re on frigging Mars! Who cares if you weren’t first?!”

For that childlike awe, we turn to Will Tyler, who stares at the majestic russet landscape with a beatific grin. Our humans struggle between their selfish egos and their capacities for cosmic wonder. Ironically, Will is so inspired by the glory of Mars that he decides to liberate himself and reveal his sexuality. That idealistic act has direct, negative consequences: outrage from conservatives on Earth and, sadly, bigotry from former buddy Rolan Baranov (Alexander Sokovikov) who fears touching Will might give him HIV.

So much is at stake, such petty prejudices are absurd in contrast. Sojourner One damaged its engines irreparably when it made its semi-blind landing, so the NASA/Soviet crew will have to get a ride back from Ed and Phoenix. Phoenix needs to generate methane fuel from water and elements in the Martian atmosphere in order to make the return journey. In the meantime, Dani and crew set up base in Happy Valley, but their water supply is running low and thermal controls are broken, leading to a swampy, claustrophobic environment in the “hab.” Too many people are crammed into too small and hot a space. When Dani gathers the crew for an update on rationing water, Kuznetsov (Lev Gorn) bristles when she dares to give his crew orders. Coldly and with excessive politeness, Dani asks the Soviet commander to pass on orders to his crew. (He also doesn’t like it when Dani calls him “Kooz,” but I think it’s cute.)

Next, director Andrew Stanton’s aerial tracking shot transports us from Happy Valley over mountain ranges and gulches to Helios Base. “We were so close, Karen, so close.” That’s Ed’s video messaging Karen (Shantel VanSanten) back on Earth. Ed explains why he aborted the landing: He looked over at Danny and realized he couldn’t live with himself if anything happened to the kid, who’s like a son to Ed. The camera pulls back and, yes, there’s Danny still hacking into Ed’s d-mail. You might hope that Ed’s tenderness would soften Danny’s Oedipal rage. Instead, Danny feels infantilized by Ed’s fatherly feeling and perhaps burdened by guilt: It’s his fault they didn’t land on Mars first.

In the next scene, while drilling for water at Helios Base, Danny accidentally gets a tear in his glove from the drill. He gets the injury on his hand patched up and the doc prescribes painkillers (addiction alert!). When Ed enters to find out what happened, if Danny followed protocol with the drill, the kid snaps, “I know what the hell I’m doing. I don’t need you to fuckin’ look after me.” He grabs his pills and storms off.

Back on Earth, at NASA, Margo (Wrenn Schmidt) is video conferencing with General Bradford (John Marshall Jones), who figured heavily in season two. Without mentioning Sergei (Piotr Adamczyk) by name, she wants Bradford’s help to get his family out of Russia so he can defect and be a highly valuable asset to the Department of Defense. Bradford says he’ll run it up the flagpole. Margo wryly responds, “You’re sitting at the top of the flagpole.” Margo may have to get President Wilson involved. Margo is determined and has nerves of steel, but she could be opening herself up for a huge fall.

At NASA Mission Control, Aleida (Coral Peña) watches the Soviet officials from Roscosmos as they study the American technology and confer among themselves. She’s naturally suspicious and distrustful, having figured out that an American mole has been passing on design secrets. If Aleida finds out it was Margo, it will bring up decades of awkwardness and tension, both the debt Aleida owes Margo, but also her resentment that Margo turned her back on her as a child.

At Helios, Dev (Edi Gathegi) is fending off a hostile board that’s outraged he’s spending so much on Mars and neglecting other areas of Helios business. Karen comes to visit Dev—and exactly why soon becomes clear. Dev is despondent about not being first. The news cycle is dominated by coverage of the joint American-Russian base. “We failed, Karen,” Dev says. “We landed on Mars, but what’s everyone talking about today? Not us. We didn’t change anything. We lost.” Karen counters: “This isn’t over, not by a long shot.” She then reveals that Roscosmos chief Lenara Catiche (Vera Cherny) wants a meeting with Dev (alliances shifting!). Karen indicates she’s willing to come back to Helios with certain demands: more control, upgraded title of COO, actual office with walls, and her own fancy espresso machine (last item is implied).

Will’s spontaneous coming out while shooting footage for a news segment makes headlines around the world and sends Ellen and Larry (Nate Corddry) into a somber conference in the Oval Office. As a lesbian and a gay man who married out of convenience and went on to become the nation’s most powerful couple, they understand the perks of staying in the closet. But Will’s plaintive message that no one should have to hide their true self wrings tears from Ellen.

Everyone has secrets that could lead to danger—whether you keep lying or speak the truth. Kelly and Poletov (Paweł Szajda) are having a full-blown love affair that could be used against either of them. For a time, Ed has to conceal the Helios/Roscosmos water project from his daughter. Danny is drowning in lies and deception. Margo is sitting on a treasonous past that could land her in federal prison.

Dani is one of the few characters who tells the truth. In her showdown with Will, she tries to balance sympathy with his wanting to come out and the imperative of a cohesive crew. “What if this is our chance to plant a new Tree Of Knowledge?” Will asks, alluding to the episode title. “Who’s to say here, a hundred million miles from Earth, what’s a sin and what’s not?” But Dani points out that their mission is not about god, it’s about NASA. When Will tries to assert that Dani doesn’t know how he’s struggled with the prejudice of others, she points out that as a Black woman in the space program for 20 years, she’s always been aware of how she’s viewed. Will says that being gay is not the same as being Black; Dani agrees, saying it’s easier to hide.

It’s a well-written scene, exploring intersectionality between Black and gay identities in a subtle but still dramatic way. “Last time I checked, reconstructing the moral fabric of the universe was not our mission,” Dani says with growing exasperation. When Will pushes back on what we mean by survival, Dani blows up: “It means stop thinking about yourself and go fix the fucking thermal control units!” Personally, I like swearing Dani; if she has to keep crackin’ skulls to stay on track, so be it.

Given how high tensions are running (along with the thermostat), you’d think Dani would veto a vodka drinking party on Happy Valley Base. But Ed comes by with tech to correct the CO2 levels, as well as gourmet food supplies, courtesy of Helios. At NASA, Sergei smuggles a message to Margo to indicate that the Soviets have detected water on Mars, but they were holding out. This is the final straw for Aleida, who informs Dani of Soviet sneaky dealings. Dani gets the video message as Kuznetsov and Ed are pounding shots of vodka. She stares daggers at the Soviets and her former Jamestown roommate. When Rolan and Will explode at each other, and Kuznetsov sneers that Americans have no discipline, Dani reveals what she knows, and a big argument ensues.

Luckily, the only damage from the Happy Valley blowout are a bunch of hangovers. Back on Earth, in Washington D.C., Beltway insiders are starting to talk about President Ellen Wilson and Larry Wilson’s marriage. If that comes out, it will make Will Tyler look like peanuts.

Well-scripted by Stephanie Shannon, “New Eden” is taut and densely plotted, tracking how quickly the Mars mission is shifting from a race to be first into a race for survival. I graded it slightly lower than previous ones because of logical inconsistencies or unexplained plot elements (see below). Nationalism, personal grudges, and corporate greed are preventing total transparency, threatening to turn this New Eden into a Fresh Hell.