U.S. police departments spend tens of millions of dollars every year to manipulate the news, flooding the discourse with “copaganda.” These aggressive tactics give the public a distorted view of what public safety means, what threatens it, and how to solve it. 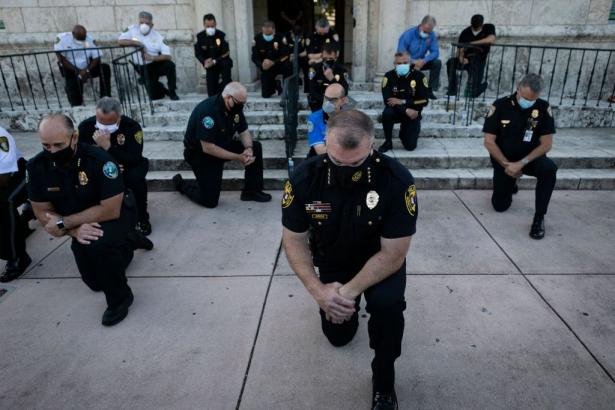 Police officers kneel during a rally in response to the killing of George Floyd, Coral Gables, Florida, May 30, 2020. ,(Eva Marie UZCATEGUI/AFP via Getty Images) The new issue of Jacobin is out now. Subscribe today and get a yearlong print and digital subscription. Abolish the Senate DANIEL LAZARE Workers in the Sky SARA NELSON Crypto Can’t Build a Better Internet FRASE

In May of this year, I testified at a hearing in San Francisco where city leaders questioned the police department’s funding and use of public relations professionals. That funding was heavier than you might expect.

According to police department documents provided to the County Board of Supervisors, budget items included a nine-person full-time team managed by a director of strategic communications who alone costs the city $289,423; an undisclosed number of cops paid part-time to do PR work on social media; a Community Engagement Unit tracking public opinion; officers who intervene with the families of victims of police violence and who are dispatched to the scenes of police violence to control initial media reaction; and a full-time videographer making PR videos about cops.

Why do police invest so much in manipulating our perceptions of what they do? I call this phenomenon “copaganda”: creating a gap between what police actually do and what people think they do.

Copaganda does three main things. First, it narrows our understanding of safety. Police get us to focus on crimes committed by the poorest, most vulnerable people in our society and not on bigger threats to our safety caused by people with wealth and power.

For example, wage theft by employers dwarfs all other property crime combined — from burglaries, to retail theft, to robberies — costing some $50 billion every year. Tax evasion steals about $1 trillion each year. There are hundreds of thousands of Clean Water Act violations each year, causing cancer, kidney failure, rotting teeth, and damage to the nervous system. Over 100,000 people in the United States die every year from air pollution, five times the number of all homicides.

But through the stories cops feed reporters, the public is encouraged to measure a city’s safety by whether it saw an annual increase or decrease of three homicides or fourteen robberies — rather than by how many people died from lack of access to health care, how many children suffered lead poisoning, how many families were rendered homeless by illegal eviction or foreclosure, or how many thousands of illegal assaults police committed.

The second function of copaganda is to manufacture crises or “crime surges.” For example, if you watch the news, you’ve probably been bombarded with stories about the rise of retail theft. Yet the actual data shows there has been no significant increase. Instead, corporate retailers, police, and PR firms fabricated talking points and fed them to the media. The same is true of what the FBI categorizes as “violent crime.” All told, major “index crimes” tracked by the FBI are at nearly forty-year lows.

The third and most pernicious function of copaganda is to manipulate our understanding of what solutions actually work to make us safer. A primary goal of copaganda is to convince the public to spend even more money on police and prisons. If safety is defined by street crime, and street crime is dangerously high, then funding the carceral state leaps out to many people as a natural solution.

The budgets of modern police departments are staggeringly high and ever increasing, with no parallel in history, producing incarceration rates unseen around the world. Police and their right-wing unions (which have their own PR budgets) want bigger budgets, more military-grade gear, more surveillance technology, and more overtime cash. Multibillion-dollar businesses have privatized nearly every element of these bureaucracies for profit, from the tasers and AI software sold to cops to the snacks sold at huge markups to supplement inadequate jail food. To obtain this level of spending, they need us to think that police and prisons make us safer.

The evidence shows otherwise. If police and prisons made us safe, we would have the safest society in world history — but the opposite is true. There is no link between more cops and decreased crime, even of the type that the police report. Instead, addressing the root causes of interpersonal harm like safe housing, health care, treatment, nutrition, pollution, and early-childhood education is the most effective way to enhance public safety. And addressing root causes of violence also prevents the other harms that flow from inequality, including millions of avoidable deaths.

The insistence that increased policing is the key to public safety is like climate science denial. Just like the oil companies, the police are running an expensive operation of mass communication to convince people of things that aren’t true. Thus, we are left with a great irony: even if what you most care about are the types of crimes reported by police, those crimes would be better reduced by making our society more equal than by spending on police and prisons.

Powerful actors in policing and media both manufacture crime waves and respond to them in ways that increase inequality and consolidate social control, even as they do little to actually stop crime. Copaganda not only diverts people from existential threats like imminent ecological collapse and rising fascism, but also boosts surveillance and repression that is used against social movements trying to solve those problems by creating more sustainable and equal social arrangements.

Hearings like the one I testified at in San Francisco are needed across the country. Local councilmembers should scrutinize the secretive world of police PR budgets, because the public deserves to know how police are spreading misinformation. It is possible to achieve real safety in our communities, but only if we end the copaganda standing in its way.

This story was supported by the journalism nonprofit the Economic Hardship Reporting Project.

Alec Karakatsanis is a civil rights lawyer and the founder of Civil Rights Corps. He is also the author of the book Usual Cruelty and a weekly newsletter called Alec's Copaganda Newsletter.