The Never-Ending War on the Woke

For my entire life, white moderates have been complaining about how difficult the people on the side of multiracial democracy are making it for them to win their idealized suburban voters. 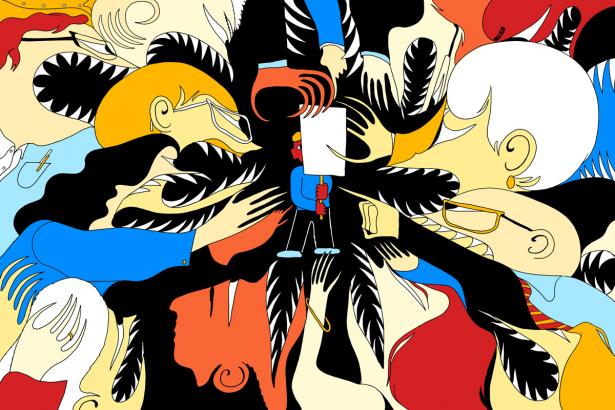 Accelerationism is the belief that things must get worse to get better—that reactionary forces must win political power to spur the development of a revolutionary spirit in the masses. Typically, it’s a tendency associated with the far left–diehard revolutionary factionalists who have mistaken schematic accounts of how history works for reality. It is blamed for all sorts of nasty outcomes, like people voting for Green Party presidential candidates rather than Democratic ones, without any concern for the damage George W. Bush or Donald Trump might do in office. What’s odd, having known plenty of Green voters and abstainers over the years, is how few proper accelerationists I’ve run into, and how rarely I’ve heard anyone explicitly make the case for it.

So I was a bit taken aback recently to see the argument made quite explicitly in a book about the 1990s. Not because the era itself seemed inhospitable to accelerationist ideas—it was, after all, the age of Adbusters and the WTO protests—but because of which side of the political spectrum was so openly espousing it. As you likely remember, Bill Clinton won the presidency in 1992, and then his Democratic Party lost control of Congress in 1994. Left Behind, a new book by the historian Lily Geismer (which I recently reviewed for The New Republic), revisits the New Democratic vanguard in and around the Clinton White House, and examines the broader forces behind that political movement. And in the middle of it, the reader learns that key Democratic Party strategists literally, on paper and everything, welcomed what came to be called the Republican Revolution.

“The 1994 elections have wiped the slate clean and liberated Democrats from special-interest liberalism,” Al From and Will Marshall wrote in 1995 to fellow members of the Democratic Leadership Council, the organization of centrist Democratic politicians and policy gurus that Clinton led prior to his presidency. From was one the DLC’s founders, and Marshall was (and is) the president of the Progressive Policy Institute, a stolidly centrist Democratic think tank. Both men were enormously influential members of the Democratic Party establishment, and both had the president’s ear. And both apparently celebrated an election that saw the end of a generation of Democratic control of the House of Representatives, because it would force their party to institute a purge.

The two were not just making the best of a bad situation. Indeed, they had plotted out the Democrats’ strategy over the 1994 midterm cycle. The key themes of From and Marshall’s analysis are likely to have a familiar ring for anyone monitoring the run-up to the pivotal 2022 midterms, most especially the tail-chasing lamentations voiced by centrist Democrats about the accursed spirit of wokeness and cancellation fatally weakening the party from within. In a May 1993 memo, Marshall, writing to From, frets that “placement of ‘PC’ activists in key policy positions” in Bill Clinton’s administration would “drive white moderates out of the party, not to mention alienating swing voters.” Clinton had famously promised to appoint an administration that “looked like America.” That in and of itself seemed to pose a problem to these two leading lights of the New Democrat movement. So they concluded that their president, and the Democratic Party at large, would be better off with a Republican Congress than a diverse cabinet and the inclusive thinking behind it.

So as another white Democratic president with a lengthy record of responsible moderation faces a daunting midterm election 28 years later, it is Groundhog Day in many heady reaches of Democratic strategy. In the nearly three decades that separate the public judgments of Joe Biden’s and Bill Clinton’s first terms, America has changed a great deal. The political advice of sensible moderates largely hasn’t.

“Wokeness is a problem and everyone knows it,” James Carville, the political strategist often credited with Clinton’s 1992 victory (and, let’s be honest, not much else), whinged to Vox last year, 100 days into Joe Biden’s presidency. “It’s hard to talk to anybody today—and I talk to lots of people in the Democratic Party—who doesn’t say this. But they don’t want to say it out loud.”

The statement is immediately self-contradictory, sure—it’s hard to talk to anyone who doesn’t say this, but not out loud? But it’s already setting the stage for a year of recriminations and preemptive blame-shifting for what is widely expected to be a midterm bloodbath for the ruling Democratic party. The political scientist Ruy Teixera—co-author of a best-selling Bush-era book on how demographic change would lead inexorably to permanent Democratic dominance—now peddles a newsletter where he moans about “the Democratic Left’s adamant refusal to base its political approach on the actually-existing opinions and values of actually-existing American voters,” as if “the Democratic Left” has been the determinant of what a government led by Joe Biden—again, that Joe Biden, the one who is president—has managed to accomplish, or not accomplish, over the last year.

In lengthy Twitter threads and ugly Substack newsletters, consultants and would-be consultants tell the gerontocratic and eternally triangulating leadership of the Democratic Party that the real problem is that the kids who work for them are too “woke.” Despite “everyone” knowing it’s a problem, “wokeness” is a poorly defined concept. “Woke” was once a Black slang term for being politically aware (specifically, being aware—sometimes in a comically exaggerated way—of the myriad methods the white establishment has of punishing politically active Black people). It now serves, in the popular political discourse, the exact same function as the term “PC” did for Marshall and From in 1993. “PC” stood for “political correctness,” which, after the fall of the Soviet Union and prior to 9/11, was, in the eyes of the white commentariat, the single greatest threat faced by the United States. (A few years ago Moira Weigel observed that the term “political correctness” hardly appeared in print at all prior to 1990. As she notes, in 1992, a database of U.S. magazine and newspaper articles turned up 2,800 references.) The point of each term, as deployed by these men, is to euphemize a euphemism: “special interests.”

“African Americans, women, white farmers, and, especially, organized labor,” is how Geismer describes the New Democrat conception of “special interests.” The big idea of the New Democrats was that denying all of these annoying groups any material gains would please the White Suburban Voter, who had emerged from all the social upheavals of 1960s and beyond as the Main Character of American Politics. What is remarkable, more than three decades later, is how little anyone has learned.

“WHAT THE WHITE HOUSE DOESN’T WANT YOU TO READ,” huffed a recent tantalizing subhead in Politico’s “West Wing Playbook” tipsheet. Was it some previously undisclosed intelligence operation? A newly declassified Kennedy assassination document? No. It was a Wall Street Journal op-ed by Republican Senator Mitt Romney calling on the White House to “ditch its woke advisers.”

“White House chief of staff RON KLAIN may have taken this a bit personally,” Playbook’s authors wrote. He “retweeted our own SAM STEIN, who quipped that White House deputy chief of staff BRUCE REED was the ‘embodiment of woke’ (Reed is objectively un-woke. In fact, the woke don’t like him).” I do not mean this as a cheap gotcha point, but all of the capitalized names in this dispatch are white men, and at no point do the keen analysts behind  Politico’s West Wing Playbook define what they think the term “woke” means.” At a certain point, though, you have to ask:. What does “wokeness” mean, to you, to Democratic centers of power and (last and probably least) to Politico?

The long-standing fight over who runs our nation’s left-of-center party has featured multiple linguistic evolutions but otherwise remained strikingly static. For my entire life, white moderates have been complaining about how difficult the people on the side of multiracial democracy are making it for them to win their idealized suburban voters.

I would ask Marshall and From—and Carville and Teixera and the heavy-breathing authors of Politico’s Playbook—only to acknowledge that they won. They got what they wanted. Barack Hussein Obama may have temporarily disrupted the natural order, but the “special interests” were routed, and the white suburban voter granted pride of place in the scrum for electoral power. Union membership is down to single-digits in the private-sector workforce. The communities of color that Clinton-era Democrats made such a performative point of rebuffing on the principle that they were securely captive constituencies have grown disenchanted, and in some cases started to edge rightward. The president’s approval among young people in particular is shockingly dismal.

Joe Biden is the president of the United States. Bill Clinton’s “PC” cabinet lost the 1994 midterms. Congratulations to the anti-PC brigade. You have gotten what you’ve wanted, over and over again, for many years. How’s it going?

Alex Pareene is a contributing editor to The New Republic and the author of The AP (Alex Pareene) Newsletter.

The Forum is a source of daily news and commentary deploying the insights of critical race theory, and supplying the materials and organizing strategies to re-envision American democracy from the ground up.