Four dissidents were barbarically executed, yet the international community, including the United States, continues a business-as-usual policy, maintaining diplomatic ties, allowing oil and other industries to continue in partnership with the regime. 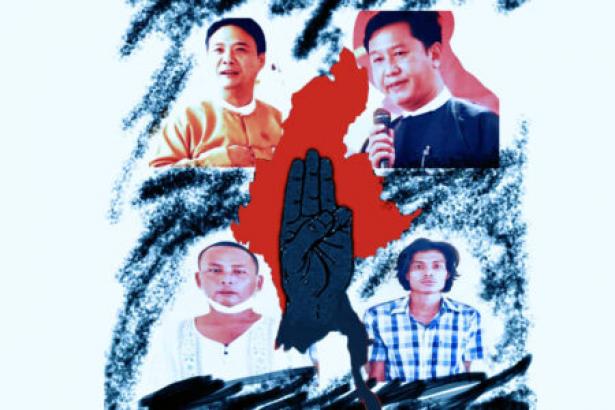 Human rights activists are sounding the alarm in Burma, where the military junta has executed four men imprisoned for their pro-democracy activism and opposing last year’s coup. It is the first series of reported executions in Burma in three decades. We speak to exiled Burmese dissident and human rights activist Maung Zarni, who says the international community should hold the Burmese regime accountable for its humanitarian crimes, especially in light of the overwhelming response to the Russian war in Ukraine. “This is a regime that has committed every single grave crime in international law that has ever been established and coded in the law books,” says Zarni.

We turn now to Burma, where there is growing outrage after the military junta executed four men Saturday who had been jailed for opposing last year’s military coup. In Burma’s largest city, Rangoon, protesters marched down the streets with a banner reading “We will never be frightened” and called out the names of the executed activists.

AMY GOODMAN: The execution of the four pro-democracy activists, who were sentenced to death in secretive trials, marks the first executions in Burma in over 30 years. Kyaw Min Yu was the prominent pro-democracy activist also known as Ko Jimmy. He was a student leader in the 1988 uprising, spent many years as a political prisoner. Also executed was Phyo Zeya Thaw, a former rapper who was a founding member of Generation Wave, an anti-military youth-led movement, and became a lawmaker in Aung San Suu Kyi’s party, the National League for Democracy. The two other men executed Saturday were were Hla Myo Aung and Aung Thura Zaw. The Assistance Association of Political Prisoners says they were involved in the resistance protest movement since the 2021 coup, like many other Burmese.

On Monday, the U.S. State Department spokesperson Ned Price responded to the executions.

NED PRICE: We underscore that with the escalating violence with these horrific atrocities that the junta has carried out, there can be no business as usual with this regime. We urge all countries to ban the sale of military equipment to Burma, to refrain from lending the regime any degree of international credibility. And we call on ASEAN to maintain its important precedent only allowing Burmese nonpolitical representation at regional events.

AMY GOODMAN: For more, we go to London to speak with Maung Zarni, exiled Burmese scholar, dissident and human rights activist, co-founder of the Forces of Renewal for Southeast Asia, or FORSEA.

Welcome back to Democracy Now!, Zarni. Our condolences to you and so many who knew one or more of the four people executed Saturday. Can you tell us who they were? And were you shocked by this act, the first time — the first execution of political prisoners in, what, some 30 years in Burma?

You know, two of the executed, I met them, and I consider them my younger comrades. You know, Jimmy, or Kyaw Min Yu, had been involved since 1988, when he was only 19 years old. And Zeya Thaw is in his mid-forties and a well-known hip-hop artist and a committed supporter of Aung San Suu Kyi’s leadership. And although we had differences of opinion about her leadership or NLD, but nonetheless, you know, I felt the pain.

Also, the other two were younger-generation comrade brothers. They were accused of killing someone who was credibly accused of being a informer for the military.

So, these are, you know, the four dissidents that were barbarically executed on Saturday. The families have not been given any indication in what manners they were executed, or, you know, not their — if they were cremated, not the ashes, right? So, the military is very afraid of these four becoming martyrs for the resistance and inspire new wave of resisters.

Was I shocked? No, not at all. You know, I think that, of course, like, these four young, or not so young, dissidents were executed, and so they had personal stories that we knew. So, it piqued the interest of the media and others. So, we are looking at, essentially, the genocidal regime, that is credibly accused of and that is facing a genocide case at the International Court of Justice. And so, just last Friday, as you know, the ICJ, the United Nations’ principal judicial organ, has ruled that the genocide case filed by Gambia against the state of Myanmar will proceed. And so, this is a regime that has committed every single grave crime in international law that has ever been established and coded in the law books.

And so, you know, I think we should realize that when the international community continues with a business-as-usual policy, including the United States, United Kingdom, U.K., Canada, the maintaining of high-level diplomatic ties, allowing oil and other natural resource extractive industries to continue to be in partnership with the regime, the regime is emboldened. So I would hold the international community accountable for its culpability, you know, despite all these empty condemnations from Ned Price or the congressional leaders and U.N. officials, human rights commissions, the European Union and whatnot.

JUAN GONZÁLEZ: Well, Maung Zarni, could you be more specific in terms of the contradiction between the words that are espoused by the U.S. government and other Western leaders and what their actual practice has been? Could you give us some specifics on that in terms of what companies and industries are still benefiting from economic ties and political ties with the Burmese junta?

MAUNG ZARNI: Yes. You know, all these high street fashion brands, Zara and others, and, you know, textile apparel industries, they are still producing and sourcing their materials in Burma, in a country that have zero or no labor rights protections, labor laws in place or enforced. You know, Chevron of the United States was grandfathered in when Unocal was swallowed up by California-based Chevron. It’s in partnership with the Burmese military, control the Myanmar gas and oil. And, you know, there are a long list of European, Japan, Australian, the Americans and even Canadian corporate interests operating on the ground, while the politicians and the foreign affairs or State Department officials come up with these grandiose condemnations, grandstanding that they are doing something moral, ethical, in principle.

If you compare the United States’ response to Vladimir Putin’s illegal and immoral invasion of Ukraine and the Biden’s response to the Burmese regime’s violations of all norms internationally and all the criminal and humanitarian law, you will see a black-and-white difference. You know, Biden has frozen $1 billion U.S. held in the U.S. accounts that belong to the people of Myanmar, the state of Myanmar. The military is widely domestically unaccepted and considered illegitimate. And even the Association of Southeast Asian Nations refuses to seat any political representative, let alone the chief of staff, Min Aung Hlaing, the head of the regime. And so, Biden poured like, you know, nearly $50 billion U.S. to defend Ukraine and support Ukrainian resistance. The Burmese resistance movement is selling — you know, engaging in bake sales and the concerts abroad to raise like peanuts, you know, several million dollars or $60,000, $50,000 U.S. to support their own resistance back home. Biden should be unfreezing their $1 billion U.S. and making it available to support the Burmese resistance.

Next up, we’re going to look at the Puerto Rico Status Act, a House bill that would allow residents of Puerto Rico to decide on the island’s territorial status. We’ll speak with the former mayor of San Juan. But as we go to break, this is “Sa Tin Chin,” which means “Beginning.” It was the title track to an album by the Burmese hip-hop group Acid, co-founded by the artist and pro-democracy activist-turned-legislator Phyo Zeya Thaw, who was executed Saturday by Burma’s military junta along with three others, prompting international outrage

Democracy Now! produces a daily, global, independent news hour hosted by award-winning journalists Amy Goodman and Juan González. Our reporting includes breaking daily news headlines and in-depth interviews with people on the front lines of the world’s most pressing issues. On Democracy Now!, you’ll hear a diversity of voices speaking for themselves, providing a unique and sometimes provocative perspective on global events.

This is viewer supported news. Please do your part today.  DONATE