Concerns that "other" groups were demographically outpacing white, Anglo-Saxon, Protestant women spurred efforts to limit the bodily autonomy of white women and limit access to contraception in order to force them to have children. 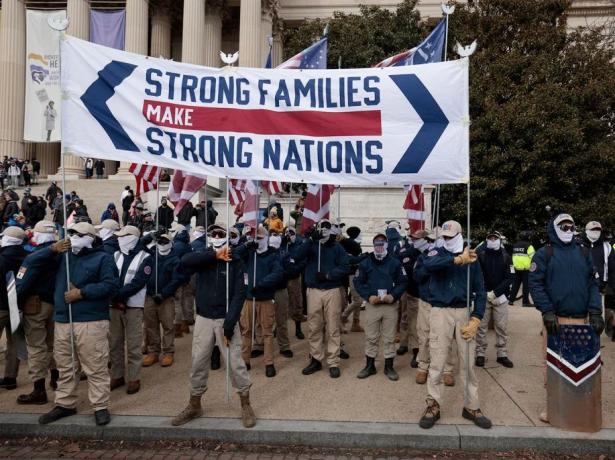 It may not be immediately obvious how the fight over abortion rights is tied to the “great replacement” theory — the debunked conspiracy theory promoted by some Republican politicians who claim that Democrats support more immigration to “replace” white American voters. But the explanation for, say, an alleged gaffe that overturning the constitutional right to an abortion is a “historic victory of white life” or a concern that not enough white babies are being born in the U.S. can be found in the history of the anti-abortion movement.

The movement to end legal abortion has a long, racist history, and like the great replacement theory, it has roots in a similar fear that white people are going to be outnumbered by people believed to hold a lower standing in society. Those anxieties used to be centered primarily around various groups of European immigrants and newly emancipated slaves, but now they’re focused on non-white Americans who, as a group, are on track to numerically outpace non-Hispanic white Americans by 2045, according to U.S. Census projections.

It’s been decades since the anti-abortion movement first gained traction — and the movement has changed in certain ways — but this fundamental fear has never left, as demonstrated by attacks on people of color, such as the shooter in Buffalo, New York, who expressed concern about the declining birth rates of white people. That’s because the anti-abortion movement, at its core, has always been about upholding white supremacy.

Throughout colonial America and into the 19th century, abortions were fairly common with the help of a midwife or other women and could be obtained until the point that you could feel movement inside, according to Lauren MacIvor Thompson, a historian of early-20th-century women’s rights and public health. Most abortions were induced through herbal or medicinal remedies and, like other medical interventions of the time, weren’t always effective or safe.

But the dynamics surrounding the procedure changed by the mid-19th century, as America’s elites began to fear a rising tide of immigrants from Ireland, Italy and other European countries (people often viewed as “inferior”), suffragists seeking new freedoms and recently freed Black people, whom these elites feared were reproducing at higher rates than the white population. Laws limiting abortion, it was believed, would ultimately force middle- and upper-class white women — who had the most access to detect and terminate unwanted pregnancies — to bear more white children.

“There were concerns that these other groups were demographically outpacing white, Anglo-Saxon, Protestant women. And so they thought to limit the bodily autonomy of white women and limit access to contraception in order to force them to have children. That they felt would keep up with the demographic birth rate,” said Alex DiBranco, the co-founder and executive director of the Institute for Research on Male Supremacism.

It took time for the anti-abortion movement to attract supporters, and unlike today, religious groups were not originally an active part of it. Still, momentum built as a small but influential number of physicians began arguing that licensed male doctors — as opposed to female midwives — should care for women throughout the reproductive cycle. In the late 1850s, one of the leaders of the nascent anti-abortion movement, a surgeon named Horatio Robinson Storer, began arguing that he didn’t want the medical profession to be associated with abortion. He was able to push the relatively new American Medical Association to support his cause, and soon they were working to delegitimize midwives and enforce abortion bans. In an 1865 essay issued by order of the AMA, Storer went so far as to say of white women that “upon their loins depends the future destiny of the nation.”

Declining white birth rates, along with the rising eugenics movement — a now-discredited pseudoscience focused on the genetic fitness of white Americans — were connected to the practice of abortion, and this helped bolster flawed, racist arguments for a total ban of the procedure. “The physicians trying to pass these anti-abortion laws were concerned about how abortion was a ‘danger’ to our society and the ways we want our country to be,” said Shannon Withycombe, a professor of history at the University of New Mexico who studies 19th-century women’s health.

Their tactics worked. By the 1900s, abortion was illegal in every U.S. state.

Despite this, though, women continued to seek abortions. It wasn’t until the 1960s and 1970s that women’s access to safe and legal abortions began to change. Feminist activists, armed with college and law-school degrees, began to advocate for overturning or relaxing these bans. They argued that the existing laws made abortion less safe for women and that reproductive health, including abortion, was necessary for women’s equality. Public attitudes started to shift then, too, and in 1967, Colorado became the first state to liberalize its abortion laws, allowing exceptions for the life or health of the pregnant person. Other states followed suit, and by 1972, a total of 13 had similar laws. Four states had repealed their anti-abortion laws entirely.

And, of course, in 1973, the Supreme Court ruled in Roe v. Wade that abortion was a constitutional right. But while the decision in Roe overturned the nation’s remaining abortion bans, it didn’t address the underlying forces that had helped establish them, which brings us to today, as the anti-abortion movement is once again front and center following the court’s decision to overturn Roe.

These old fears have risen to the fore again in part because the country is experiencing a demographic change similar to what we saw at the turn of the last century. For instance, the U.S. birth rate has been declining, although this has more to do with women having greater access to contraception, education and career opportunities than it has to do with abortion rates. But immigration levels are also high, almost as high as they were at the turn of the 20th century, again spawning a fear that white Americans will be displaced in an increasingly multiracial nation.

Polling suggests these fears have taken hold among the American electorate, too. In a December 2018 poll conducted by the Pew Research Center, a 38 percent plurality of Americans said the U.S. becoming more diverse would “weaken American customs and values.” This way of thinking is especially prevalent among Republicans, who said by 59 percent to 13 percent that having a majority nonwhite population would weaken rather than strengthen the U.S. (Twenty-seven percent said this would not have much impact either way.) According to a poll conducted by The Associated Press-NORC Center for Public Affairs Research in December, 47 percent of Republicans (compared with 22 percent of Democrats and 22 percent of independents) agreed with the statement that “there is a group of people in this country who are trying to replace native-born Americans with immigrants who agree with their political views.”

And these anxieties over immigration have become explicitly connected to the birth rate in some statements from prominent Republicans. In 2017, when he was representing Iowa’s 4th Congressional District in the U.S. House, Steve King directly made the connection: “You cannot rebuild your civilization with somebody else’s babies. You’ve got to keep your birth rate up, and that you need to teach your children your values.” More recently, in May, Matt Schlapp, the head of the Conservative Political Action Coalition, echoed a similar sentiment when he advocated for a ban on abortion. And in June, Illinois Rep. Mary Miller called the end of Roe a “historic victory for white life” at a rally with former President Donald Trump, who still holds a tight grip on the Republican Party and may run for president again. The crowd responded to Miller’s statement with applause, though her spokesperson later said she had misspoken and meant to say “victory for a right to life.” (Miller did not try to correct herself onstage, however.)

Moreover, other, more extreme far-right groups have visibly joined with the anti-abortion movement. This year, the white nationalist Patriot Front showed up at March for Life rallies in Chicago and Washington, D.C. “The white nationalist segment of anti-abortion organizing is really long-standing,” said DiBranco, of the Institute for Research on Male Supremacism. “And, in recent years, there’s been more of an emboldenment about using great replacement rhetoric or similar kind of rhetoric around to what they might call ‘white genocide’ or demographic change.”

Even on its own terms, though, the logic of tying the anti-abortion movement to the racist great replacement theory is deeply convoluted — and downright inaccurate. For instance, fewer women are seeking abortions, and women of color — particularly those who are Black — are more likely than white women to seek an abortion. Moreover, it’s likely that we’ll see more women of color die as abortions become more limited, in spite of arguments from some on the far right that a near-total abortion ban is a good thing for people of color, primarily Black people. In fact, according to analysis published in the December edition of the population-research journal “Demography,” a hypothetical total abortion ban would lead to more pregnancy-related deaths among non-Hispanic Black people than among any other racial group.

But logic is not the point in many of the mainstream racist arguments around restricting abortion access. “They tried to twist themselves into logical scientific explanations for all of these things. But they basically had to just make stuff up to justify what they wanted, which is for women — especially women of color — to not have any rights,” said Thompson, the historian.

According to Nicola Beisel, a professor emerita at Northwestern University who studies cultural sociology, sex and gender, women’s ability to have children is treated as a resource instead of a matter of bodily autonomy or a right, which is why opposing abortion is part of the bigger conversation about who is having children. “If women’s reproductive capacity is a resource, the question is, who’s going to get to use it? And for whom?”

This is why anti-abortion activists pressed until Roe was overturned, and they likely won’t stop there. It’s clear that the people who want to criminalize abortion also want to limit access to contraception, DiBranco said. “So it’s a part of a political project and a cultural project around controlling women’s autonomy, and in some cases, managing demographic change through that.”

Alex Samuels is a politics reporter at FiveThirtyEight.

Monica Potts is a senior politics reporter at FiveThirtyEight.

Values
The values we aspire to in our journalism …

Empiricism — We base our stories on evidence. We use many different kinds of evidence — data, reporting, first-hand experience, academic research, etc — but we also interrogate it for underlying biases.

Accuracy and completeness — Our primary standard is: “Is this accurate and does it present as complete a picture as possible?” and not some impossible “objectivity” or ideological centrism. We’re rigorous, and make every effort to test our hypotheses and assumptions. When the truth runs contrary to prevailing narratives we aren’t afraid to push back.

Transparency — We show — and share — our work. That means we explain how we reached our conclusions, and whenever possible, share the data behind our stories. It also means we acknowledge that we bring our own biases and perspectives to the work. The data does not speak for itself; we’re doing the speaking, and that requires us to think and work through how our own perspectives might influence our journalism and try to account for them.

Humility — Our understanding of the world is iterative. We aren’t afraid to say, “we don’t know,” or that our old analysis is now outdated, and with new evidence our argument has changed. When we’re wrong, we say we were wrong.

Personality — Our journalists can bring their whole selves to their work. We share who we are and let the personalities of our journalists shine through.