Post Protest, Government in Ecuador Strikes Out Against Indigenous Leaders

In the aftermath of Ecuador's longest-running national strike organized by Indigenous movements, activists now face a wave of criminalization. 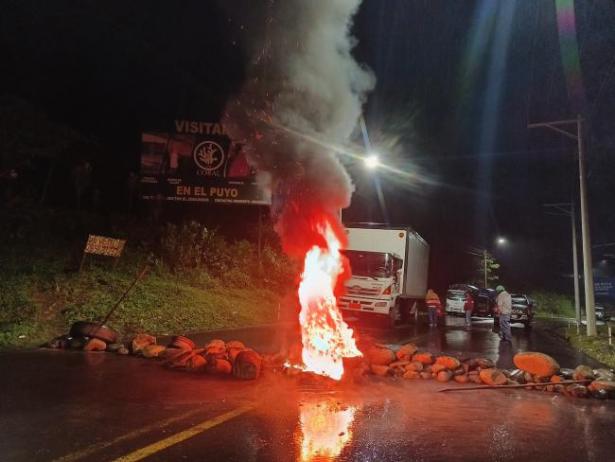 A blockade in Puyo, Ecuador, at the beginning of the 2022 national strike,(Joshua Holst)

On June 30, the conservative government of Guillermo Lasso sat down with the Confederation of Indigenous Nationalities (CONAIE) to end a national strike and begin a 90-day process of negotiations. No sooner was the peace accord signed than the Lasso government scaled up its campaign of repression against protesters, beginning with a new trial against CONAIE president and strike leader Leonidas Iza.

After a year of attempts at discussion with the Ecuadorian government, CONAIE took to the streets on June 13, locking down Ecuador’s major cities and petroleum wells with blockades. Since president Lasso’s 2021 election, IMF-mandated gasoline price increases, the expansion of petroleum activity into Indigenous territories, and deepening household debt has intensified livelihood insecurity for Indigenous nationalities and for the urban and rural poor.

The national strike has been a historic moment for Ecuador’s Indigenous movements, who in the face of intense repression and violence proved themselves a still powerful and effective force in Ecuadorian politics. After the country was brought to a standstill for 18 days, Lasso finally conceded to popular demands and sat down with CONAIE to initiate a negotiation process.

The Lasso government’s first act under the pretense of negotiation was to charge CONAIE president Iza with “illegal disruption of public services” for road blockages and interruption of petroleum production, an infraction under Article 346 of the penal code. The Regional Foundation for Human Rights Advisory (INREDH) reports 403 open cases against protesters as of July 6.

Iza’s trial and other violent attacks on the right to protest have defined Lasso’s strategy for the duration of the strike. One day into the protests, Lasso ordered Iza’s arrest without publicly stating the charges or where he was being held. A video of Iza’s arrest soon went viral, and he was released after public outcries denounced his capture as arbitrary and illegal.

During the ensuing strike, the government’s repressive measures progressed. Lasso declared a state of emergency in the first week, then expanded it to six provinces and authorized increasing and lethal use of force against protesters. These tactics resulted in six deaths, 335 injuries, and 155 detentions, the Alliance for Human Rights of Ecuador reports.

Although the court postponed the case against Iza until August, these investigations—along with repeated antagonistic media statement from Lasso and Interior Minister Patricio Carrillo—put into question the government’s motives and jeopardize the negotiation process. A good faith negotiation process is imperative not only for Lasso, who barely survived a recent no-confidence vote in the national assembly, but also for addressing the root causes of the strike.

Roots of the Strike

The Lasso administration’s failure to address a deepening political, economic, and security crisis is at the heart of the national strike.

The Covid-19 pandemic hit Ecuador hard. A month into the outbreak, Ecuador had one of the highest death tolls in the world, exposing serious problems in the country’s health infrastructure. The pandemic triggered a recession and impacted household incomes, leading to an increase in poverty, inequality, and unemployment.

Ecuador’s dependence on oil exports is another key factor. Oil is the main source of Ecuador’s revenue and a volatile commodity, rendering Ecuador’s economy vulnerable to fluctuating market values. Resource politics are a driving force in national and international policy-making in Ecuador, and increasingly have resulted in violent state-society clashes since the late 1990s. As a case in point, plummeting oil-prices in 2014, coupled with high debt, led former president Lenín Moreno to implement austerity measures that included the reduction of gas subsidies to meet IMF loan demands. The resulting backlash produced a surge of mass protests in Quito and other major cities in 2019 that prompted Moreno to declare a state of emergency. Moreno backtracked on scrapping fuel subsidies.

During the pandemic, oil-barrel prices plummeted to record lows, leading to the IMF’s approval on September 30, 2020 of a new $6.5 billion loan to Ecuador. On October 19, 2021, Lasso’s government renegotiated with the IMF to unlock $800 million in undisbursed payments through a new round of austerity measures that included the end of gas subsidies.

With the cost of gas for consumers rising, CONAIE organized protests that October. The public outcry prompted Lasso to institute gradual monthly gas price increases instead of a sudden removal of subsidies.

After his election, Lasso pledged to double oil and mining operations to eliminate fiscal deficit and address poverty. After a year in office, his government seemed poised to begin a new round of licensing to expand the mining industry and increase oil production from 500,000 to 550,000 barrels a day by the end of the year.

By June 2022, gas prices had doubled in Ecuador, driving up the cost of transport and all basic goods including staple foods in urban areas. For the poor, these price increases meant food insecurity. As of the strike’s start, the only campaign promise that Lasso had fulfilled was to speed up Covid-19 vaccinations.

In the face of economic pressures, plummeting popularity ratings, and a growing security crisis linked to narcotrafficking and escalating homicide rates, Lasso responded with quick and violent repression against protesters. Techniques of criminalization during and after these protests are a sign of Lasso’s efforts to reassert his weak hold on power. 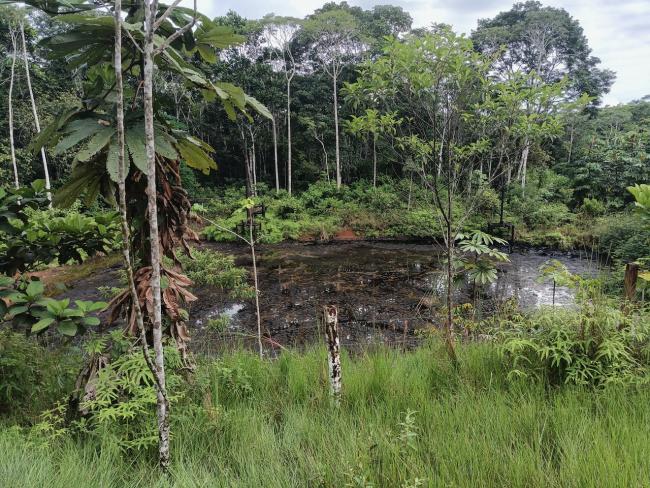 Institutionalizing the Criminalization of Protest

Lasso’s actions are nothing new. The criminalization of protest has long been a familiar tactic of Ecuadorian presidents, who—irrespective of left- or right-wing affiliations—follow similar patterns to justify repression against mass mobilizations and dissent.

Patterns of criminalization have been on the rise since the mid-2000s and are closely linked to the commodities boom that saw oil prices reach record highs. The state expanded the extractive frontier into large-scale mining and increased oil production to exploit this boom. In turn, affected groups organized resistance movements in response to ecological damage threatening health, food, and cultural survival. Successive governments have followed by institutionalizing the criminalization of protest through the use of courts and penal processes.

The three-term presidency of leftist leader Rafael Correa from 2007 to 2017 restricted the right to protest in multiple domains. Foremost, Correa’s administration increased persecution and judicialization of individual protesters through arbitrary arrests, detentions, and lengthy penal processes. Furthermore, he oversaw attacks on nongovernmental organizations, limited press freedom through the controversial 2013 Communications Law, and discredited activists as “terrorists” and “saboteurs.”

Indigenous and campesinos protesters have been primary targets. As the most directly affected populations, they challenged Correa’s policies to expand extractive industries and the promises of his Citizens' Revolution to end poverty through oil revenues. They questioned at what price and at whose expense, and they exposed the underlying contradictions of Ecuador becoming the first country in the world to grant nature constitutional rights, while at the same time expanding natural resource extraction.

Correa’s successor and former vice president, Lenín Moreno, continued these patterns to more deadly effect during the 2019 protests. Moreno’s administration oversaw the violent repression of demonstrators that resulted in 11 deaths, 1,228 detained, 1,507 injured, and over 400 criminal investigations.

After two decades, the legacy of criminalization is vast, familiar, and clear in purpose: to paralyze the work of activists and eliminate pathways of social dissidence.

Lasso: A New Imaginary of Criminality

While Lasso has shown himself no different than previous leaders, his actions also demonstrate the intractable nature of criminalization as a tool for governance. A case in point are attacks on the Indigenous guard and new discourses of criminality that link Indigenous protesters to narcotrafficking.

In 2018, the A'i Cofán community of Sinangoe brought a case against the Ecuadorian government to halt mining activities on their lands, spanning 15,000 square miles of rainforest near the border with Colombia. The government had granted 20 illegal large-scale mining concessions, with more pending, thereby infringing on Cofán rights under Ecuadorian and international law to free, prior, and informed consent for any resource policy decisions on ancestral lands. These concessions were discovered by the Indigenous guard, an institution created under Cofán law to provide for territorial monitoring and compliance.

In the landmark 2018 Sinangoe decision, Ecuador’s constitutional court sided with the community. The court nullified 52 mining concessions, halted mining operations, and affirmed the status of the Indigenous guard as a legitimate authority within their ancestral territories. For their efforts, guard leaders and case activists Alexandra Narváez and Alex Lucitante were awarded the prestigious Goldman Environmental Prize.

Despite constitutional recognition, Lasso and Interior Minister Carrillo repeatedly painted the Indigenous guard as violent criminals. In the opening days of the 90-day dialogue, Carrillo condemned the Indigenous guard in Ecuadorian media as an “armed group” and part of “urban guerrillas.” Furthermore, state rhetoric sought to connect Indigenous groups to narcotrafficking. In a July 7 interview, Lasso claimed drug traffickers working in coordination with former president Correa were financing protests to the amount of “15 million dollars for 18 days.”

Through its association of Indigenous movements and institutions like the Indigenous guard with narcotrafficking and urban guerillas, the Lasso administration expands Correa’s imaginary of criminality of Indigenous protesters from “terrorists” to “narcos.”

To insert Indigenous protest into this imaginary is problematic. One need only turn on any news source in Ecuador over the past few months prior to the protests to know the state of fear and anxiety the security crisis and rising homicide rates has produced in the Ecuadorian public. As an Alliance for Human Rights report denounced, these are stigmatizing discourses that “promote a message of hate, discrimination, and segregation,” exacerbate racism, and put the rights of Indigenous peoples, their lives, and practices at risk.

The first few weeks of the dialogue process have not looked optimistic, with Lasso’s government on the media offensive to link protesters to criminal elements and frame the strike in relation to the economic loss from blocked petroleum production. With 1,096 wells blockaded during the strike, and the Iza case as a precedent, Indigenous activists believe that the “paralyzation of services” pretext will be used extensively to target Indigenous leaders. "Ecuador’s petroleum production has halved… I think the government is going to focus on these cases," Andres Tapia, head of communication with the Confederation of Indigenous Nationalities of the Ecuadorian Amazon (CONFENIAE) said in an interview.

Moving in this direction contradicts the spirit of compromise in the peace accord agreement. In the agreement, the government conceded to a 15-cent reduction in combustibles and notably revoked Executive Decree 95, which would have expanded petroleum production.

During the strike, Lasso proved himself time and again as a bad-faith negotiator, fueling conflict with increased militarization and violence, organizing “shadow” negotiations with Indigenous leaders not affiliated with the strike, mobilizing misinformation campaigns, and calling in sick during negotiations on account of an alleged case of Covid-19. If Lasso persists in his use of the legal system and media to continually discredit and criminalize Indigenous protesters, it will undoubtedly have chilling effects on the dialogue process, raising the possibility of a new cycle of social unrest.

Angélica María Bernal teaches politics at the University of Massachusetts-Amherst. She is the author of  Beyond Origins (Oxford University Press, 2017) and editor of  De la Exclusión a la Participación (Abya Yala Press, 2000). She is currently working on a book on women’s resistance and extractive politics in Ecuador.

Joshua Holst is an applied visual anthropologist specializing in globalization and conflict. He has worked for NGOs and intergovernmental organizations in West Africa, Southeast Asia, and the Americas. For more information: www.rethinkpolitics.org/joshua-holst/

For over 50 years, NACLA has been a leading source of English-language news and analysis on Latin America. With your support, we pledge to continue our mission of hemispheric solidarity through original reporting and in-depth coverage of the region, on the web and in print. DONATE NOW!