Teachers and Port Workers Have Taken Over an Oakland School

Resisting the billionaire-ification of their city, workers and their families are offering a community-centered vision at Parker Elementary. And it’s working. 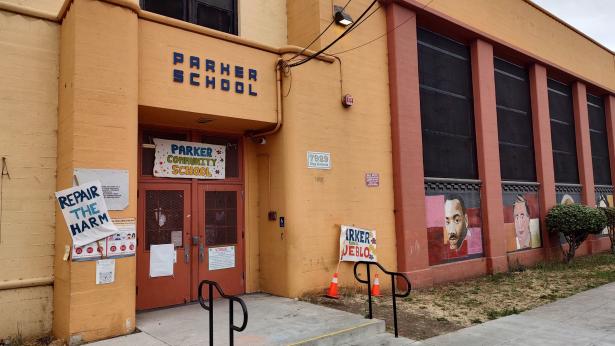 In what may at first seem an odd alliance, teachers and port workers in Oakland, California, have joined together to oppose charter school expansion and a new baseball stadium proposed by luxury real estate developers.

Forming a group called Schools and Labor Against Privatization, or SLAP, they began their campaign with a strike that shut down the city’s port and public schools for an entire day in April. In May, parents and teachers with SLAP took over Parker Elementary School in East Oakland, which was slated to close, and kept it running to provide services to students over the summer.

Oakland, like New Orleans, Denver, St. Louis, and other metropolitan centers, has long been a target of the charter school industry. “Oakland has been a veritable charter boomtown,” KQED reported in 2019. “There are now 45 charter schools attended by about 30 percent of the city's K-12 students, up from thirteen charters in 2003. Largely as a result, the district lost about 17,000 students in those 16 years.” Many Oakland schools have seen parts of their school buildings leased out to private charter operators.

As charters expand in Oakland, district administrators have been closing down public schools. The latest slate of closures will shutter seven schools, three of which serve as community schools that act as hubs for providing their families with nutritional, medical, dental, and mental health services. Some of the schools on the hit list have no nearby alternative public school.

Of course, there are nearby private charter schools. The cost of closing those schools and then of running schools further away from where students live is never addressed by the administration and closure supporters. They do talk a lot about what the saved money could be spent on, yet there is no provision to do so in their new school budget.

At the same time that Oakland public schools are increasingly threatened with closure and privatization, the city of Oakland is also considering a sweetheart real estate deal surrounding a sports stadium. A plan put forward by city officials would tear down the Oakland Coliseum—where the major league Oakland A’s are based—and replace it with a new stadium complex that includes high-end waterfront apartments. Dubbed the “Howard Terminal Ballpark,” it would be built over what is currently a functioning port facility.

Both the stadium deal and the public school closures center on John Fisher, a local billionaire and heir to the Gap Inc. fortune who chairs the board of the Knowledge Is Power Program, or KIPP, the largest network of brick-and-mortar charter schools in the country. He also owns the Oakland A’s, and has threatened to move the team if the stadium relocation plan falls through. Opposition to Fisher, who supports privatizing both the port and our schools, has played a significant role in SLAP’s formation.

Add this all up and one finds teachers, longshore workers and assorted pro-labor, pro-public school activists organizing together against privatization.

For two months, they continued to unofficially operate Parker Elementary School, which they refer to as “liberated.” Volunteers slept on campus and took shifts handling supervision and donation drop-offs. They offered their own summer community school program for students, complete with a graduation ceremony.

Then on August 4, security staff with Oakland Unified School District forcibly removed workers occupying Parker Elementary in an effort to retake the school that broke out in violence. Dozens more community members and at least five school board candidates turned out in opposition. One candidate, Max Orozco, told local news outlets he was handcuffed and beaten by district security, mentioning chest pain and showing TV cameras broken skin on his lip.

“I ask the city of Oakland and OUSD to investigate what happened to me and other members of the community and remove...all the people that allow and approved this attack on Parker community,” Orozco tells The Progressive.

The two unions representing both groups of workers (ILWU Local 10 and OEA) are not officially affiliated with SLAP, but many of their leaders are members. Though a district statement claimed officials had changed locks and set an alarm at Parker, SLAP members have remained both inside and outside of the school and plan to keep operations going.

“There is a long history of linking school privatization with other privatization, such as of port land,” says Divya Farias, a special education high school teacher and union member. “Activists have been working to bring the two issues, and the two unions, closer.”

VanCedric Williams, a school board trustee for the district where the port is located, was one of only two board members to vote against the school closures.

“It was hard to see that only two of us stood up to the district and the board,” he says, adding that he was glad to see the efforts at Parker.  “I had some good conversations with people who are very clear on the importance of Parker to the community and want to have input on what the school should be.”

Most of the port workers are Oakland residents, many of them parents to children in local public schools. The injury from school closures and loss of port jobs is felt across the city—but grassroots solidarity and direct action offers hope.

“School closures and port privatization are one and the same and speak to larger issues around privatization in Oakland,” says Hillary Chen, an Oakland teacher, local activist, and part of the community running Parker school. “People have a positive view of the ILWU and wanted to work with the longshoreman. There were already personal connections.”

Don Macleay is a long-time school volunteer and a community activist living in Oakland, California. In 2016 he was a candidate for the Oakland Unified School District board.

Since 1909, The Progressive has aimed to amplify voices of dissent and those under-represented in the mainstream, with a goal of championing grassroots progressive politics. Our bedrock values are nonviolence and freedom of speech.  Based in Madison, Wisconsin, we publish on national politics, culture, and events including U.S. foreign policy; we also focus on issues of particular importance to the heartland. Two flagship projects of The Progressive include Public School Shakedown, which covers efforts to resist the privatization of public education, and The Progressive Media Project, aiming to diversify our nation’s op-ed pages. We are a 501(c)(3) nonprofit organization.