At the dawn of the Great Depression, millions of workers were angry and didn’t see existing unions rising to the moment. They managed to build a fighting labor movement that transformed labor law and won the welfare state as we know it. 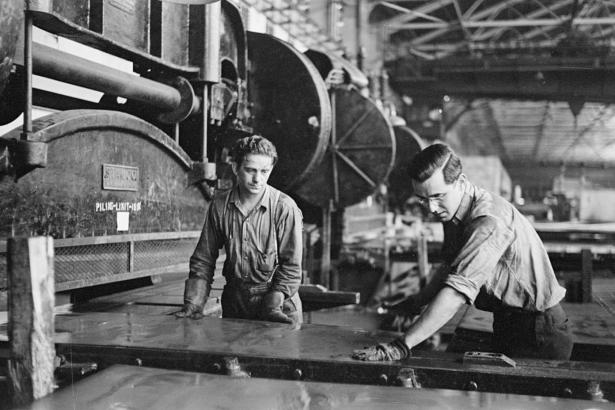 Review of History of the Labor Movement in the United States: The Great Depression 1929–1932  by Philip S. Foner (International Publishers, 2022)

In a period of extreme social and economic crises, when the major labor unions have reduced their organizing programs to a fraction of what they once were and the courts stand athwart any effort to protect workers’ interests, scrappy new independent unions raise hope against hope that maybe — just maybe — workers can fight back and win. I’m writing, of course, about the early 1930s. A newly published book finds some surprising parallels between that era and our own.

An eleventh volume in the prolific Marxist labor historian Philip S. Foner’s History of the Labor Movement in the United States has just been published, after it was discovered that Foner had completed the manuscript before he died in 1994. Subtitled The Great Depression 1929–1932, the book covers a period in which the established unions of the American Federation of Labor were not conducting many organizing campaigns or strikes and had little idea how to successfully contest for power in the large mass production industries that played a dominant role in American life.

As such, it’s really more of a history of the Trade Union Unity League (TUUL), the short-lived federation of independent labor unions sponsored by the Communist Party in the years before the emergence of the Congress of Industrial Organizations (CIO).

The TUUL has been maligned by many historians as a sectarian boondoggle that isolated the Communists from the early development of the CIO. Foner portrays the formation of the TUUL as a “necessary and unavoidable” response to the wholesale expulsion of Communist activists from the AFL’s mineworkers and garment workers unions as well as a sincere effort to organize new unions in industries that the AFL had no serious plans to take on.

Foner documents a revived Auto Workers Union, as well as a Steel and Metal Workers Industrial Union, that organized shop committees and published consciousness-raising shop papers during the long years that the AFL was still thinking of assembly line work as dozens of discrete crafts. Also chronicled are lesser-known unions like the Food Workers Industrial Union, which staged a strike in 1933 that successfully raised wages for 1,400 mostly black women who worked as nut pickers in St. Louis, and an Alabama Sharecroppers Union that defied violent racist repression.

Other heroic campaigns are highlighted, like the National Miners Union’s 1931 strike in “Bloody” Harlan County, Kentucky, which kicked off a decade-long struggle for union recognition, and Ben Gold and Fur Workers organizers facing down violent racketeers, gaining the loyalty of much of the rank and file, and leading eventually to collective bargaining and a CIO charter.

Foner was not particularly critical of the TUUL. He was a Communist, and in the last three volumes of his series, which coincide with the existence of the Communist Party, his analysis became much more partisan. That’s a shame, because it will cause some scholars and activists to continue to dismiss or ignore the lessons of this brief project of forming new, “pure,” left-wing unions outside the established labor movement. More recent scholarship has shown that the TUUL was more complicated, and more influential, than its critics have claimed.

Edward P. Johanningsmeier has shown that the shift from the 1920s strategy of “boring from within” the established unions (basically, the “rank-and-file strategy” of its day) to forming new unions was driven by organizers’ frustrations with the dirty tactics of trade union bureaucrats as much if not more than by “orders from Moscow.” Victor G. Devinatz has argued that the better measure of the TUUL’s legacy was not its membership numbers (which were pathetically low, perhaps never more than fifty thousand) but in the hundreds of thousands of workers who followed its leaders out on strike during these years, serving as a proving ground for organizers and giving workers some experience for the actual strike wave that would follow in 1934.

And Ahmed White has shown that former TUUL members, many of whom took jobs in the steel mills in order to organize a union, were the most dedicated activists during the long and sometimes violent SWOC organizing campaign at the “Little Steel” firms.

Foner’s is still, somehow, the first book-length treatment of the TUUL, and it’s well worth a read by activists who are currently, or thinking about, forming new independent unions. The surprise NLRB election victories of the Amazon Labor Union in Staten Island and the Trader Joe’s Union in Hadley, Massachusetts,  have provoked serious debate over the efficacy of organizing without the resources and expertise (and baggage and bureaucracy) of traditional labor unions.

My takeaway: it’s hard to blame workers for organizing independently of unions that won’t seriously commit resources to unionizing the industries they claim jurisdiction over. But most independent unions (historically speaking) have not amounted to much on their own. Where the TUUL unions were able to inspire workers to protest their working conditions, though, they left a road map of workplaces for the CIO to concentrate on a few years later. And where TUUL leaders inspired rank-and-file confidence in their strategies, they were sometimes able to negotiate their way into AFL and CIO unions to score the resources necessary to win when collective bargaining became legally protected.

A History of the History

It’s a strange delight to hold a “new” volume of Foner’s History of the Labor Movement in one’s hands, its cover the same red and blue gear, with the same typeface and International Publishers logo on the spine, three decades since the series was presumed to have ended with Foner’s life. (Amalgamated Transit Union organizing director Chris Townsend learned of its existence and fought for its publication, and SUNY Empire State College professor emeritus Roger Keeran got the manuscript into publishable form.)

A massive work across over four thousand pages, Foner published the first volume in 1947. He conceived the series as a Marxist rebuttal to the then-dominant Wisconsin school of labor history, which treated the broad sweep of labor’s story as an evolutionary process that resulted in the ideal policies and practices for unions: those of the American Federation of Labor in the 1920s (which, in retrospect, was a historical nadir of union membership, organizing activity, and political power for labor).

Foner’s approach was institutionalist (making heavy use of minutes and official journals to document organizations), but his focus was more on strikes and organizing campaigns, making the theme of his series the conflicts that are the whole point of having a labor movement.

The books are arranged thematically (earlier volumes include The Industrial Workers of the World 1905–1917 and The Policies and Practices of the American Federation of Labor 1900–1909) and chronologically, which I’ve found makes them a go-to reference when researching any particular event in order to get a sense of what else was going on in the labor movement at the time.

Foner’s choice to focus just on the first four years of the Great Depression is instructive. The historical memory of the New Deal tends to get smushed together, causing a lot of fuzzy thinking on the Left of the interplay between labor militancy and legal reform. In fact, radical changes were occurring on a year-to-year basis before Franklin D. Roosevelt even took office. (Rutgers labor studies professor Eric Blanc has been working through this in the series of working papers he put out this summer, “Labor Struggle from Below and Above: Lessons from the 1930s.”)

Aside from the TUUL, Foner highlights the unemployment demonstrations of the first years of the crisis and the AFL’s long, tortured internal disagreements about pushing for a system of unemployment insurance (which the federation had derided since the days of Samuel Gompers) as a “dole” that would make workers subservient to the government. As we have seen during our own COVID-19 crisis, workers are more likely to risk protesting on the job when they have some kind of safety net to fall back on.

The most important reform during these years was the anti-injunction Norris-LaGuardia Act, still the most important labor law in this country. Prior to the legislation, employers routinely made workers sign “yellow dog” contracts promising not to join a union. When unions went on strike, employers would go to federal court — yellow dog contracts in hand — and argue that the picket lines were interfering with their contract rights (as well as their property right to expect their employees to come to work every day). The courts would just as routinely issue injunctions, and the National Guard would violently shut the strikes down.

The Norris-LaGuardia Act made it the federal government’s stated policy to encourage the “full freedom of association, self-organization, and designation of representatives . . . free from the interference, restraint, or coercion of employers.” More practically, it outlawed yellow dog contracts and basically forbade federal courts from issuing injunctions that restrained workers’ strike and picket line activity.

That this great law was written by two Republicans (albeit liberal ones, when that was still a thing) and signed by a Republican president is illuminating. By the early 1930s, enough senators were so frustrated by the court’s pretzel logic on property rights, its conservative legislating from the bench, and its dithered views on Congress’s power to regulate interstate commerce that they actually voted down one of Herbert Hoover’s Supreme Court nominees and passed the Norris-LaGuardia Act by a veto-proof majority.

Would that we had enough senators of either party today who would vote to strengthen labor law as a “fuck you” to the Roberts Court.

Had Foner lived long enough to complete the History of the Labor Movement in the United States (a sisyphean task for any one scholar), the twelfth volume would probably have dealt with Roosevelt’s “first” New Deal, the industrial code-setting National Recovery Administration with its Section 7a “right” to organize — a gift lobbed toward a feeble labor movement to buy just a little opposition to a controversial bill — that, in turn, triggered the 1934 strike wave. And the thirteenth volume would likely have covered the advent of the National Labor Relations Board, the sit-down strikes, and the period that we tend to think of as “labor’s great upsurge” (and, again, tend to romantically misremember as occurring earlier in the New Deal timeline).

Perhaps now, a quarter of a century since Foner’s passing, the time is right for a new generation of scholars to pick up his mantle.

Shaun Richman is a former organizing director for the American Federation of Teachers.