Two more members of the Postal Service Board of Governors finish their terms in December. Biden could replace them with members willing to fire the postmaster general. 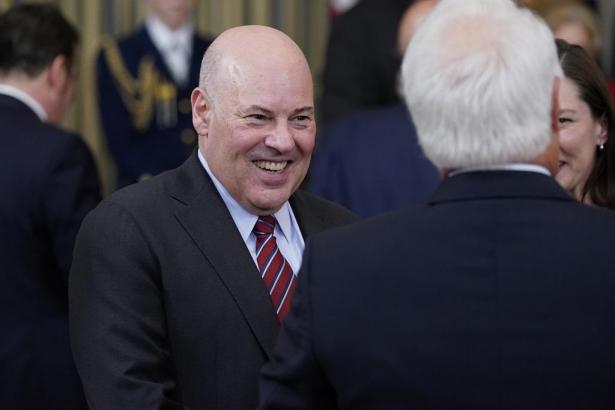 Perhaps no question inspires more frustration, anger, and genuine disbelief within the Democratic base than “Why is Louis DeJoy still running the U.S. Postal Service?” Postmaster General DeJoy, the former logistics CEO who was appointed during the Trump presidency, has long been criticized for a series of actions that have both degraded the quality of the venerable institution and raised costs. Yet he continues to serve and implement his agenda during Joe Biden’s presidency. Rank-and-file Democrats cannot seem to fathom this.

It is technically true that the decision on whether DeJoy retains his position is not up to the president. The Postal Service Board of Governors, a nine-member collection of directors, is responsible for hiring and firing the postmaster general. Last year, the administration expressed “concerns about the postmaster general’s leadership” and “serious issues with the job he’s doing running the Postal Service,” just two of a host of comments from administration officials about DeJoy. But at that time, press secretary Jen Psaki insisted that “it’s up to the board to make a determination about leadership.”

That was a bit disingenuous. Presidents nominate and the Senate confirms the board members. So there’s only one degree of separation between Biden and the end of the DeJoy era at USPS. The current composition of the board, which includes holdovers from the Trump years, maintains majority support for DeJoy. However, the terms for two DeJoy allies expire in December, and if Biden were to install replacements in those seats who wanted to see DeJoy removed, they would have enough support to do so, according to close observers.

Last week, 83 public-interest groups wrote to the president to ask him to find board members “who will hold the current Postmaster General Louis DeJoy accountable for his destructive leadership and advocate strongly for the expansion of USPS services.” The coalition, known as Save the Post Office, has secured a meeting with the Biden administration to discuss the board situation, the Prospect has learned.

Yet there is no guarantee that Biden will replace those members with DeJoy opponents, or even at all. Board members have the ability to hold their seats for up to a year even after their terms expire, and recent history has seen multiple vacancies on the board more often than not. With a scramble for floor time during the remainder of this Congress’s current term, dealing with postal governor positions may not be a priority item.

That would be a mistake, says Porter McConnell, co-founder of the Save the Post Office coalition. “I know the grassroots is still very pissed about DeJoy and doesn’t understand why he’s there,” McConnell said. “[The administration] could decide to take the political win. Or decline to do so for reasons unknown.”

A White House official said there were no personnel announcements to be made at this time.

THE MEMBERS WITH EXPIRING TERMS are William Zollars, a Republican, and Donald Lee Moak, a Democrat. Both were confirmed in June 2020 and both have terms that expire on December 8, 2022. Both Zollars and Moak have expressed support for DeJoy in the recent past. In February 2021, Zollars specifically said that DeJoy had “support on both sides of the aisle”; he was referring to both Moak and Ron Bloom, the former chair of the board, who was ousted in November of last year when his term expired.

Politically, there is probably no greater and easier victory for the White House than ending the service of Louis DeJoy.

Moak’s presence has been one reason why DeJoy has continued in his position, despite Biden having appointed a majority of the board and all of its other Democrats. Roman Martinez, a Republican, serves as board chair, despite the fact that Republicans only hold four of the board’s nine slots.

The Save the Post Office letter states that the current Board of Governors has failed to perform proper oversight while DeJoy has degraded the quality of the USPS. The coalition criticizes Biden’s November 2021 appointments, Republican Derek Kan and Democrat Dan Tangherlini, as having “close ties to the predatory private equity and real estate industries” and failing to show “a credible commitment to defending USPS or ousting DeJoy.” (Tangherlini was the chief operating officer of Artemis Real Estate Partners, a private equity real estate firm.)

Like many independent commissions and government boards, the Postal Service Board of Governors has a requirement that only a bare majority of its members, in this case five out of nine, be affiliated with the president’s own party. However, board member Amber McReynolds, whom Biden appointed in 2021, is a registered independent. Therefore, it’s technically possible for Biden to replace Moak and Zollars with Democrats who align with the vast majority of the Democratic base in opposing DeJoy. That would ensure enough votes to fire DeJoy, even if McReynolds or one of the previously serving Democrats (like Tangherlini) opposed it.

Critics of DeJoy say there’s ample reason for his removal. Under his leadership, the USPS has instituted a controversial ten-year plan that explicitly calls for longer delivery schedules, shorter hours at some postal facilities, consolidation of mail and package sorting facilities, and higher rates for some first-class mail. On-time delivery continues to lag behind the USPS’s self-imposed standards, and the next set of rate hikes are scheduled for January, even after DeJoy used his own authority on multiple occasions to raise prices.

A reform law passed this year that ended the prefunding of postal workers’ retirement benefits and moved retired employees onto Medicare more than halved the USPS’s long-term structural deficit. But DeJoy has stressed that the agency must break even by 2030, a goal he intends to achieve by reducing transportation and workforce costs, with the loss of 50,000 employees through attrition slated for the coming years.

Additionally, package revenue dropped in the latest quarter, a significant reversal from the growth it had seen in previous years. Critics see this as a sign of the USPS losing its reputation and loyalty under DeJoy.

“Basically, there’s no other place for [DeJoy’s reductions] to lead to than ultimately privatization,” said McConnell. “If you piss off enough customers, they’re going to leave.” She added that DeJoy sees the USPS as a business rather than a service, even as it continues to hold universal service obligations that are not profitable in nature. “You won’t be able to meet both masters over time,” she said.

McConnell and other critics have also savaged DeJoy for effectively sabotaging a postal banking pilot program that began last October. Since the launch, only seven people have used the pilot, which involves cashing checks onto reloadable gift cards with a $500 limit. (One of them was a Prospect staffer, who tested it out at launch.) The USPS has been criticized for failing to promote the pilot, which is limited to just four post offices nationally, and for charging high fees for the service. The Postal Service has defended the rollout as merely a change in the type of payment available for the existing line of gift cards.

“A poorly done pilot is maybe worse than no pilot,” said McConnell. “If you were into self-sabotage, that would be a very smart strategy.”

ONLY ONE OTHER BOARD POSITION, the Republican seat held by chair Martinez, will come available during President Biden’s first term. The coalition calls it “one of the last opportunities” Biden will have to signal a change in leadership at the USPS.

Moak and Zollars have the ability to stay on the board for a year after their expiration date. In addition, the December 8 end to their terms could give Congress little or no time in the lame-duck session to confirm nominees.

However, McConnell pointed out that last year, Biden announced nominees in November, before the December 8 end of the terms of the outgoing board members then. He could do the same here, readying nominees in September who could be confirmed in the lame-duck before this Congress ends. That would be critical, as it’s unclear who will control the Senate in the next Congress.

Politically, there is probably no greater and easier victory for the White House than ending the service of Louis DeJoy, for whom the president has never expressed support. It would continue the goodwill the president has gained with the party base over the past couple of months with a series of legislative victories. And with the Postal Service an important player in both election security and now reproductive rights, there is ample interest in having a postmaster general who puts the obligation for reliable service first.

“Now is the time for a Board that will invest in building the Postal Service of the future,” the letter concludes.