labor Gov. Newsom’s Choice: Back California Farm Workers or Help the Rich. Why Is This So Hard?

The bottom-line question is why so many highly profitable companies prefer to spend money to fight the unions instead of offering their vulnerable employees affordable health care coverage and safety from sexual assault. 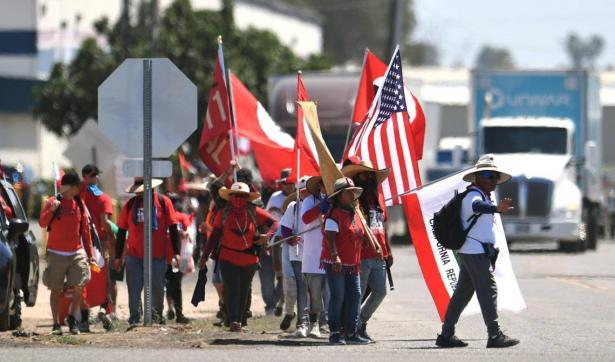 Marchers in the UFW’s March For The Governor’s Signature march south of Fresno, on Aug. 11,(Eric Paul Zamora)

Once again, farm workers are marching the 335 miles from Delano to Sacramento in triple-digit heat, this time hoping to get California Gov. Gavin Newsom to sign a bill that would make it easier for migrant workers to vote to unionize. That they even have to make this pilgrimage, in 2022 and in a Democratic stronghold, for rights that other workers have had for years, is not just wrong but embarrassing. Yet last year, Newsom vetoed a similar bill on account of its “various inconsistencies.”

In one of the spiciest columns I’ve ever read anywhere, The Bee’s Marcos Bretón responded by noting the internal consistency of the governor’s position: “The governor is, after all, the owner of a boutique winery. He is also the owner of a restaurant group, and in California, these industries are built on the backs of Mexican workers who are cheap, reliable, efficient and powerless. Newsom is rich; they are just Mexicans. The governor acted accordingly.” Newsom, whose almost 500 appointments as governor have left Latinos seriously underrepresented, hasn’t said what he’ll do this year.

But meanwhile, he still hasn’t given 89-year-old Dolores Huerta, who co-founded the National Farm Workers Association with César Chávez, the meeting she’s asked for. Sure, because what has the civil rights icon done in her nearly 90 years to rate that courtesy?

The most prominent of the “various inconsistencies” that I see in this situation is the chasm between the national progressive figure that our governor wants to be and the friend to his fellow 1 percenters that he was in vetoing last year’s bill. I joined the United Farm Workers on just a short stretch of their march into Fresno last week, and after maybe a mile in the late afternoon temperatures saw in a mirror at the Catholic church where we took a break that I had a face as heat-stroke red as the UFW t-shirts. People who work in this sun, and are willing to walk across the state to press the governor for his signature, obviously have fortitude to spare.

But they shouldn’t have to keep making this sacrificial trek. They keep us fed, working through every disaster from COVID-19 to wildfires. Even when toilet paper was hard to find at the height of the pandemic, vegetables weren’t, and why was that? That farm workers continue to be exploited in return, by major players in the world’s fifth-largest economy, ought to make passing and signing SB2183 a given.

Specifically, the legislation would let workers vote in union elections from the safety of their homes. Which would be a big-deal change because of the well-documented pattern of voter intimidation by growers. Right now, most such elections on whether or not to unionize are held on the property of employers. Pretending that’s fair is like holding a presidential election at Mar-a-Lago and calling that neutral ground.

The California Catholic Conference of bishops is strongly supporting the bill, which is hardly a surprise, given the long history of church support for workers’ rights. After all, marchers carry a flag bearing the likeness of the Virgin of Guadalupe at the front of the march, as they have for the 60 years since Chávez started talking about drawing the inspiration for his activism from Catholic social teaching.

Catholic Bishop Joseph V. Brennan greets UFW founder Cesar Chavez’ son Paul Chavez as the marchers in the UFW’s March For The Governor’s Signature rest from the heat in a Catholic Church on Aug. 11, south of Fresno.  Yet when I spoke to Bishop Joseph Brennan of Fresno, who joined the march at the church where we stopped, for the last leg of the day, he showed the same — in my charity, I’ll call it a lack of clarity — that the governor himself has exhibited.

On the one hand, Brennan said that Newsom should, after the bill passes, “sign it with all alacrity.” But he also said, “There are two sides to every story,” and that pushback “from some of my clergy, one in particular that I sat down with this week, gave me pause — made my decision to be here a little more difficult.”

Oh? This “beautiful priest,” who has a personal relationship with growers, Brennan said, told him that the stories of intimidation had been greatly exaggerated. “It gave me pause,” Brennan said again. “I need to do more homework.” And how did this meeting end? “It didn’t hurt either of our appetites,” at the meal they enjoyed afterwards, Brennan laughed. A meal enjoyed thanks to the farm workers, of course. Ideally, the time for Brennan’s homework would have been before the day of the test, but there’s no question that the intimidation reported by migrants is real.

“I can tell you, it’s brutal,” Huerta told me, with workers regularly threatened with violent retribution against their families back in Mexico or Central America if they are found to have supported organizing. Women are routinely threatened with rape, she said. “They say, ‘they’re going to find your body in a ditch.’’’

Lourdes Cardenas, center, leads the marchers between Parlier and Calwa during the UFW’s March For The Governor’s Signature segment on Aug. 11, south of Fresno. ERIC PAUL ZAMORA ezamora@fresnobee.com Santos Valenzuela and his daughter Rosario Valenzuela, who picked grapes for Giumarra Vineyards for years, told me about losing a coworker, Asuncion Valdivia, to heatstroke in 2004. “He was new,” said Rosario, “and was being pushed to work as fast as those who had been there for years. ‘You’re behind on your boxes!’ they said, so he wouldn’t even take the time to drink water.

Then after his death, the company was telling people to say that it was an accident, and things continued like nothing” had ever happened. But for workers on that crew, what had happened is that they then saw how important basic protections were. So the crew became heavily pro-union ahead of the 2005 vote on whether to organize.

Until the threats began, they said. You’ll lose your jobs if you vote yes, they were told, and “they’ll take almost half your check” in dues. It got so bad, Rosario said, that the company eventually hired her foreman’s daughter to join the crew. “Her only job was to bully me and want to fight me. It was a nightmare.”

Right before the election, Santos said, the holdouts were offered $300 to switch sides, and some of those who still wouldn’t cave got $500. So yes, the drive to unionize failed.

A year later, the foreman lost his job anyway, since despite his efforts to undermine the union, management still blamed him for having such a pro-UFW crew. Not long after that, Santos moved his family to Las Vegas,

where hard work paid better. Giumarra has always denied all wrongdoing, and said that the union and its supporters fabricate such stories in an attempt to gain support.

To me, the bottom-line question is why so many highly profitable companies prefer to spend money to fight the unions instead of offering their vulnerable employees affordable health care coverage and safety from sexual assault. 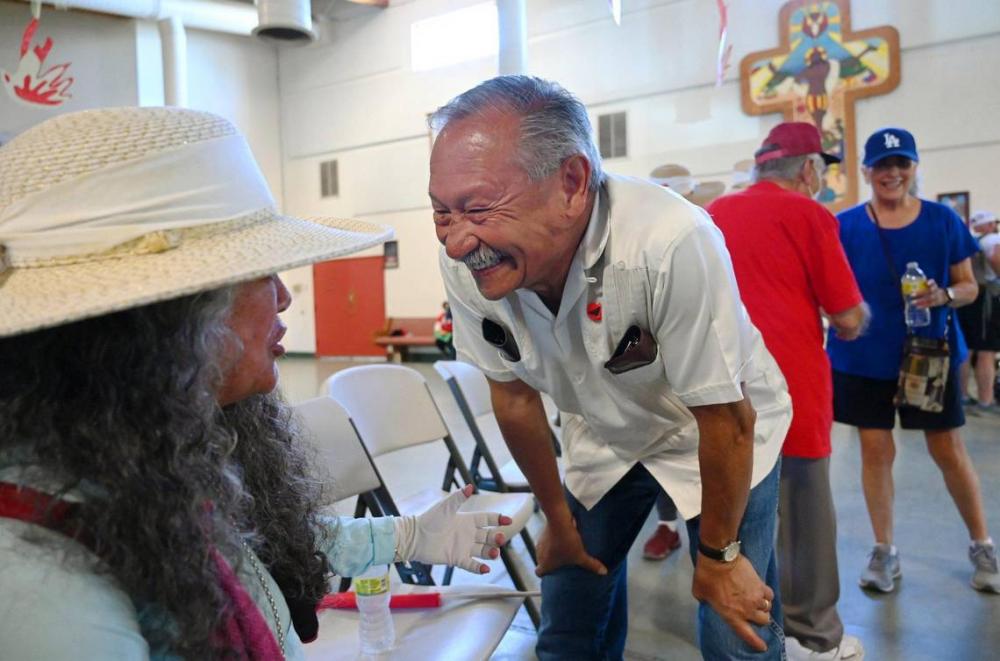 Former UFW President Arturo Rodriguez, center, smiles as he chats with current UFW President Teresa Romero, left, as the marchers in the UFW’s March For The Governor’s Signature gather for a break from the heat in a church in Calwa on Aug. 11.  (Eric Paul Zamora)

I asked Dolores Huerta, who said no bad word against Newsom, by the way, and here was her answer: “I’m going to tell you what César told me at his wife Helen’s kitchen table. He said if we don’t start the union, no one will, but we will never see a national union in our lifetime. We were in our 30s then, and I asked him why. He said because the growers are too rich, too powerful and too racist.”

Governor, if that reality offends you, it’s in your power to change it with your signature. And if it doesn’t, then maybe you should just keep on relaxing with your billionaire buddies and leave trolling the likes of Florida Gov. Ron DeSantis and Texas Gov. Greg Abbott to someone else.

Melinda Henneberger is The Sacramento Bee’s local columnist. She has covered crime, local and state government, hospitals, social services, prisons and national politics. For 10 years, she was a reporter for The New York Times in New York, Washington, D.C., and Rome. She won the Pulitzer Prize for commentary in 2022, was a Pulitzer finalist for commentary in 2021, for editorial writing in 2020 and for commentary in 2019.