The 1978 Abortion Trial That Foreshadowed Our Present-Day Dystopia

My sister represented Marla Pitchford, the first woman to be prosecuted for a self-induced abortion in the United States. With Roe overturned, her modern-day counterparts are facing an even worse reality. 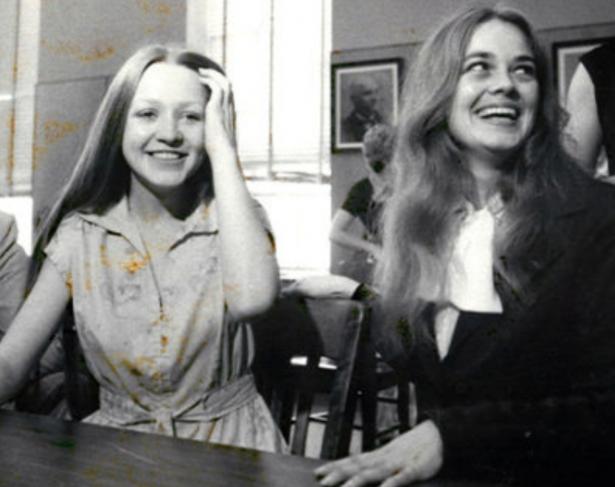 Marla Pitchford and her attorney, Flora Templeton Stuart, the author's sister, after her not-guilty verdict was announced.,

n 1978, just five years after the Supreme Court enshrined abortion rights in federal law, Roe v. Wade was put to a dramatic test. That was the year my sister, criminal defense attorney Flora Templeton Stuart, represented a young Kentucky woman in the first trial in the United States for self-induced abortion.

Engaged to be married, Marla Pitchford discovered she was unexpectedly pregnant. When she told her fiancé, he insisted she get an abortion and drove her to clinics in Louisville, Kentucky and Nashville, Tennessee. Because she was twenty to twenty-four weeks pregnant, the clinics turned her down.

After a wild outburst and then abandonment by her fiancé, Pitchford grabbed the knitting needle from her sewing kit and plunged it into her body. A few days later, after she almost died of sepsis in a hospital, a nurse contacted the police. She was indicted for manslaughter and self-inducing an abortion after the first trimester.

Although she was found not guilty by reason of temporary insanity, Pitchford suffered greatly throughout the ordeal of a highly publicized trial shortly after moving out of town to start a new life. Without Roe v. Wade, Pitchford could have been convicted. Without Roe, the focus of her trial would not have been a young woman’s tragic situation, but the personhood of an unborn child.

I asked my sister what we could learn from the prosecution of Marla Pitchford today.

“Since the overturning of our constitutional right to have control over our [bodies] women like Marla will face the possibility of jail for an illegal abortion or be forced to raise a child they cannot afford or raise,” she said. “Marla’s case, while the first of its kind in 1978, will become the norm.”

Today, and especially over the past decade, hundreds of women have been arrested for fetus endangerment. These arrests took place not because more Americans disapproved of abortion, but because of the indefatigable work of a determined few—anti-abortion extremists.

Research conducted by the National Advocates for Pregnant Women (NAPW) documents the arrest and prosecution rate of pregnant and formerly pregnant women in the United States from 1973 to 2020. Typically, the women were charged with manslaughter and homicide for attempting to harm their fetuses.

As reported by NAPW director and reproductive rights lawyer Lynn Paltrow, 413 arrests of pregnant women took place between 1973 and 2005. The arrests stemmed from claims of fetal harm, whether by substance misuse or through some other form of high-risk behavior. From 2006 to 2020, NAPW tracked over 1,200 such arrests, an increase that was almost three-fold. Poor women, women of color, and women in rural areas were the usual targets of these arrests.

In cases of self-induced abortion, NAPW found that prosecutors have charged women under a variety of state laws, including manslaughter, fetal homicide, and homicide by child abuse. But in the past, NAPW lawyers were able to get most of these charges dismissed as they were out of compliance with state and federal law.

Now, the repeal of Roe v. Wade has not only allowed states to ban abortion altogether, but it gives them license to prosecute abortion seekers and providers—including those who have no choice but self-induce.

We have entered a new era of mass surveillance of pregnant people. A paradigm shift has taken place with the fetus—now redefined by the religious right as an “unborn child”—and even argued in some evangelical circles to have rights separate from those of the mother. The granting of constitutional rights to the “unborn,” as Paltrow asserts, will force women to forfeit theirs.

In states where abortion is banned, reproductive freedom is essentially dead. Criminalization extends not only to those who self-manage their abortions, but also to health care workers, clinical staff, and pharmacists who provide reproductive care. State authorities, including police, prosecutors, and child welfare workers, can now exercise unprecedented power over pregnant people.

But that’s not all: An especially worrisome legal development, if it is not overturned by the courts, is the offering of a bounty to private citizens who succeed in suing someone who has helped a person get an illegal abortion. Texas, Idaho, and Oklahoma provide this type of incentive.

Medication-induced abortion is an FDA-approved process that involves taking two different medicines to end a pregnancy: mifepristone and misoprostol. This method of abortion is effective during the first trimester of pregnancy. The availability of non-surgical abortion through these pills, which can be prescribed through telehealth or simply ordered online, has been a godsend for many. To help make this medication more readily available, President Joe Biden recently issued an executive order for support through the Department of Health and Human Services.

To the distress of anti-abortion activists, abortion by medication is the simplest and most common form of abortion today. Because so many reproductive health clinics such as Planned Parenthood have been forced to close, many people will be managing their abortions on their own.

Proposals to restrict this form of abortion are well underway. Some states, such as Wisconsin, have passed legislation to prohibit telehealth abortion. Others are now working to make it a crime for an out-of-state provider to offer medication abortion services outside of the state. Realistically, very few of the women who self-manage abortion in their own homes with medication shipped through the mail will be known to authorities. But if there is a resulting emergency medical outcome, the hospital (in a state in which the practice is illegal) can be expected to file a report with law enforcement.

The criminalization of pregnancy has, in short, become a frightening reality as ever-advancing punitive laws are passed across the country. From the case of Marla Pitchford up to present day, these arrests have gone from an anomaly to an almost standard practice.

Katherine van Wormer is a Professor Emerita of Social Work at University of Northern Iowa and the co-author of Women and the Criminal Justice System.