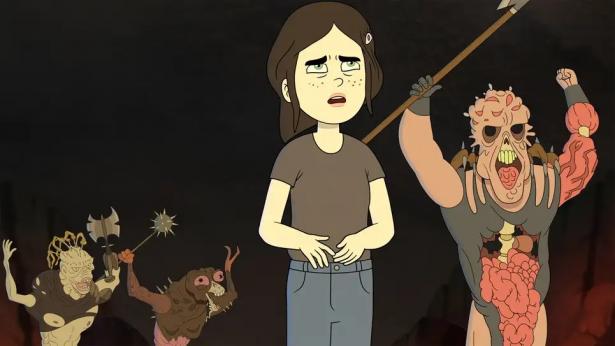 Vulgar adult cartoons aren’t exactly a novelty these days. Between Bojack Horseman and Big Mouth, cartoons—even those centered around kid characters—often cater to adult audiences through crude humor and mature themes. But FX’s Little Demon, which premiered on Thursday, still manages to deliver something new: a vulgar, adult cartoon comedy that feels specifically catered to women.

The show begins as Chrissy, voiced by Lucy DeVito, turns 13, gets her first period, and learns she’s Satan’s daughter—after her period quite literally opens a portal to hell. Satan, voiced by Lucy’s IRL father Danny DeVito, has spent years searching for Chrissy and her mom, Laura, a ripped, full-bushed, demon-slayer voiced by Aubrey Plaza. Now that he’s found them, the trio attempts to navigate normal, divorced-family life, all while Chrissy tries to get her demonic powers under control amid the usual torrent of middle school struggles.

Lucy DeVito told Jezebel that, from the get-go, she was excited to work on a “horror comedy” cartoon “from a woman’s lens.” She especially enjoyed bringing to life the “everyday horrors of womanhood,” starting with Chrissy’s first period. The moment it arrives, not only does it create a vortex to hell, it brutally obliterates two bullies in the middle school bathroom. DeVito said the first episode was meant to spoof both period stigma, and the dread of menstruation—something frequently downplayed by male writers, despite research that shows that, for some people, period cramps are as painful as a heart attack.

“Just from personal experience, I can’t speak for everyone, but my first period was horrific. Just very jarring,” DeVito said. “But there’s also humor along with it, like the kind of perils of growing up as a woman. You just wake up one day, there’s blood in your pants, and that’s really fucking scary.”

But despite all the gore and twisted, Satanic comedy that accompanies it, Chrissy’s first period and clumsy attempts to fit in reflect how Little Demon is very much a classic coming-of-age story. “Thirteen was rough for me, for a lot of people,” DeVito said.

Chrissy’s Satanic period and the (literal) hell it unleashes comprise just one of several critiques of patriarchy we see in Little Demon. Later on, Chrissy becomes obsessed with using her demonic abilities to possess people and animals to save their lives, resolve conflicts, and just have fun. Little Demon also manages to use this chaotic storyline as a launching point for a surprising and poignant conversation about consent. Chrissy’s best friend Bennigan, voiced by Eugene Cordero, raises questions about the ethics of entering other people’s bodies, expressing discomfort with Chrissy’s proposal of switching bodies because he doesn’t feel right about entering hers. The show doesn’t dwell on the issue—but it smartly explores consent in a quick yet thought-provoking manner, seemingly wholly inapplicable but somehow entirely pertinent to real-life.

“Possession is such an absurd thing, but given the conversations we’re having in this day and age, we wanted to talk about, what if that absurd scenario was real? What would the conversation around that be?” DeVito said. “I’m really happy that in our own way on our own wacky TV show, we’re able to address consent.”

Little Demon deploys absurd, Satanic imagery and storylines to share its messages yet it somehow absolutely works. The storytelling doesn’t just center Chrissy’s perspective, and DeVito said she loves how the show also focuses on Laura’s life, too—imagine a toxic ex returning to your life (to co-parent your preteen daughter no less) except the ex in question is literally Satan. “Laura is, at the end of the day, just a single mom trying to raise her kid, a woman in this world going through all the chaos of that.”

DeVito continued, “It may be an absurd lens, but there’s something so many women can relate to—the horrors or frustrations of being a teen or a single mom, so many everyday experiences but with a silly, darker twist.”

Family is, in many ways, the heart of Little Demon—both within the show and off-screen. It’s a story of “navigating adolescence and family with what you’ve been given, accepting your family is who they are,” DeVito said. Chrissy’s father is the literal devil, and her mother is often brutalizing demons in the garage. “But on a very primal level, they all want to get along and have some semblance of a ‘normal family.’ They do love each other or strive to at least.”

And then, of course, Chrissy’s father Satan is voiced by DeVito’s dad—the inimitable Danny DeVito—and her brother, Jake, is a writer on the show. Plaza “has become like a part of a family as well,” Lucy DeVito said of her co-star. (Plaza also grew up with another writer on the show, Seth Kirschner.) “The whole thing is a family affair. We just throw out all kinds of ideas, be them genius or really shitty, because we feel like we’re in a safe space having fun.”

The adult cartoon genre is pretty saturated these days, but by finding niche, absurdist, and hilarious entry points to analyze gender and power and allow female characters to be as disgusting as their male counterparts, Little Demon brings something new—and charmingly, demonically feminist—to the table.

New episodes of Little Demon premiere on FX Network on Thursdays at 10 p.m. ET and stream on Hulu the next day.