labor The Bear and the Contradictions of Work

The Bear helps us see the struggles that make work difficult and the commitments that make it meaningful. If we want to understand why work matters, and what workers might be longing for, we have to recognize both sides of this balance sheet. 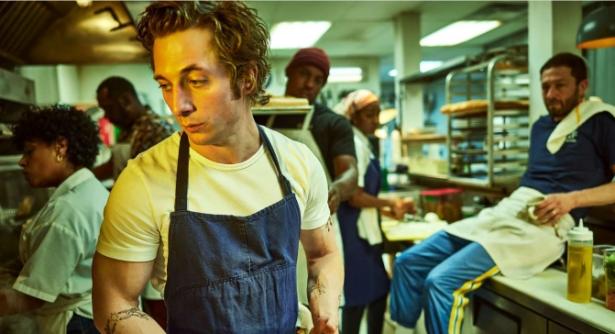 Hulu’s series The Bear, oddly labeled as a comedy, takes viewers inside a hectic, crowded, struggling Chicago sandwich shop that Carmy Berzatto (Jeremy Allen Wright) inherited from his brother, Michael, who committed suicide. The store is a chaotic mess and deep in debt, but Michael’s best friend Richie (Ebon Moss-Bachrach) and most of the long-time staffers want to keep his “system” in place. Carmy left his career as a James Beard award-winning high-end chef to try to fix things, and one of his first acts is to hire a young professionally-trained chef, Sydney (Ayo Edibri) as sous chef. The Chicago setting (city of big shoulders, hog-butcher to the world), the shop’s identification as home of the “Original Beef of Chicagoland,” and the gritty, sweaty, noisy work make for a clearly working-class story. The series has drawn acclaim for its writing, performances, and depiction of food service work.  Restaurant workers have chimed in on Twitter and in comments on reviews to highlight how well The Bear captures life in the kitchen.

An old, struggling restaurant is an ideal setting for a series about work, and it proves useful for exploring how work has – and has not – changed and how workers feel about their jobs. It captures aspects of both the industrial economy that was long typical of working-class jobs and the service economy that has become dominant in the last few decades. While much has been made of the differences between the two modes, The Bear makes clear that they have much in common. Stress, noise, regimentation and surveillance, physical dangers, and economic precarity make kitchen labor a lot like a factory work.

In a New York Times Magazine essay, Carina Chocano describes the series as a commentary on the problems of many forms of contemporary work – long hours, overwhelming stress, conflicts over control, economic precarity. What we see in the shop reflects the state of an economy where everyone is “in survival mode all the time.”

For Chocano, The Bear demonstrates that “The notion that hustle will eventually pay off is an insidious pipe dream.” That dream drives the gig economy, freelancing, and entrepreneurship, but their promises are often false. The Bear highlights that tension through flashbacks showing the demeaning surveillance that Carmy encountered in elite restaurants and the contrast between Syndey’s vision of being her own boss and the challenges of running an independent catering business. Both still have nightmares about those experiences.

The tension between workers’ desire to control their labor and the efficiency of hierarchical structure, another pattern that cuts across industrial and service work, is a central theme in the series. To fix the mess of Michael’s system, Carmy assigns Sydney to implement a “brigade,” a rigidly-defined set of roles and rules that make the crowded, stressful kitchen operate something like an assembly line. Each worker has a specific responsibility, and the lines of authority are strictly enforced. Whether the brigade represents a speed up or just unwelcome regimentation, long-time workers resist. Like automobile workers at the GM Lordstown plant in the 1970s, line cooks express their disdain through sabotage – though in this they target each other rather than the shop itself.

For Sophie Gilbert, writing about The Bear in The Atlantic, the brigade highlights “the ways in which men and male-dominated cultures are set up to fail.” She views it as a form of toxic masculinity, like boardrooms and criminal gangs. Such hierarchical structures, she writes, “poison” these sites “from within.”  Yet in the series, the brigade helps the shop run more smoothly. Gender is involved here, not because of the men’s struggles but because it is a young Black woman who makes the brigade work.

Yet the brigade can’t save the sandwich shop, because it faces bigger problems than chaotic operations or personal conflicts. The building that houses the restaurant is deteriorating, equipment keeps breaking down, the neighborhood is gentrifying, the pandemic disrupted business.  As Chocano puts it, “The system has failed. The place is unfixable.”

Yet the workers refuse to give in, and that is what makes this series so compelling and timely. In this period of the “great resignation” and “quiet quitting,” when so many workers seem to have decided that their jobs are not fulfilling or worth the money, The Bear depicts a crew of workers deeply commited to “this shitty old restaurant,” as Eater reviewer Amy McCarthy describes it. Why? It isn’t that they believe their hustle will bring them great success. The characters seem to understand from the beginning that their best hope, one that is probably out of reach, is to get out of debt and keep the place open.

The answers are visible from the first episode. In between trying to raise enough money to keep the place open for another day and arguing with the staff, Carmy makes his first batch of Italian beef. As he offers tastes to the staff, we see their pleasure at how good it is. That matters to them. They might resist Carmy’s changes and resent Syndey’s presence and authority, but they care about the work itself. That’s why Sydney and the pastry chef both invest extra time to try to create new dishes. Chocano notes that Carmy “can’t spare time” to pay attention, but all three characters – and most of their co-workers – recognize the value of the effort. That their efforts can’t compete with the challenges of just getting through each stressful shift doesn’t erase the underlying engagement with work that is not just hard but often seemingly impossible.

Workers are also committed to each other, and to Michael’s memory. For all the conflict that work generates, one of its most important benefits is human connection. The first episode highlights this, too. We see the solidarity of the long-time staff in their resistance to the arrival of Carmy and Syndey but also in their interactions with each other. We hear it in the way they talk to each other. Reviewers have commented on the yelling and insults that the crew throws around, hearing this as part of the stress and conflict of the kitchen. But trash talk can also be an expression of love among working-class men. To make sure middle-class viewers don’t miss the affection and belonging embedded in all the yelling, episode one includes a scene where the crew gathers for family meal and, perhaps in lieu of grace, do a light-hearted version of the Thanksgiving table ritual. While Richie says he’s grateful for the writer Phillip K. Dick, and the pastry chef expresses appreciation that Richie didn’t put on his usual smelly cologne that morning, line cook Tina (in a great performance by Liza Colón-Zayas) confesses, a little embarrassed, that she is grateful “for all you mofos.” The others tease her for this, but the affection among them is clear.

As all this suggests, reviewers like Chocano and Gilbert are right to see The Bear as a reflection of contemporary work cultures. But as workers express their discontent in multiple ways these days, it’s worth noting that The Bear also helps us see both the struggles that make work difficult and the commitments that make it meaningful. If we want to understand why work matters, and what workers might be longing for, we have to recognize both sides of this contradictory balance sheet.