The water crisis in Jackson, Mississippi, was thoroughly preventable. And it’s a vision of a disastrous future. 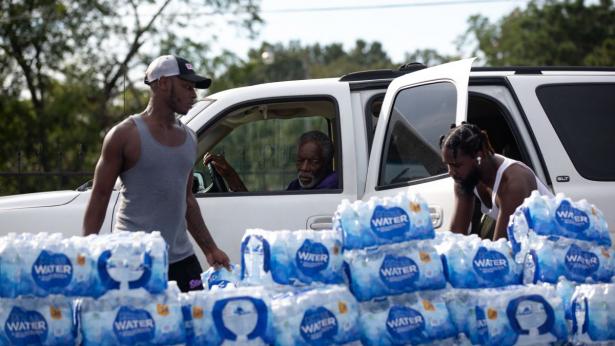 Following torrential downpours last week, Jackson, Mississippi—the state’s capital and largest city—is still without safe water for drinking, bathing, or brushing teeth. The city is home to 180,000 people, more than 80 percent of whom are Black and a quarter of whom fall below the poverty line. The immediate crisis was triggered by flooding in the Pearl River and Ross R. Barnett Reservoir that overwhelmed the city’s long-neglected water treatment infrastructure.

Jackson’s water issues, though, are long-running and well known to residents; they were first told to boil their water in July. Many haven’t sipped tap water for years. This isn’t the first time Jackson has gone without clean water, either. The city suffered through a similar ordeal last winter, when cold weather froze the pipes and residents were told to boil their water for a month.

It’s hard to imagine that a similarly sized, richer, and less Black city—say Fort Lauderdale, Florida, or Providence, Rhode Island—facing a crisis of this magnitude would have received this little national attention for so long. It’s hard to know exactly where to trace the origins of what’s been happening in Jackson: to a Republican state government that has routinely dismissed years of warnings from the left-leaning city? A botched private contract that only worsened the city’s already struggling water systems? Or decades of white flight—sparked by Brown v. Board of Education—that decimated the city’s tax base and ability to furnish basic services? A broader explanation could stretch back further still, to the white insurgency that sought to defeat multiracial democracy with organized terrorism after the Civil War, and to slavery. Climate change only promises to send more floods—and storms, droughts, and fires—crashing into more history and the infrastructure that history has built, or rather dismantled.

The story of Jackson’s water crisis, that is—exhaustively detailed by in-state reporters and organizers—is an all-American one. And it offers a preview for how climate change will play out here. That the issues involved are so ordinary doesn’t make them any less horrific.

Many were reportedly optimistic this Thursday as the state moved to install a rented water pump. But overhauling the city’s water system is expected to cost at least $1 billion, and it’ll cost much more to future-proof it against ever-worsening weather. The entire state received $75 million to upgrade its water systems from the Bipartisan Infrastructure Bill.

In attempting to do that, residents of Jackson face an uphill battle in the face of both the limited federal funds on offer and a state government with limited interest in helping them out. Jackson is not the only city facing that problem. The GOP—whose party line is that Democrats should not be allowed to govern—enjoys trifecta control over 23 states. So long as that’s true, those states will not pass climate policy. But they may well also block whatever federal climate funds they can from being rolled out within their borders, blunting the impact of the limited national policy that does exist via the Inflation Reduction Act.

Here’s one example of how that may play out. State officials and energy offices are charged with administering a $4.3 billion rebate program for energy efficiency upgrades and another $4.3 billion in electrification rebates for installing heat pumps, electric stoves, and other appliances. In some red states, renewable energy and its associated devices have proliferated despite political leaders’ opposition to climate policies, and many utility companies are writing their own plans for ditching fossil fuels, eventually, eager to cash in on the declining cost of wind and solar. But several states are erecting barriers to these market dynamics. Ohio and West Virginia have each passed massive bailouts for coal, and the Texas legislature is moving ahead with a proposal that would erroneously penalize the state’s enormous amount of wind and solar power as a scapegoat for power outages in recent years. Furthermore, as I wrote this week, a growing number of state financial officers are trying to keep financial institutions from even considering climate risks.

It’s also hard to overstate the sheer level of contempt Republican state governors and legislatures have for the Democratic cities within their borders—especially if those cities happen to be majority Black. When the city government of Jackson requested $47 million to repair its water systems after last winter’s crisis, it got just $3 million. “The city of Jackson is grateful for the support that we are now receiving from the state,” Mayor Chokwe Lumumba told reporters this week. “We’ve been going it alone for the better part of two years when it comes to the Jackson water crisis.” Biden has put the ball in the court of Republican Governor Tate Reeves, saying he’s given the state government “everything there is to offer.” Reeves, a Conservative Political Action Conference regular, denied funds for Jackson to make upgrades in the past and blamed city officials for their water troubles.

In advance of a “Stop the Steal Rally” in Jackson last November, Republican State Representative Steve Hopkins dubbed the city “Mordor on the Pearl”—Mordor being the city where evil goblin hybrids and their power-hungry dictator live in J.R.R. Tolkien’s Lord of the Rings books, and the Pearl being the river that runs through Jackson. (Hopkins later apologized.) State-level officials like Hopkins, it’s important to understand, have the ability to ration Jackson’s access to state and federal resources. They also determine what powers cities have to raise revenue—a major issue for Jackson as it’s tried to repair its water system in recent years. Limited funds were part of what led the city to seek out a $90 million contract with the German electronics firm Siemens to upgrade its payment systems.

Hostile state-city relationships are already hobbling the latter’s ability to prepare for rising temperatures. Louisiana’s State Bond Commission has voted repeatedly to deny New Orleans a line of credit to finance power stations for drainage pipes that would protect the city from flooding. Their rationale? City officials’ opposition to the state’s near-total ban on abortion, including pledges from the sheriffs’ office, district attorney, and City Council not to enforce it. Louisiana Attorney General Jeff Landry—who urged the bond commission to reject NOLA’s request—said the state should “use the tools at our disposal to bring them [meaning the city of New Orleans] to heel, quite frankly.”

Liberals have touted states and cities as engines of climate policy if Republicans retake Congress or the White House in the coming years. But clearly, these polities could also be the site of the country’s most dystopian resistance to such policies, and response to rising temperatures. Many are arguably already laboratories for eco-apartheid. States that stand to face a steady drumbeat of climate disasters—and are already dealing with several—are rapidly passing laws to proliferate guns, restrict voting rights, and further criminalize immigrants, taking away access to health care and education. What, to these state officials, will count as an emergency? And how will they respond?

Easy as it is to cast blame on Republican politicians for ignoring suffering, self-described champions of a liberal world order have been more than willing to do the same. Flooding in Pakistan has now submerged a third of the country, displacing some 35 million people, wiping out agricultural lands, and killing at least 1,200. For years at U.N. climate talks, U.S. negotiators on both sides of the aisle have routinely fought back against the idea that rich countries responsible for the vast majority of historical emissions should help other countries adapt to and recover from the mess they’ve played an outsize role creating. While home to just 4 percent of the world’s population, the United States is responsible for 21.5 percent of the carbon emitted since 1959; rich countries are responsible for 90 percent of historical emissions. Pakistan accounts for just 0.4 percent. With climate finance from wealthy governments still sparse, Pakistan and other climate-vulnerable countries—many of which now face urgent and worsening debt crises—will be forced to seek additional loans from the International Monetary Fund as they rebuild and brace for the next storm. Rich countries have failed to deliver even on their own modest pledge of $100 billion per year in climate finance, mustering just $79.8 billion in 2019. Roughly 80 percent of that is loans.

There’s plenty the U.S. could do to help remedy that and other situations, short of paying its climate debt: redistributing its unused, IMF-issued Special Drawing Rights; backing another dispersal of those funds at the IMF; and calling for debt-for-climate swaps as well as more widespread debt forgiveness, so that Pakistan and other climate-vulnerable places can rebuild infrastructure, adapt to more volatile weather, and embark on an energy transition. And the U.S. could enthusiastically support a well-funded loss and damage financing mechanism later this year at the COP 27 climate conference. The question is whether the U.S. is willing to offer the rest of the world any more support than Mississippi Republicans have offered Jackson. Without a concerted national plan to do more, and do better—and take demands for reparations seriously—crises like Jackson’s will be more common than not.

Kate Aronoff @KateAronoff is a staff writer at The New Republic.