Fifty Years On, Matthews and Collett Are Owed an Apology for Their Olympic Expulsion

The Americans’ actions at the 1972 Games had echoes of Tommie Smith and John Carlos. But today their story has been largely forgotten. “The whole history of the Olympic movement is rife with antisemitism and racism,” said Harry Edwards

September 8, 2022 Jules Boykoff The Guardian
Printer friendly
Fifty Years On, Matthews and Collett Are Owed an Apology for Their Olympic Expulsion Published September 8, 2022 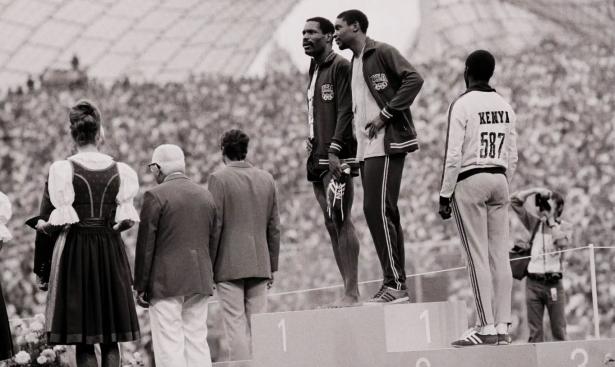 Vincent Matthews (hand on hip) and Wayne Collett (barefoot, holding shoes) chat during the 400m medal ceremony at the 1972 Olympics.,

Fifty years ago this week, two African American athletes, Vincent Matthews and Wayne Collett, won gold and silver respectively in the 400m at the Munich Olympics. At the medal ceremony they threw themselves into the maw of history.

During the US national anthem, the athletes shared the top tier of the podium – which would usually have been reserved for Matthews alone as the winner – an act of unity that broke Olympic protocol. They angled their backs away from the American flag and chatted casually, looking uninterested. Matthews rubbed his chin pensively before folding his arms. Collett stood barefoot, jacket open with hands on hips. As they departed, Matthews twirled his medal on his finger while Collett thrust a clenched fist into the air. 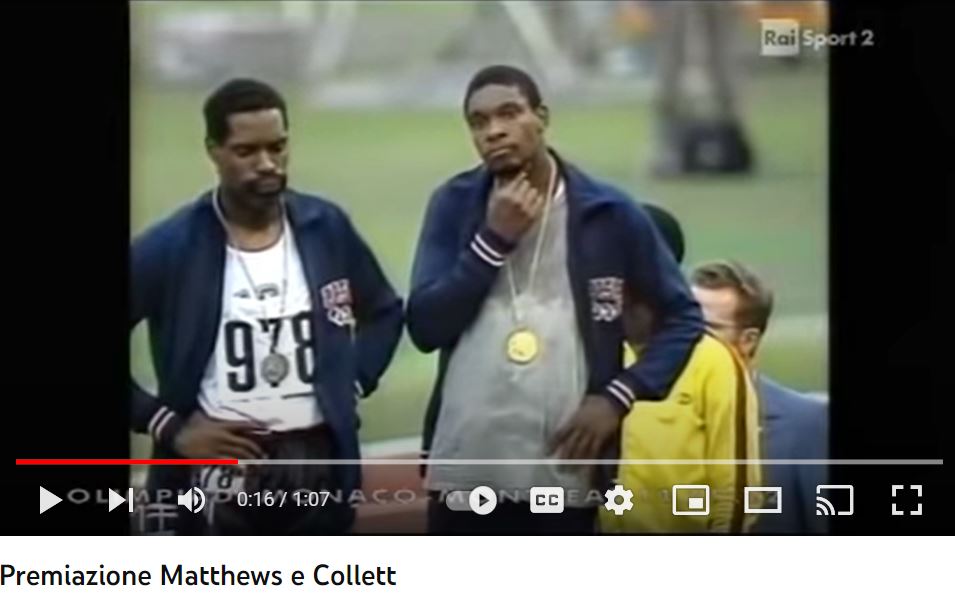 The International Olympic Committee’s response dripped with venom. In a letter to the US Olympic Committee, IOC president Avery Brundage excoriated the athletes’ “disgusting display” before handing down a lifetime ban from the Olympics. The IOC allowed Matthews and Collett to keep their medals, but Brundage warned that: “If such a performance should happen in the future … the medals will be withheld from the athletes in question.”

It is past time that the IOC rights its historical wrong and apologizes to Matthews, Collett, and their families for the draconian punishment that Olympic powerbrokers meted out at the time.

Harry Edwards, the civil-rights stalwart and sport sociologist at San Jose State University, told me, “It’s never too late to apologize and to honor people who not only tried to reflect the Olympic ideals but to live by them, to be willing to sacrifice, to project and make real the ideals of the Olympic movement.”

Brian Lewis, the president of the Caribbean Association of National Olympic Committees, went further. He told me that “the athletes should be given the Olympic Order,” the IOC’s highest honor bestowed upon people who have enlivened the Olympic spirit. Lewis called the IOC’s treatment of Matthews and Collett “a travesty and an injustice,” adding that the ban “should be rescinded.”

The lifetime expulsion from the Olympics was extreme. But what in 1972 was a drastic penalty looks more like a blatantly racist double standard today. After all, only a few days before Matthews and Collett took action, middle-distance runner Dave Wottle inadvertently wore his hat on the medal stand after winning the 800m race. Wottle, who is white, was not rebuked by the IOC. Matthews was 24 at the time and Collett just 21, they had the potential to win more medals if not for the ban.

When I asked Edwards why he thought the IOC issued such a stiff penalty, he said, “The whole history of the Olympic movement is rife with antisemitism and racism.” The IOC has “always fought any kind of protest or demonstration that would tend to highlight and challenge racist activities or actions.”

In the 1960s, Brundage was dubbed “Slavery Avery” for his anti-Black racism. When Edwards teamed up with top-flight athletes to create the Olympic Project for Human Rights in 1967, their demands included the “removal of the antisemitic and anti-Black personality Avery Brundage from his post as chairman of the International Olympic Committee” and the “curtailment of participation of all-white teams and individuals from the Union of South Africa and Southern Rhodesia in all United States Olympic Athletic events.”

To be sure, the IOC’s decision to issue a lifetime ban for Matthews and Collett occurred in the eye of a political hurricane. The Munich Olympics were meant to erase the painful memories of the 1936 Berlin Games, when Adolf Hitler and the Nazis used the event to spread white-supremacist propaganda. But Munich’s Olympic Park was constructed mere miles from the site of the Dachau concentration camp and then, brutally, Jewish blood was once again spilled on German soil when Black September, a Palestinian terror group, took hostage numerous members of the Israeli Olympic delegation. In the end, 11 Israeli coaches and athletes were killed, as were five Palestinian militants, and a German police officer.

Avery Brundage insisted that “the Games must go on”. And after a 24-hour and nine minute pause, they did. In Brundage’s official statement, he conflated the horrific attack with a successful campaign to keep the Rhodesian Olympic squad from participating in the Berlin Games because of the country’s racist policies. Under pressure from numerous African nations, Black athletes and their allies, the IOC withdrew its invitation to Rhodesia on the eve of the Games. “The Games of the XX Olympiad have been subjected to two savage attacks,” Brundage stated. “We lost the Rhodesian battle against naked political blackmail.”

Two days after the “Munich massacre,” amid this pianowire-tense, politicized context, Matthews and Collett won their medals and climbed the podium.

In his memoir, Matthews wrote, “For me, not standing at attention meant that I wasn’t going along with a program dictated by Number One: those John Wayne types – my Country right or wrong.” Although the athletes suggested they were not carrying out a protest – just like Wottle when he accidentally wore his cap on the medal stand – both expressed dissatisfaction with the way Black people were treated in the US. Collett said of the national anthem, “I couldn’t stand there and sing the words because I don’t believe they’re true. I wish they were. I think we have the potential to have a beautiful country, but I don’t think we do.”

Matthews and Collett have slid silently into the folds of history. This contrasts sharply with the unforgettable protest at the 1968 Mexico City Olympics when John Carlos and Tommie Smith stood atop the medal stand and stabbed their black-gloved fists skyward to protest injustice. Although both athletes experienced significant struggles in the wake of their action, they are widely celebrated today. Barack Obama honored them at the White House. In 2019, they were inducted into the US Olympic and Paralympic Hall of Fame. Even the official Olympic Channel praised Carlos and Smith as “legends,” calling their act of dissent “one of the most iconic moments in the history of modern Olympic Games.”

When it comes to Matthews and Collett’s action, Edwards emphasized that protest timing can be more important than messaging. He noted that because social movements were on the decline in 1972 and a racial backlash was in full force, “There was no broader context for protest that they could use to frame up what they were doing,” making their act of dissent largely illegible to journalists of the time, especially because so few of them were African American.

Although Collett died in 2010 and Matthews is famous for avoiding the press and not looking backwards, the 50-year anniversary of their medal-stand action is the perfect time for the IOC to express regret and to make amends.