Three new movies recall the 1930s gangster movie era, but with a twist. They sketch the outlines of a dysfunctional social and economic reality by focusing on people who are caught in the gears of the system, in one way or another 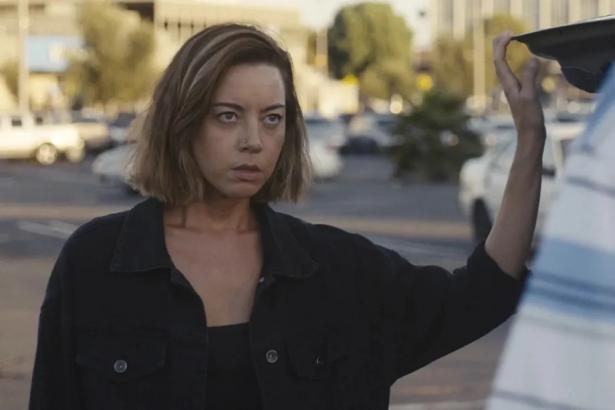 For a brief period in the 1930s, after the birth of talkies but before the self-censorship of the Hays Code, Hollywood was fascinated with movies about a certain type of man: the gangster. He represented a problem, the criminal life, but was also undeniably a product of the system — one in which the Depression was taking hold. At the time, theater attendance was plummeting, and cinemas were closing. Thanks to sound, the shady dames and gangsters and gunshots could now be heard; showgirls could now dance on a chorus line to music; you could now listen in on innuendo and lingo. The results weren’t always great — but from about 1930 to 1934, they could get people desperate for distraction in the door.

The iconic films of the era were the gangster movies like Little Caesar (1931) and Scarface (1932), about men who were usually poor, from immigrant backgrounds, and turned to a criminal life in order to make money. They came into contact with “respectable” society because of what they offered: booze during Prohibition, gambling, worlds of underground pleasures and forbidden vices. As the film scholar Robert Sklar puts it, “Hollywood’s gangsters stood at the very center of their society’s disorder — they were created by it, took their revenge on it, and ended finally as its victims.”

So ultimately, gangster films were about the systems, institutions, and societies that create the gangster. Sklar says they “condensed social conflicts and disorders into the ambitions and dreams of their heroes.” Sitting out in the cheap seats, you were quietly getting a taste of what was wrong with society.

I wouldn’t go so far as to say that we’re experiencing a new age of the social realist picture, in part because Hollywood is mostly in the superhero and franchise business these days. But that doesn’t mean you can’t find movies that try to address the messed-up world the audience lives in, from racism and gender-based violence to climate change and gun violence.

Yet the subgenre that feels most married to the gangster pictures of old isn’t about gangsters, exactly. Instead, it’s about young people stuck in bigger systems they can’t control and don’t really know how to navigate. As often happens, three of this summer’s movies come at that subject from slightly different angles, each featuring Gen Z or millennial protagonists. They’re at the center of their society’s disorder, created by the economic and social systems of contemporary America and trying to take their revenge, with middling degrees of success.

Two of them are comedies, albeit very dark ones. Bodies Bodies Bodies, directed by Halina Reijn, centers on a bunch of rich kids and one boyfriend (Rachel Sennott, Amandla Stenberg, Chase Sui Wonders, Myha’la Herrold, and Lee Pace) who gather for a rager of a weekend at a house owned by the parents of another friend in the group (Pete Davidson). A huge storm hits, the power goes out, and while they’re holed up inside the palatial estate they discover one in their number has kicked the can. From there, things get messy. Real messy. 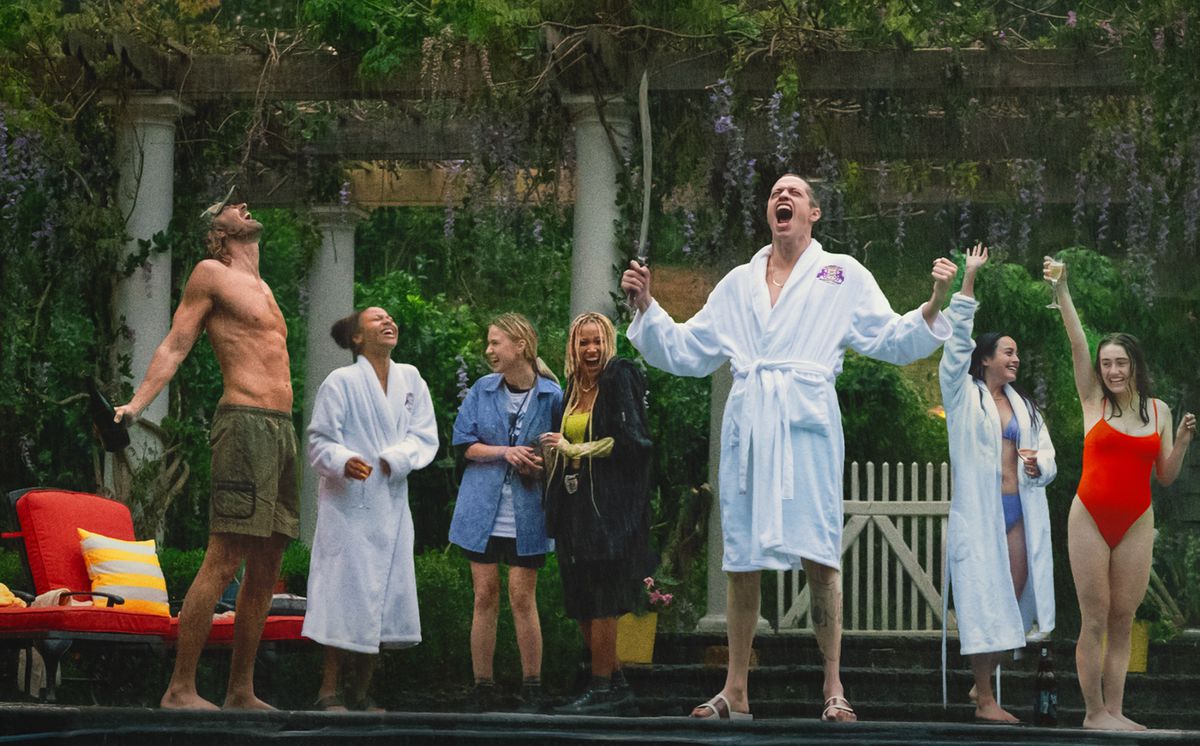 Bodies Bodies Bodies is satirical, skewering the one-upsmanship of any highly privileged group of people who want to maintain their privilege on the one hand and speak in progressive idiom on the other. (“Don’t call her a psychopath. It’s so ableist.” “You’re always gaslighting me.”) But the real protagonist of the film is level-headed Bea (Maria Bakalova), an immigrant who is brought into the group by her new girlfriend Sophie (Stenberg) and is struggling to find any way to relate to these people. She discovers that all of their open-mindedness can’t really find a place for the reality of her life, her job, and her experiences. And she has to literally fight to stay alive.

Bodies Bodies Bodies pairs well with Quinn Shephard’s Not Okay, about a 20-something aspiring writer named Danni (Zoey Deutch) whose attachment to social media and wealthy upbringing has long rid her of anything resembling shame. What Danni has is an unremarkable life, living in Bushwick and working at an online magazine; what Danni wants is to be famous. Also, to get her co-worker Colin (Dylan O’Brien) to know her name.

One night, high and alone in her apartment with her guinea pig, Danni cooks up a scheme that involves pretending to be in Paris for a week. But when a bombing happens in actual Paris, things go sideways.

In Not Okay, the villain is Danni, but she’s also the protagonist — not really an antihero, but certainly not someone you want to root for. But the bigger villain is internet brain, or maybe internet fame, the kind of social structure that’s been constructed with rapid speed that dictates your worth by likes and comments, and, more importantly, by whether other important people recognize you. And like the gangsters of old, the system eats her alive.

But the best of this trio isn’t a comedy at all — it’s Emily the Criminal, directed by John Patton Ford and starring Aubrey Plaza in the title role, flexing some dramatic chops. (It’s worth noting that a few years ago, Plaza also starred in Ingrid Goes West, perhaps the ur-text for the millennial malaise mini-genre.)

Emily leads a life that’s uncomfortably familiar to most millennials, or at least those of us without a familial safety net to lean on. She went to art school, took out $70,000 in student loans, and then wasn’t able to finish school. She can’t get a high-paying job because of a blemish on her permanent record, so she’s stuck working in catering while paying LA rent and hoping she’ll find a way out of this mess. That way finds her, thanks to a co-worker. And it’s really, really illegal. 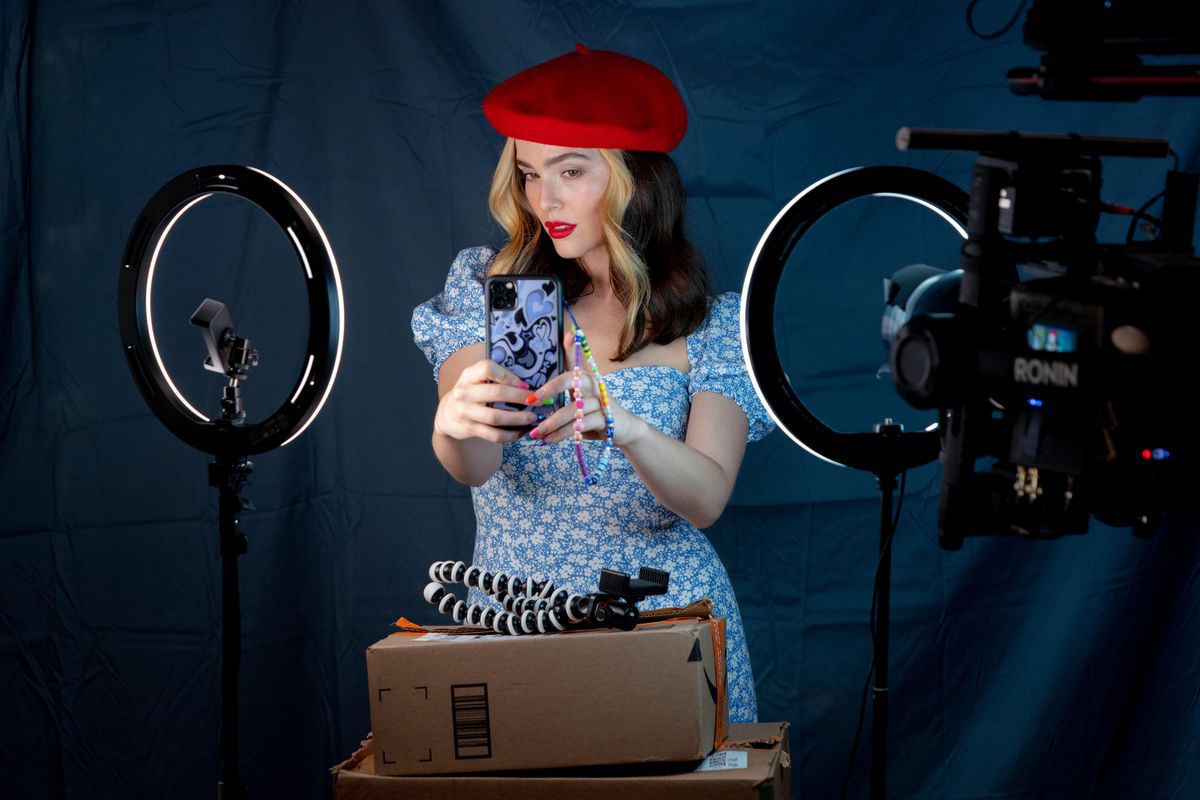 Zoey Deutch in Not Okay.

Emily the Criminal hews most closely to the gangster film dynamic, with Emily drawn deeper and deeper into the operation. But the film doesn’t glamorize any of that. Instead, we see her buffeted on all sides by a system that gives her virtually no other choice. There’s the boss who scoffs at the idea that she should have rights, since she’s just a contractor, without a union to protect her. There’s the woman who runs an advertising agency who gets angry at Emily for not taking a six-month unpaid internship, saying that when she was her age, she was the only woman in a room full of men, and that Emily is just a spoiled brat for needing a paycheck. There’s the student loan company that only applies money to her interest, not her balance, a practice that leads to ballooning, unpayable balances. And there’s the hiring manager who lies to her about not performing a background check in order to lure her into a trap.

It’s a mess out there, and Emily the Criminal plays like a thriller precisely because Emily is less and less willing to put up with it. What she wants is freedom. Whether she’ll get it depends on how much she decides to go along with what the economy allows.

All three of these movies, interestingly enough, don’t focus on men; they’re about women who are almost entirely unlikable, albeit for different reasons. (Not Okay even carries a tongue-in-cheek “content warning” for an unlikable female lead.) They’re young, they live in a world dominated by a widening wealth gap and the fake reality of the internet, and they’re desperate to do whatever it takes to get ahead, each in their own way.

But in principle, these do what the old social realist pictures do: sketch the outlines of a dysfunctional social and economic reality by focusing on people who are caught in the gears of the system, in one way or another. In painting that picture, they capture a generation on the brink. That also makes them a lot like the films of the Depression, barely 90 years later. What goes around sure does come back around.

Millions turn to Vox to understand what’s happening in the news. Our mission has never been more vital than it is in this moment: to empower through understanding. Financial contributions from our readers are a critical part of supporting our resource-intensive work and help us keep our journalism free for all. Please consider making a contribution to Vox today.