This tell-all tale gives essential background to understanding one of the most notorious figures in modern U.S. politics. 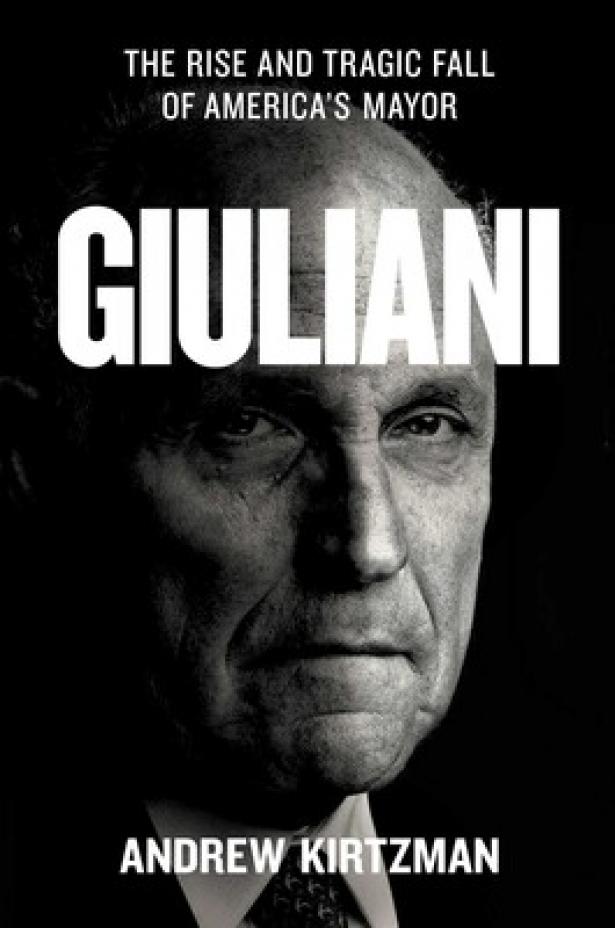 Rudy Giuliani went from hero to zero. As mayor, he guided New York City and the nation through the trauma of 9/11. Twenty years later, Sacha Baron Cohen captured him with his hands down his pants and cameras rolled as dye ran down his sweaty face. America laughed.

Before he was mayor, Giuliani was US attorney for the southern district of New York and US associate attorney general under Ronald Reagan. He frog-marched wayward bankers across trading floors, to the delight of all except Wall Street and civil libertarians.

As mayor, Giuliani ruled the city as only a former prosecutor could. He demanded loyalty and brooked no dissent.

Andrew Kirtzman’s first biography was called Rudy Giuliani: Emperor of the City. In his second, the author describes an “authoritarian” mayor. According to her sister, the mayor’s mother, Helen Giuliani, “liked” Mussolini. Her husband, Harold, was a stick-up man and leg-breaker for the mob and did prison time at Sing Sing.

Under Giuliani, New Yorkers felt safer than they would under Bill de Blasio or, now, Eric Adams. But Giuliani broadcast disdain for the city’s minorities and lacked the temperament, capacity for consensus and deep pockets of Michael Bloomberg, his billionaire successor. All too often, Giuliani simply acted like a thug.

After 9/11, he ran for president, made money as a lawyer then became a Trump flunky. Now, thanks to his work to advance the former president’s big lie about election fraud, he is being targeted by prosecutors in Fulton county, Georgia and his law license is suspended. Think of a malevolent Inspector Clouseau.

Apparently, Giuliani is conscious of his decline. On the other hand, he has said: “I don’t care about my legacy. I’ll be dead.” That quote leads Kirtzman’s introduction.

As a reporter on NY1, Time Warner’s 24-hour local cable news channel, Kirtzman covered Giuliani from the campaign trail to city hall. On 11 September 2001, he was there with the mayor in lower Manhattan. He witnessed Giuliani’s strides, his missteps and his spectacular collapse. Kirtzman’s new subtitle, The Rise and Tragic Fall of America’s Mayor, says it all.

The book is masterful and engrossing. It is girded by more than 40 pages of endnotes. The author and David Holley, his researcher, have performed yeoman work. They capture what made the man tick and what led to his fall from grace. Kirtzman’s critique is leavened with bittersweet impressions and references to Giuliani’s accomplishments.

On election night 2020 and after, the former mayor helped Trump resist the will of the people. The social fabric was theirs to torch and shred. Giuliani’s self-righteousness complemented Trump’s refusal to acknowledge defeat. The soon-to-be ex-president offered Giuliani another opportunity to seize center stage. If Trump wouldn’t name him secretary of state, he could at least cosplay as a presidential lawyer.

Kirtzman’s book ranks with other essential biographies such as Rudy! by the late and great investigative reporter Wayne Barrett and the more favorable The Prince of the City by Fred Siegel, an urban historian and Giuliani adviser.

Kirtzman gets Judith Nathan, Giuliani’s third ex-wife, to truly dish the dirt. She says Giuliani’s crushing failure in the 2008 presidential primary left him broken and clutching the bottle. She credits Trump for providing shelter.

“We moved into Mar-a-Lago and Donald kept our secret,” she says.

As Kirtzman puts it, Giuliani “dreamed of becoming president from a young age, [but] blew his big moment when it arrived”. In the torrid aftermath, he spoke to therapists but, to quote Nathan, was “always falling shitfaced somewhere”.

The couple are divorced but their antipathy continues to smolder. Characteristically, Giuliani has offered a different explanation for his stumbles and falls. He played baseball as a youngster and developed “catcher’s knee”. Does anyone really believe Giuliani was ever a budding Yogi Berra?

Anthony Carbonetti, Giuliani’s chief of staff at city hall, is also a family friend. He also talked to Kirtzman, targeting Nathan while delivering a backhanded defense of his former boss. He told Nathan to “stay the fuck” out of Giuliani’s life. To Kirtzman, he opines: “If you spent an extensive amount of time with that woman, you’d drink a lot.”

Carbonetti became a conduit between Trump and Giuliani … and, with other members of Giuliani’s retinue, a lobbyist for Qatar.

As Kirtzman makes clear, Giuliani was never short on zeal. For Trump, he sought to become the second Roy Cohn, Trump’s all-time favorite lawyer. From seeking dirt in Ukraine to falsely blaming Dominion Voting Systems for Trump’s loss, Giuliani did it all. His capacity for self-abasement was bottomless.

In the aftermath of the January 6 insurrection, Maria Ryan, a Giuliani associate, sought a pardon and the presidential medal of freedom. She also attempted to get him paid. She failed. Giuliani forgot that even as Cohn lay in hospital, dying of Aids, Trump cast him aside.

Giuliani has testified before a Fulton county grand jury and the House January 6 committee. He is a defendant in defamation suits brought by Dominion and Smartmatic, another election machines company. In Trumpworld, Maga means Make America Great Again. It might also mean “Making attorneys get attorneys”.

Kirtzman’s biography sums things up. Despite it all, two years after the 2020 election he refused to concede, Trump remains the frontrunner for the Republican nomination in 2024.

“Giuliani, on the other hand, [is] finished in every conceivable way.”