Workers at the beloved D.C. bookstore formed the union in January; the city’s first unionized bookstore. The bargaining agreement took less than a year, which came as a surprise to many given that most unions don’t sign a contract that quickly. 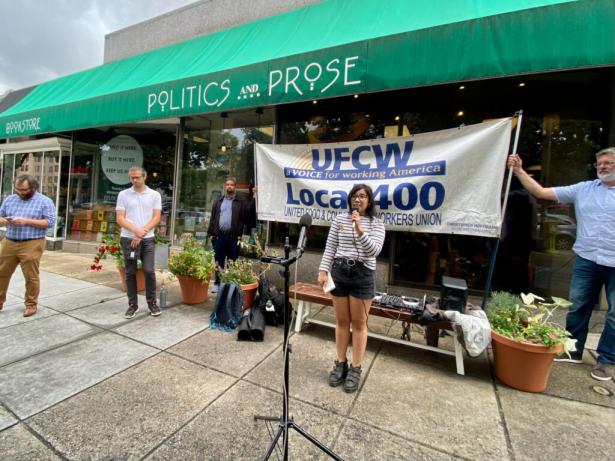 Nine months into bargaining, Politics and Prose workers reached a contract agreement with their employer, voting in favor of a deal that secures wage increases for nearly every union member.

“I am excited,” said employee Isa Salazar during a press conference outside the flagship store on Connecticut Avenue NW. “This is what we started out to do. We were coming from a place of care and concern to improve this workplace that we definitely love.”

John Fisher, who works at the Wharf location, echoed his colleague’s excitement. “We’ve taken a really big first step towards letting everyone know on day one what they can expect from Politics and Prose and what management can expect from us.”

Both Fisher and Salazar will see pay increases under the contract, which workers voted in favor of 33 to 4. At the presser, they were joined by representatives from their bargaining agent, United Food and Commercial Workers Local 400, owner Lissa Muscatine, and At-Large Councilmember Elissa Silverman, who chairs the council’s labor committee.

“In its 38 years, P&P has a proud history of doing right by its employees and providing excellent service to its customers,” said Muscatine at the press conference. “Our commitment to the well-being of our staff is evident again now in our support for this union contract.”

Muscatine added: “What we get out of this contract on both sides is a lot of clarity and a codification, not just of processes and procedures, also what management roles and what management’s responsibilities and rights are.” 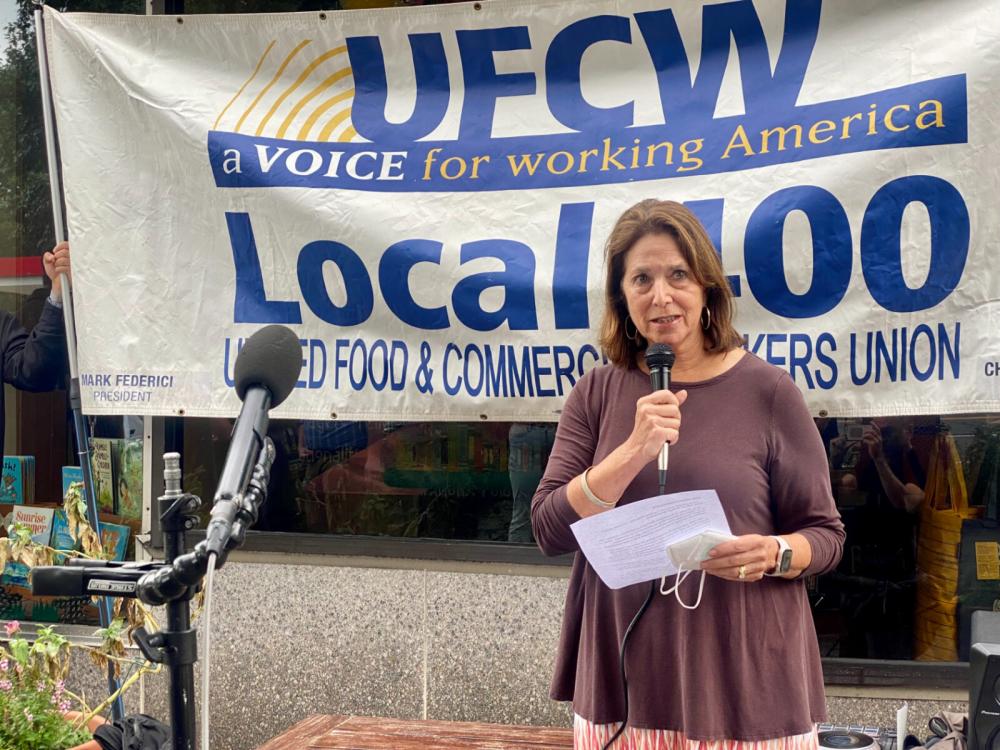 “What we get out of this contract on both sides is a lot of clarity and a codification,” says Politics and Prose owner Lissa Muscatine.Amanda Michelle Gomez / DCist/WAMU

Workers at the beloved D.C. bookstore formed the union in January, become the city’s first unionized bookstore. The bargaining agreement between owners, Muscatine and Bradley Graham, took less than a year, which came as a surprise to many given that most unions don’t sign a contract that quickly. According to a recent analysis by Bloomberg Law, it takes an average of 465 days to ratify a first contract.

The speed of the agreement is also surprising given that early negotiations were tense. The owners originally declined to recognize the union, saying at the time they favored an election so everyone can get a say via voting. They also hired a law firm known for union busting tactics called Jones Day. In a matter of days, and after public backlash, however, the owners dropped Jones Day and recognized the union, which represents roughly half of total staff. The workers had a large social media presence while forming their union, but stayed largely quiet during contract negotiations. Negotiations were less contentious, according to the parties involved.

“Things were a little rocky at first because I think that’s not uncommon when suddenly you’re faced with a major transition,” said Fisher of management’s initial opposition to voluntary recognition. “It took a little time for everyone to realize how much we stood to gain. And once management realized that they had so much to gain by voluntary recognition, they did. And from that point on, it’s been fantastic.”

The owners and the workers say they were able to reach an agreement more quickly in part because both parties engaged in good faith bargaining. Some matters were just a matter of codifying existing benefits, such as the health and retirement plans Politics and Prose already offered.

The first contract includes various protections for workers, such as establishing a process to refuse unsafe assignments and to avoid penalty should they not complete a task when a colleague calls out. In an interview with DCist/WAMU, UFCW Local 400 organizing director Alan Hanson said he was most proud of the wages they secured. The local shared a copy of the contract with DCist/WAMU.

Hanson called the contract language on wages “out of this world,” adding that all but one of the 50 unionized workers at Politics and Prose will get a pay increase under the three-year contract. “When we started negotiations, an entry-level bookseller at Politics and Prose made $15.38 an hour,” Hanson says. “That person will now make $16.25 an hour. And if they were hired before March of this year, they actually get credit for a whole year of service, so they actually go to $16.55 an hour.”

The contract secured minimum pay rates and step increases. Unionized workers will only rely on the merit process and performance evaluations for possible promotions and fostering communication but not pay increases. Instead, they would get an automatic 30 cent increase to their base pay once they work at Politics and Prose for one year. (Coffeehouse staff get a 10 cent increase because they get tips.) They’ll stop receiving the pay bump after they hit their fifth year at the retailer.

For the store’s longest-term workers, those who have been there six or more years, the contract secured a one-time 75 cent increase in year one of ratification. Employees may also get the opportunity for bonuses in year two and three of the contract, depending on total sales for those fiscal years. 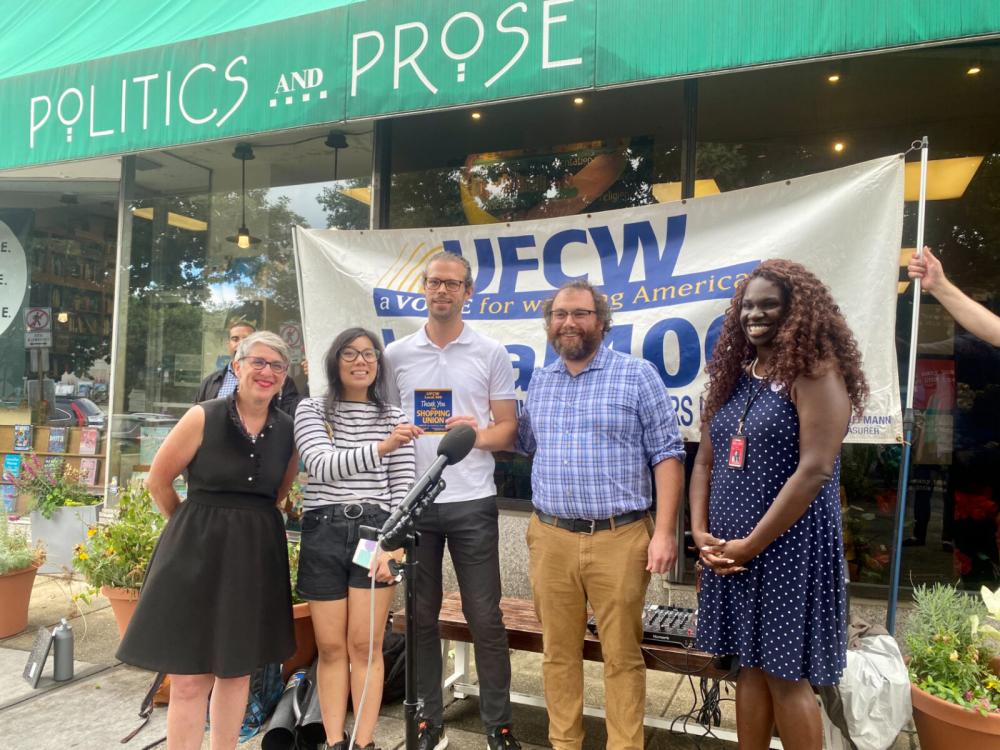 Politics and Prose workers were joined by various supporters Monday when they announced their contract vote.Amanda Michelle Gomez / DCist/WAMU

Hanson says the union was in a better position to bargain for higher wages because of D.C.’s minimum wage law, which is tied to the Consumer Price Index. Minimum wage is $16.10 per hour for non-tipped employees, as of July. The law, which labor unions fought for with Fight for $15, enabled Politics and Prose workers to not only negotiate from a better starting point but could lead to another opportunity for pay bumps when D.C.’s minimum wage law increases.

The contract is intended to protect workers during a time of high inflation with consumer prices hitting 6.3% in July. The starting wage is $16.25 per hour for a bookseller and $18.25 per hour for a shift supervisor, under the Politics and Prose contract, with maximum pay at $20 and $22 per hour, respectively. Hanson hopes the maximums become the floors for the next contract.

“So this really does put us into a great position not only in this contract, but it sets us up for future negotiations as well,” he says.

The wages secured for Politics and Prose are significant compared to many other union contracts. A Bloomberg Law analysis of 182 contracts ratified in 2021-2022 found that 58 had both annual percentage increases and bonuses or other one-time payments. A Reuters analysis of retail wages also found unionized shops earned more money compared to non-union shops.

“We got some things and they got some things. That was something that the union very much wanted,” said Muscatine when asked about budgeting for step increases. “Our finance team had to work incredibly hard to figure out how to make it work, to be honest. But we figured out a way to try to make it work and still assure that this store can stay in business, which is no mean feat coming out of a pandemic.”

It’s more complicated for Politics and Prose than many other businesses because book prices are set by publishers not management. This means Politics and Prose couldn’t pass on increased labor costs to customers in the same way other retailers do.

The contract wasn’t a landslide for the union — Hanson says they were not able to secure minimum staffing levels, for example. Determining the number of employees is under management rights. The contract offers some predictability, as the union fought for, like requiring management to provide workers their schedules two weeks in advance and written scheduling cannot change without workers’ consent. Still, Hanson expects the contract to become the new standard for retailers that UFCW Local 400 is the bargaining agent for, including Union Kitchen.

Peter Ikeler, a sociology professor at SUNY Old Westbury and the author of “Hard Sell: Work and Resistance in Retail Chains,” called the contract a win for workers. He says it’s hard for unions to form and even harder to get a first contract in under a year, so he is impressed by what the bookstore pulled off. He also called the contract language itself “promising.” He said getting guaranteed staffing levels is challenging, as is securing step increases.

“This is really pretty good for a first foot in the door, so to speak,” Ikeler says of the contract. “That’s a good way to see union contracts, because ideally they’re supposed to build and ratchet up over the years. So the next contract, you push for more.”

Amanda Michelle Gomez, Reporter, General Assignment is interested in covering the health and well-being of local residents, as well as the working conditions they face on a daily basis. As a general assignment reporter, she reports on all that and much more. Amanda has written and reported on a variety of topics, from housing to homicides, having worked at Kaiser Health News and Washington City Paper.

DCist is the unofficial homepage of the District. We cover what matters to Washingtonians, whether that’s the latest piece of legislation before the D.C. Council or the best thing to order at the new restaurant around the corner.