The Coup in Chile: What Did Nixon Know and When Did He Know It?

Forty nine years after Pinochet’s putsch, Presidential and CIA documents remain secret. The National Security Archive calls for full disclosure of the covert history of U.S. involvement as the countdown to the 50th anniversary of the military coup begins 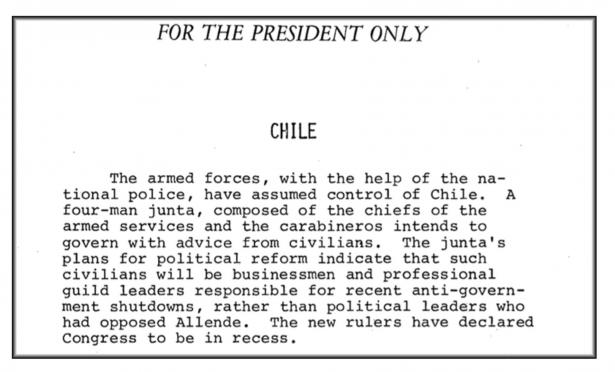 Washington D.C., September 12, 2022 - One day after the violent, U.S.-backed, coup d’état in Chile, the overthrow of Salvador Allende was the very first item in President Richard Nixon’s September 12, 1973, CIA intelligence report—known as the President's Daily Brief (PDB). “Chile’s President Allende is dead and the armed forces, together with the carabineros, are working to consolidate their successful coup,” stated a short summary of principal developments around the world. On page 1 of the PDB, the CIA informed Nixon that the members of the new military junta “are all respected and experienced leaders” but not supporters of democracy. According to the PDB, “the new rulers have declared [the Chilean] Congress to be in recess.”

But on the day the military moved to overthrow Salvador Allende, September 11, 1973, what the CIA informed President Nixon remains TOP SECRET. Forty-nine years after one of the most infamous military coups in Latin American history, the intelligence report in Nixon’s 9/11/1973 PDB on Chile continues to be classified as sensitive national security information. Nixon’s PDB of September 8, 1973, which is believed to contain initial CIA and Defense Intelligence Agency (DIA) reporting on specific coup preparations by the Chilean military, also remains completely redacted, almost half a century later

President Nixon, as the historical record shows, had a vested interest in the Chilean coup. Three years earlier, on September 15, 1970, Nixon had given direct orders to CIA director Richard Helms to “save Chile” by instigating a military coup to block the inauguration of President-elect Salvador Allende, who had been democratically voted into office on September 4, 1970. “Make the economy scream,” Nixon mandated, according to Helms’ notes from the meeting. “Full time job, best men we have.” After Allende was inaugurated on November 3, 1970—despite concerted CIA clandestine operations to kidnap the pro-constitution commander-in-chief of Chile’s armed forces, General Rene Schneider, resulting in his assassination—Nixon convened his National Security Council to order broad U.S. government efforts to destabilize Allende’s ability to govern. “If there [is] any way to unseat A[llende],” Nixon advised his national security team, according to a second set of notes taken by Helms at the November 6, 1970, meeting, “better do it.” 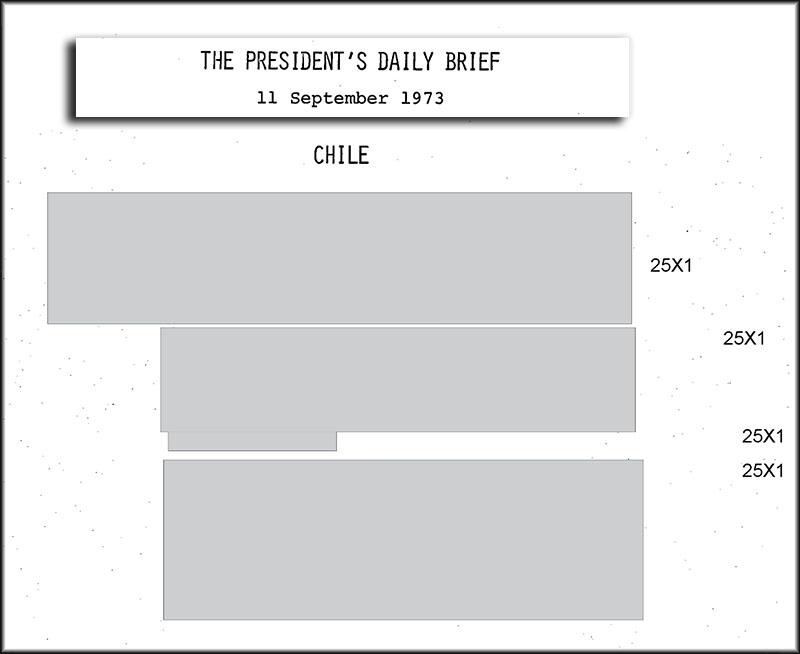 The CIA's briefing to President Nixon on the day of the military coup in Chile--completely censored. (Redactions are white in the original.)

As the countdown to the 50th anniversary of the coup next year begins, the National Security Archive called on the Biden administration and the CIA to fully declassify the PDBs and all remaining records related to covert operations in Chile. “Secrecy over time erodes credibility, especially regarding national security,” according to John Dinges, author of The Condor Years and a member of the Archive’s advisory board. “Continuing to hide key documents from public view” after half a century, he noted, “prevents finding a credible answer to the questions about U.S. actions in Chile.”

Peter Kornbluh, who directs the Archive’s Chile Documentation Project, said the Archive would use the Freedom of Information Act and all legal means to press for full disclosure of the controversial history of U.S. ties to the coup before the 50th anniversary. “Almost half a century later,” Kornbluh noted, “critical records on Chile remain secret”—among them the Nixon PDBs, CIA records on the cases of two U.S. citizens, Charles Horman and Frank Teruggi, who were seized and executed in the days following the coup, and CIA support for the post-coup creation of the repressive Chilean secret police, DINA, including documents on the controversial decision at the CIA’s Langley headquarters in 1975 to put DINA director Col. Manuel Contreras on the CIA payroll. “There is still more to be learned about this dark and sordid episode of covert intervention,” Kornbluh stated, “in order to finalize the judgement of history on the U.S. role in Chile.”

On the day of the military coup in Chile, the CIA presents intelligence information on the progress of efforts to overthrow Salvador Allende to President Nixon. The information remains entirely redacted in this document.

The day after the coup in Chile, the CIA informs President Nixon that the “armed forces, with the help of the national police, have assumed control of Chile.” The PDB on Chile—it is the first item in the briefing paper—reports that the members of the new military junta “are all respected and experienced leaders” and that “the new rulers have declared [the Chilean] Congress to be in recess.”

The CIA and Chile: Anatomy of an Assassination

Kissinger and Chile: The Declassified Record

Chile and the United States: Declassified Documents Relating to the Military Coup, September 11, 1973