They Will Beat Their Swords Into Plowshares

Nor will they train for war anymore.” Isaiah2:3-4 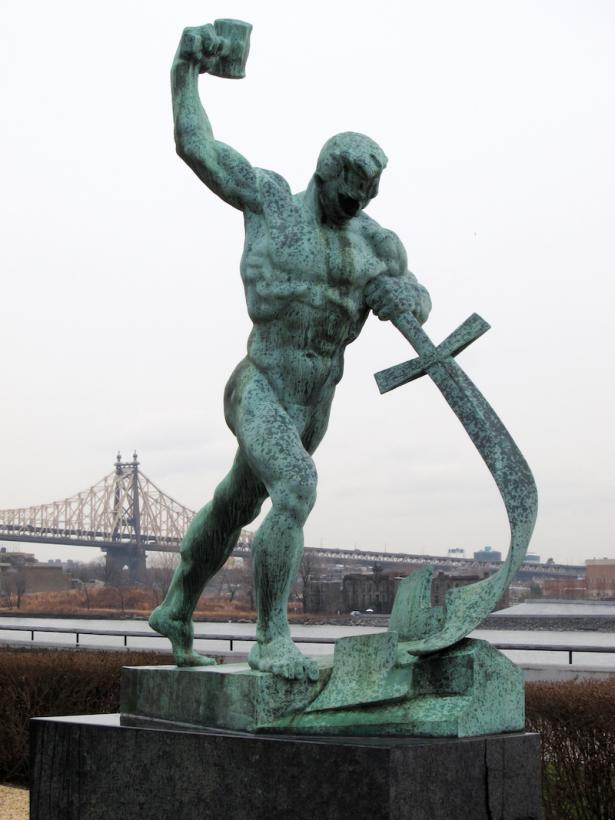 Let Us Beat Swords into Plowshares, a sculpture by Evgeniy Vuchetich in the United Nations Art Collection,Wikipedia

What’s wrong, so profoundly wrong with war that compelled Isaiah to implore for peace (without debate over just and unjust war) almost 3,000 years ago?

War breeds a plague of ills and evils.  Most immediate is the acute tragedy for those directly killed, soldiers and civilians alike, with civilian deaths often being in excess of soldiers’ deaths in recent wars due to urban, aerial and guerrilla warfare.

For US veterans who have returned from war with “soldier’s heart” (Civil War), “shell shock” (1st World War), “PTSD” and “moral injury” (Vietnam, Iraq and Afghanistan), Veterans for Peace captures poignantly the lifelong agony of fighting and killing in war.  “Many of us continue to suffer physical and spiritual wounds from multiple wars; we can tell hard truths.  War is not the answer – it is mass murder and mayhem. War dehumanizes soldiers and scars survivors for life.  Nobody wins in war but the profiteers. We must end war or it will end us.”

War accelerates climate catastrophe. Militarism is the most oil-intensive activity on the planet, growing more so with faster, bigger, more fuel guzzling planes, tanks, and naval vessels. At the outset of the Iraq War in March 2003, for example, the Army estimated it would need more than 40 million gallons of gasoline for three weeks of combat, exceeding the total quantity used by all Allied forces in the four years of World War I.  Between 2003 and 2007, the Iraq war generated more carbon dioxide equivalent in greenhouse gas emissions each year of the war than 139 of the world’s countries released annually.  Re-building Iraqi (and Afghani, Syrian, Yemeni and Ukrainian) schools, homes, businesses, bridges, roads, and hospitals pulverized in these wars will require millions of tons of cement, the most fossil fuel intensive of all manufacturing industries.

Further, the global impacts of more drilling and fracking for fossil fuels to offset sanctions on Russian oil and gas; war-related inflation; and war-related extreme food shortages for millions in Africa and the Middle East have undermined countries meeting their climate targets

Yet, mainstream US and British media have all but eclipsed the record climate temperatures, drought, floods and fires of 2022 across the world with their preoccupation on militarizing Ukraine to defeat Russia.  No doubt this same “monoculture media” will sideline, as before, the many hundreds of Isaiah-like climate scientists across the world, strategizing more non-violent, civil disobedience actions, to wake up the world to the accelerating climate emergencies.

“The first casualty, when war comes, is truth,” are the words of Hiram Johnson (1866-1945), a Progressive Republican senator in California, at the outset of World War I.  The current war in Europe, illegally initiated by Russia, is no exception.  From the popular media and government news releases, who knew that promising negotiations to end the war in late March 2022-early April between Ukraine and Russia mediated by Turkey, were torpedoed immediately after by Great Britain and the US?  Both then-Prime Minister Boris Johnson and Pentagon chief, General Lloyd Austin met separately with President Zelensky and insisted that Ukraine, with both countries’ providing military weapons and training, should stay in the war to defeat and weaken Russia and Putin, specifically.  Zelensky acquiesced.  Since the war began neither the US nor Britain has ever engaged in or shown any interest in diplomacy to bring an early end to this tragedy, with its plague of ills and evils, that has by now grievously harmed millions of lives.  This war is their war too and also a consequence of a two-decade long broken commitment.

The US has failed in its promise given by U.S. Secretary of State James Baker to Soviet leader Mikhail Gorbachev on February 9, 1990, of “not one inch eastward”- a commitment not to expand NATO east of reunified Germany.  This assurance has been violated time after time with an eastward expansion of NATO that is critically threatening to Russia’s security if Ukraine joins NATO, given their shared borders.

“If Ukraine and Russia can negotiate grain exports, prisoner exchanges and a nuclear reactor inspection, they can negotiate an end to this crisis,” states the national feminist peace network CodePink. But only if the US, the major provider of advanced weapons, training and supplies to Ukraine (worth over $110 million per day), supports peace negotiations.

US presidents and presidents-to-be used to boast that the US is the greatest democracy in the world, a beacon to other nations, and the greatest military in the history of the world.  Today, they mainly vaunt our country for its military prowess – despite having barely won a war since World War II, all of which wars the US has illegally initiated.  Isn’t it time to repair our dangerously divided, sinfully unequal country, besieged with mass murders and to join the family of nations as a sibling, not a patriarch; time to become a country that will beat our swords into plowshares, our weapons into windmills…nor train for war anymore.